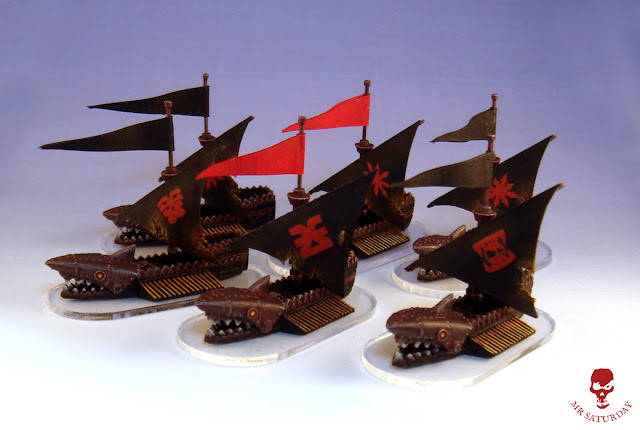 When I first decided to build a Khorne fleet for Man O War, it was the Ironsharks that sealed the deal. How can a man be expected to resist a ship full of blood-crazed murderers that has a giant articulated metal shark's head at the front? Not this guy.

So I painted six of them, two squadrons. The first consists of The Gorger, Mercy of Iron and The Wrathful Tide. The second squadron is The Coward's Due, The Hateful Word and finally The Harmstead.  (The final ship named in honour of the mighty Captain Crooks who sorted me out with three of the Ironshark models in the first place.)

As with my death galleys I wrestled with some thirty year old transfers to add icons to the sails. After some initial failures I got the Microsol and Microset working and they smoothed the geriatric old transfers nice and flat. I think my decision to base them on clear bases was probably wise, as not basing would lead to chipping and I wasn't mad about sculpting waves and such, which is odd for me. I'm usually mad for going crazy on the basing.

These fellows were on my painting desk for a very long time, so I'm super happy to have them finished. That's given me the mojo boost to tackle the last two ships in the fleet, two Bloodships, The Worldeater and the as yet un-named final ship.

As the project has gone on I've decided to tailor my 28mm Khorne warband to work as the captains and crew of various ships from the fleet. It'll be a nice thematic tie-in, don't you think?