Two more drones finished off the first pod (unit) of Martians. These were quick and fun to do. I even found a bit of red weed to add to the bases of one drone. I used the paper technique to affix the legs of the second and third drones, and it worked a treat. They are as solid as they're going to get. I'm pretty happy with the colour scheme, I added less medium to the green glaze on the second and third drones, but it comes out much the same. I think I'm ready to tackle one of the larger assault drones next.

Email ThisBlogThis!Share to TwitterShare to FacebookShare to Pinterest
Labels: All Quiet on the Martian Front, Painting 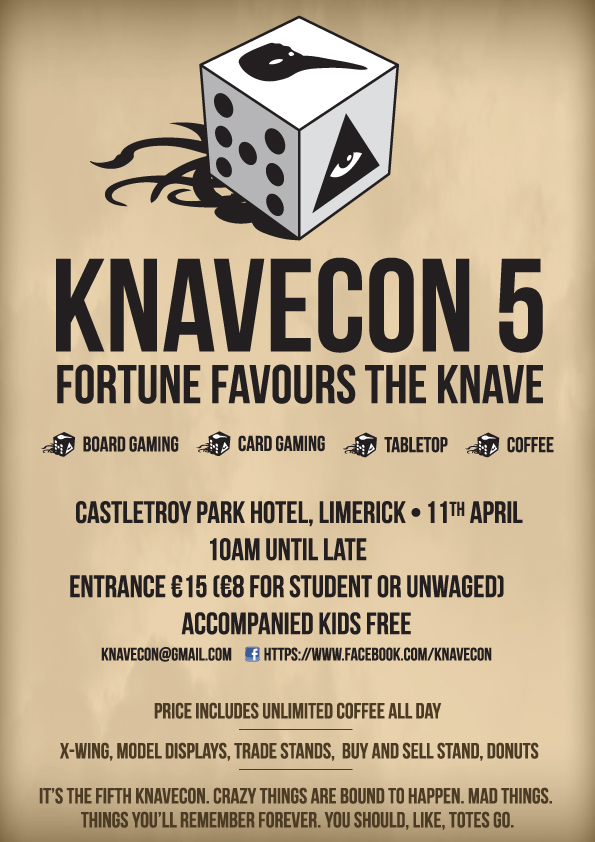 Not long to go now until the next exciting installment of the mighty KnaveCon, which kicks off at 10am on April 11th, which also happens to be international tabletop day, donchaknow.

Lots going on for the 5th KnaveCon including the Nationals for Settlers of Catan and also DICEMASTERS run by Black Cat Games, who are joining us for the first time. The return of the legend that is KnaveCon werewolf and a new section - KnaveCon Ninjas, for younger gamers to learn some new games, and even a bleedin' raffle! Added to that all the usual fare, free coffee, heart-attack inducing donuts, trade stands, more games than you can shake several sticks at and the love and companionship of your fellow games.

For more information, take a stroll over to Victor Gannon Games, where you'll find the abode of the captain of the good ship KnaveCon. You'll also find us on Facebook.

So pop along and I'll see ye there, especially those brave souls who can stick it out into the wee hours of the KnaveCon night-shift.

Email ThisBlogThis!Share to TwitterShare to FacebookShare to Pinterest
Labels: KnaveCon

All Quiet on the Martian Front - First Test Model

Having settled down on a few ongoing projects for the foreseeable future, I am now flitting between them. I'm finding this is keeping my painting mojo high. I decided to crack open the box for the 15mm game All Quiet on the Martian Front and have a go. This drone was the test model for the Martian side. I love the design for the Martian Front models, human and Martian side alike, though there's a lot of bits for some models.

He's still quite big, being on a 40mm base. A bit of a bugger to assemble, with the fitting for the legs being a couple of millimetres too wide for the legs. A touch of greenstuff sorted that though. Painting was very quick, as I decided to keep to a simple metallic scheme. I'll introduce a second darker metal tone on larger models. I did hit him with a green glaze around the joints and such, but it's pretty subtle, so I'll turn it up a little for the next drone. They come in pods of three, so I'll have the scheme down by the time they are done. After that I might tackle one of the huge assault tripods.

The base is from Gladius Game Arts with some added debris from Sgts' Mess, which is a goldmine of various goodies. The bases come in urban and rural, these being the rural ones. They larger bases come with train lines, broken walls etc. I plan on hunting down some HO scale early 1900s automobiles for burned out wreckage on the larger bases. 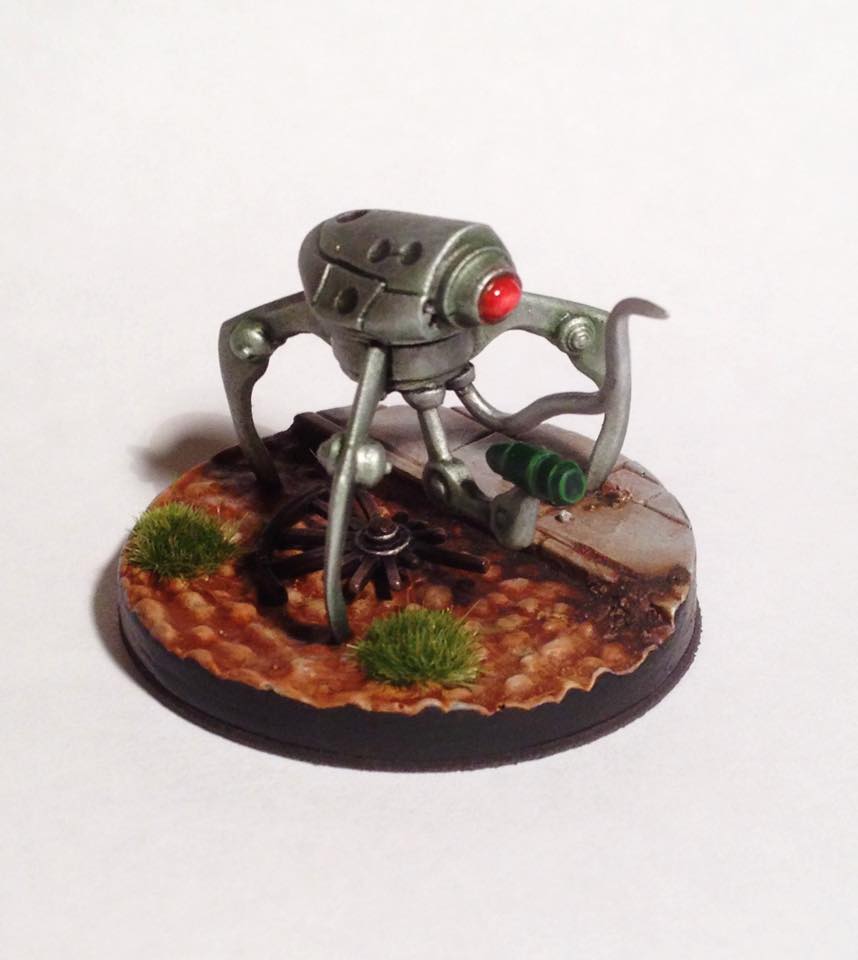 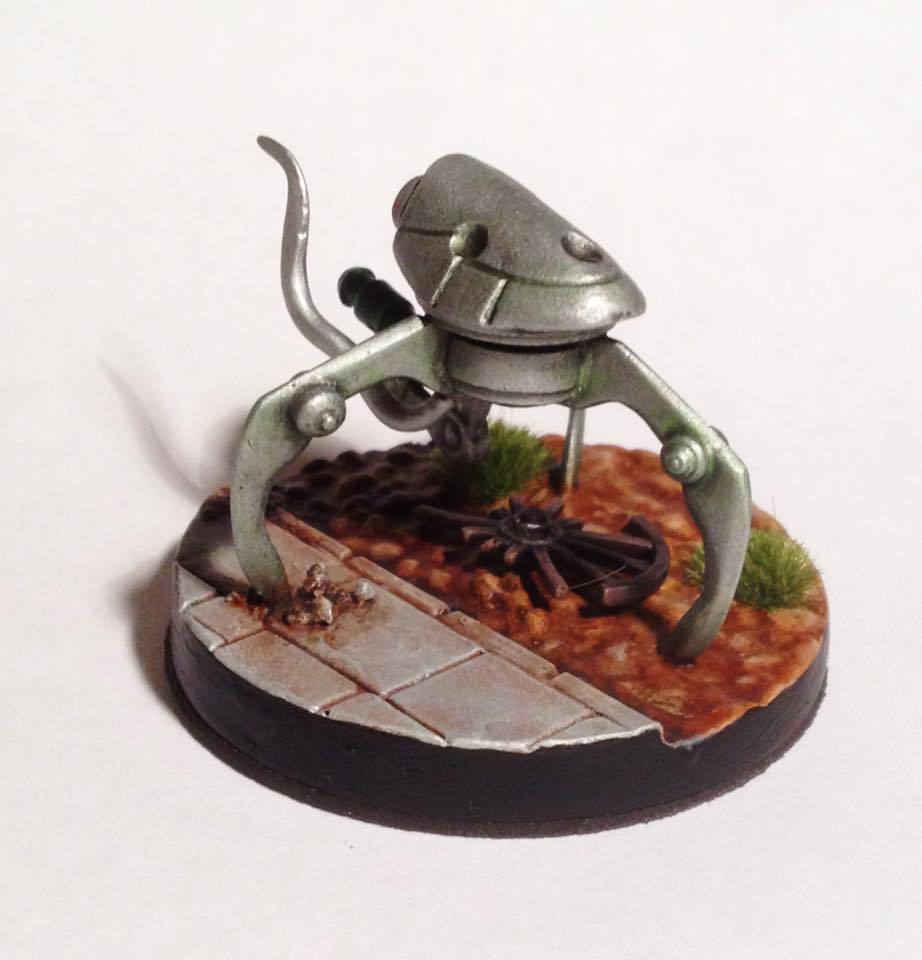 Email ThisBlogThis!Share to TwitterShare to FacebookShare to Pinterest
Labels: All Quiet on the Martian Front, Painting

Continuing on with the cult, I painted one of my all time favourite miniatures, the cult magus with scanner. He took some tracking down, but once I had this fellow it wasn't long before I had to paint him. As with many Olley sculpts he's a riot of gorgeous texture, and was a treat to paint. He painted up nicely in my adeptus mechanicus scheme, and has given me a need to paint more Olley cult models.

I've been collecting Rogue Trader robots of late, and this model connects them back to the cult. I gave him the name Mijur, as, well, his advanced communication device demanded it. Not everyone has an ultravox... 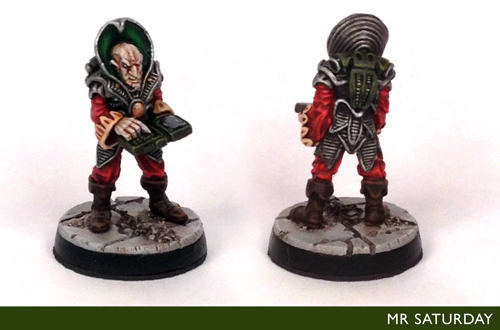 Here he is with his castellan friend. Ultimately he'll have one of each of the original robots under his command. Inbetween playing pong and updating his Facebook status. 'Fighting crumbling human resistance on Thelema with brood. The fools are doomed, lol.' 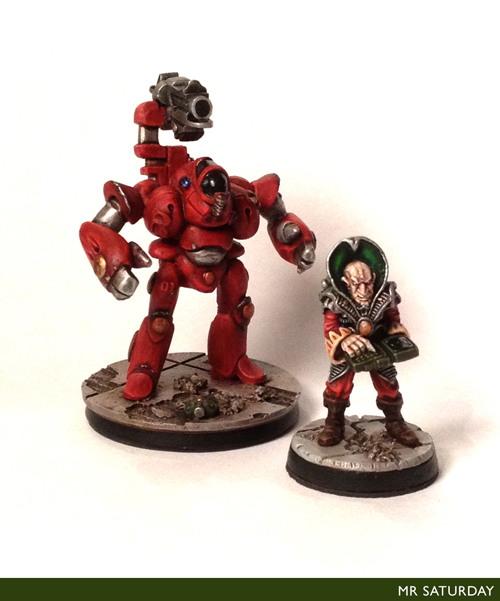