A bit of a red letter day here on Mr Saturday's Mumblings. After a serious amount of sawing, shaving, cutting, glueing, sculpting, casting, cursing, filing, pinning and eye-straining, the first unit of fimm are assembled. Oh yes. I will put aside for a moment the fact that that they still have to be actually painted, and that I have another unit of twenty to do after that. Such thoughts could drive a man from his wits. Let us instead concentrate on the fact that twenty fimm warriors now stand ready to defend their lands from all comers....aaaaand possibly do a bit of raiding too. 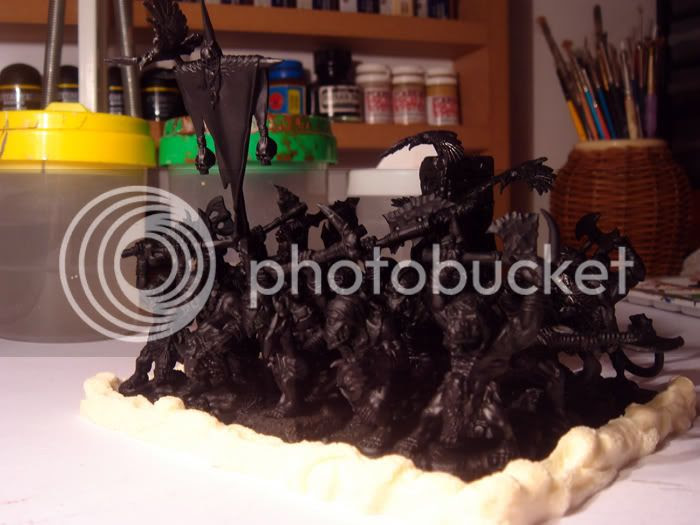 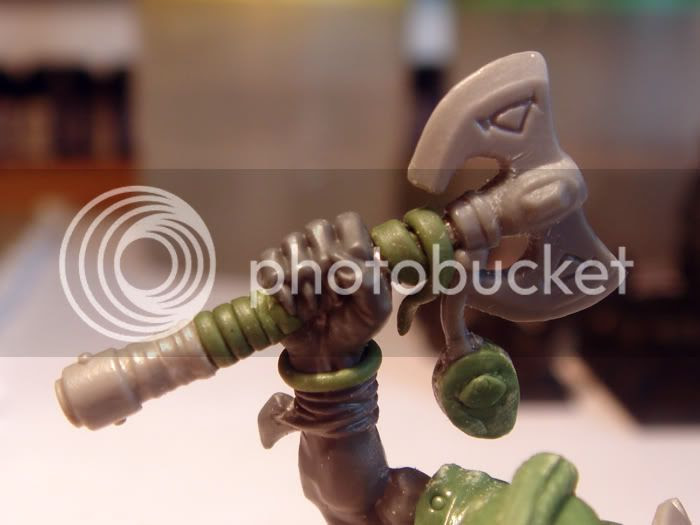 In other news, after seeing the fine weapons borne by the fimir of clan Myeri on Fimm McCool's Games Orkshop, I resolved to supply my own fimm with such fine arms as soon as possible. Thanks to Old Fogey on TWF, I soon had a cache of dwarf axes in my sweaty grasp. I wanted to have the axes look vaguely Celtic, and a lot less finely crafted than dwarf weapons, as the shearl artisans of a fimir clan have limited resources at best. Here's my first effort at such a weapon.

Before I delve in to painting the fimm, I have some work to do on the movement trays. Base X of War have been very accommodating with my awkward orders, and I just need to administer a little nip and tuck before they are ready for priming, and then it's full belt into the paintravaganza.
Posted by Mr Saturday at 10:30 PM 6 comments:

I'm a bit of a Bloodbowl fan. It's arguably one of the best games ever published in my oh so humble opinion. Despite it's strange relationship with Games Workshop (it baffles me why they don't support it more fully) it has a special place in a lot of gamer's hearts. So the upcoming release of Bloodbowl Team Manager from Fantasy Flight Games is getting a place on my shelf, I can tell you. After the glowing review from Garagehammer I find myself eagerly awaiting the release of the game.

Posted by Mr Saturday at 2:47 PM No comments: 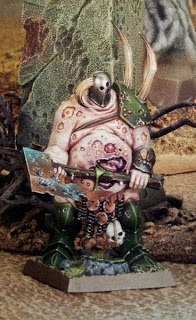 I spotted this on Hobby Horse, a photo of the new Nurgle lord out next month. Very nice, I have a soft spot for Nurgle (it's probably infected) and this guy is great. I'm a fan of the new plastic characters, I must say. I'd like more options on the sprues, but it's going in a great direction. GW seems to be playing a blinder lately. Keep it up... 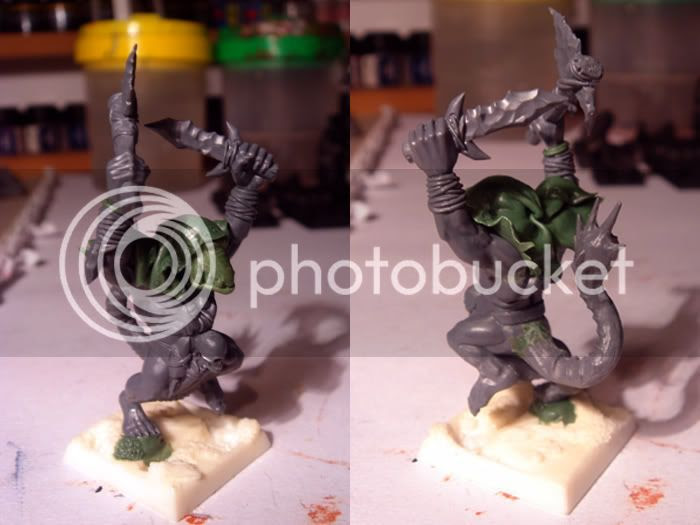 It's been a while since I posted any assembly work as I've been mostly working on fimm warriors. This fellow is the second last guy for my first unit of twenty fimm warriors, a hooded fimm pelting along at full tilt. Only one more to go, but I do have a second unit of twenty to do.

I think I'll intersperse fimm warrior making for unit two with putting the war-dogs and human horsemen together. After that it's just the battle standard bearer and I have two thousand points assembled. I do have plans for another five hundred points after that, but one step at a time...
Posted by Mr Saturday at 11:24 PM 6 comments:

Fimir - Other Clans, Other Fans, Part 2

Since the first part of this article was posted, more fimir goodness has come to my notice. It seems the fimir are still hanging in there by the tips of their fingernails, the recent press they got in Storm of Magic having done the race no harm at all in raising their profile. 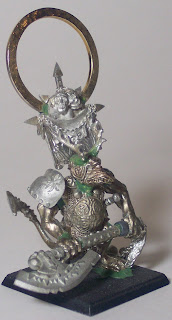 I've gotten more shots of Steve Mack's upcoming fimir warband. The great conversion jobs he has produced make me wonder about carving up a few nobles myself, as blasphemous as that sounds.

The components he's used on the models fit well, the great axe wielding noble really is nicely posed and is very convincing as a converted model, once he's painted he'll be a bit of a show stopper, methinks.  The musician in particular is a favourite, and give a little insight as to what we might have seen if the fimir had had more models produced.

While I was on holiday one of my posts was commented on by a fellow that goes by the moniker of Fimm McCool. Taking a look at his blog I was astounded to find another madman attempting to build a fimir army. Not only that, but his influences for the army were so similar to my own I thought 'This is a type of goat moment' Allow me to explain. 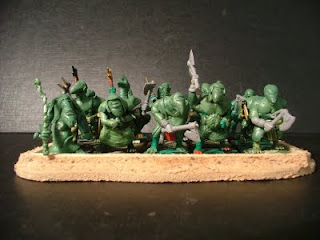 The internet is a wondrous place. No matter what your predilections, likely there is a site, blog or chatroom for you. Such is the wealth of material that were one to type flaming goat wearing tophat eating a bowl of shrimp into the search engine, the answer would be: specify type of goat.

The fimir are a niche army in a fairly unusual hobby, so the chances of finding another current blog concerning the building of an army of them citing influences like the Dark Crystal and Celtic mythology are fairly remote. Cue Fimm McCool's Games Orkshop. 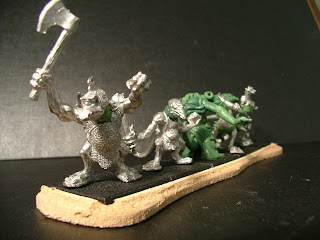 Fimm has taken the Henson influence one step further, actually basing some of his characters on Henson's creations. There's a goodly dose of Cletic myth in there too, his kelpies are a great idea, and look pretty creepy. There are some really nice ideas, such as using dwarf weapons for the fimm. When I saw that my thoughts were 'Dwarf axes, they look pretty Celtic. Damn it, why didn't I think of that?'

As Fimm is a propmaker, one expects big things for this army.  On a side note, his desert terrain boards look bloody fantastic.

It's great for my own fimir project to come across these other takes on the cyclopean bog-lovers. As the fimir are not that well represented, it's easy to get stuck with the look of the existing models as you don't have many other gamers armies to bounce off of and take ideas from. Finding those brave few who are doing cool things with the fimir gives me some fresh ideas to stea...ah, I mean be inspired by. Thanks to all, keep at it folk!
Posted by Mr Saturday at 9:12 AM 4 comments:

Fimir - Other Clans, Other Fans

Most recently I've been trudging toward the end of assembling my first twenty man unit of fimm warriors. This unit contains mostly converted savage orcs from the new plastic set, a smattering of Bloodmoon minis bog raiders, and a single Heroquest fimir for completeness. There is a four man filler in there too, which has taken on a life of it's own and is now fairly complex in itself. Mostly though, it's comprised of the savage orcs. These fellows have had a tail added, their necks sawed and shaved away and new heads sculpted for them, sometimes I go nuts and add a helm, hood or mask, belly shield, severed head and so on. It's a fair dose of work but watching the unit come together is VERY satisfying. I am now in danger of going completely nuts though.

Looking over what I have assembled, I have:

Most of these are a little further along than in the pictures shown. For the 2000pt target, I need:

Not doing so bad so, but this doesn't count actually painted the feckers. I have almost everything I need, bar three horsemen and some movement trays and bases. Thanks Gods for Base-X-of War. I have plans for the next 500pts consisting of ideas for bile worm mounted fimir heroes, hag worms as dragon ogres, fen beasts as trolls, Albion tribesmen as marauders, Balor of the evil eye as a daemon prince and warp-spasmed fianna fimm as spawn.

So a ways to go yet. This does tend to make one go a little insane as one sculpts the teeth onto another fimm. So, for a little perspective I plunged into the internets to see if there were any other lost souls who had attempted to build their own fimir clan. There were a few notables, and this leads me on to part two of this post, the others. If any of you object to me using your images, let me know.

There are a fair amount of fimir out there in folks collections, but very few armies. Two of the best I've seen are from Dreadaxe and Angry Lawyer. Dreadaxe has mostly used the Heroquest fimir. These lads are made from an incredibly hard plastic, so I can only imagine how crazy converting them all must have been. There are some great conversion in there too, and I have to say a completely ass-kicking display board, the idea for which I will rob remorselessly when the time comes to do mine. The sheer effort required in building a fimir army is enough to make the mind boil, but as you can see the finished article is well worth it.

Angry Lawyer's fimir are a little different. While there are a fair amount of the Heroquest fimir in there too, he had had a go at doing shearl and a giant fimir (daemon-maniac?) as well as a good sprinkling of Nick Bibby's ogre sized fimir. Another labour of love, where almost every figure requires a fair bit of attention. The great thing about building an army like this is you can go pretty crazy with the converting once you've settled on an army list that's going to foster your cyclopean fen-dwellers. 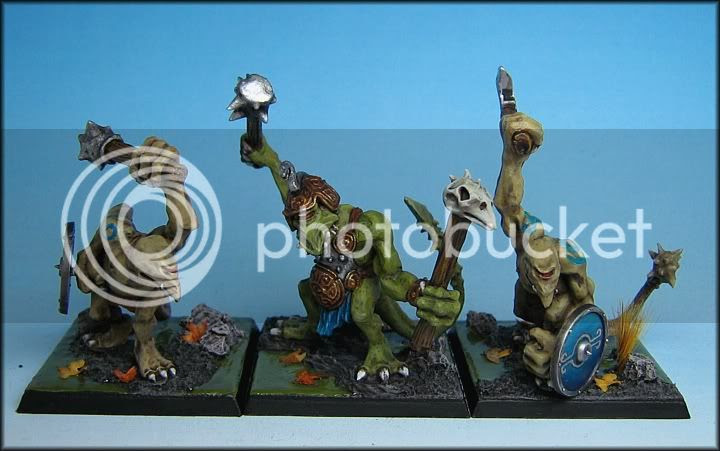 There area also some noteable units and single figures that I've seen. Bruenor's large fimir unit is a really splendid job, I like the addition of the shields. The skin tone is very pleasing too. I had a time considering the skin tone for my own fimir, and decided on a medium flesh tone, but these fellows would have been my choice had I seen them before I committed.

Hadriel Caine  of Tom's Boring Mordheim Forum (It's not boring) is building a fimir warband using bog raiders from Bloodmoon miniatures. He's made great use of the multi-part figures to do an array of hand and weapon swaps. Nice!

Most recently I was contacted by Steve Mack, who gave me a look at his heavily converted fimir noble and standard bearer, which are both looking fantastic. They are again, converted from the Nick Bibby sculpts (it's not like there's much choice for fimir) but have a plethora of pieces from various models in there. My favourite bits are the large shield from the dwarf lord, the pistol and the earring as part of the standard! Great work, I hope to see more from Steve. 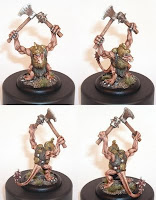 So, after having a look at what others were up to, I'm ready to take a deep breath and plunge back into the fimir project. I will probably paint the first fimm unit as a way of taking a break from assembly and sculpting for a while. Look for an update soon! Here are some other pics whose authors I can't recall, but are really rather groovy.

These just broke on the GarageHammer facebook page. It looks like ogres are in for some serious love and attention. Beautiful stuff! 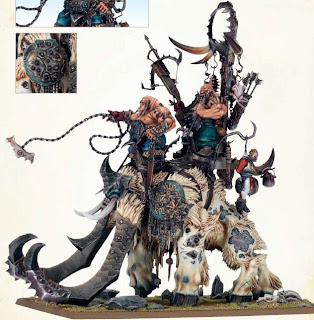 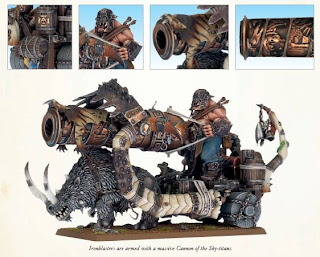 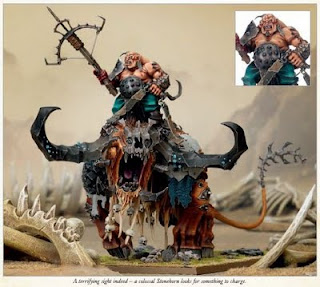