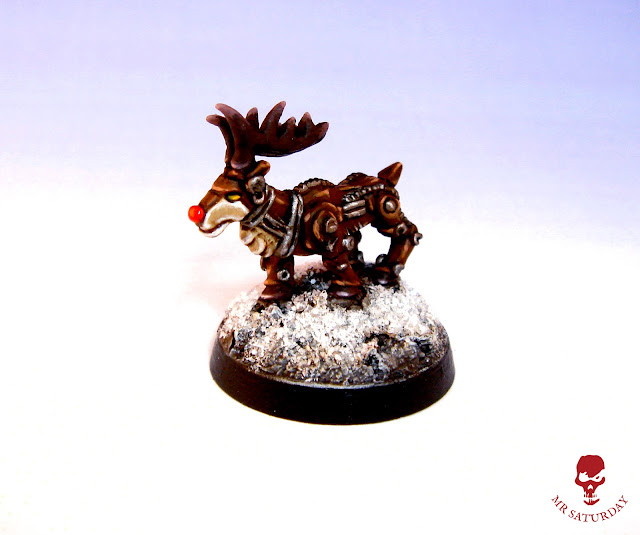 It's Festive mini time on the the Mumblings! Last year I painted the venerable Chaos Santa, and so this year I thought I'd continue the tradition and paint a companion for him. I'm not sure where this little fellow came from, I have a faint recollection he was a gift from some kind soul. In any case, he made for a fine buddy for big crazy Santa.

He painted up ludicrously quickly. With all the nuts, bolts and cables he painted himself really, allowing me to concentrate on making that nose super shiny.

I had a wee package of Xmas goodies arrive from the Twisted Christmas Kickstarter last week as well as an undead Santa from Foundry, so I have plenty of options for adding some more goons to the gang next year, maybe even the mighty Krampus himself.

Merry Christmas from the Mumblings!

Posted by Mr Saturday at 9:13 PM No comments: 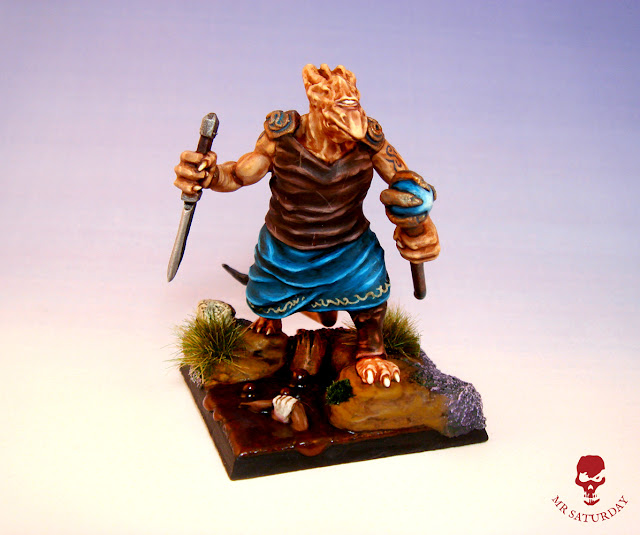 What's this? It's been a while since the one-eyed fellows have stopped into the Mumblings. I have a few on the painting table at the moment, this being the first fellow I've completed. It's nice to be adding a few new models to the army.

This is Conand, a Fomorian from Krakon Games' latest kickstarter, Creatures of the Night: Wrath of Cichol. Ross was kind enough to send me an early copy of Conand to paint, knowing my deep interest in cyclopean bog dwellers. Conand is only one of a range of Celtic-inspired monsters that Krakon plan on releasing off the back of this and subsequent kickstarters. You can check Krakon out here.

He's a multi-part resin model with separate arms and tail. I based him on a 40mm square scenic base as he is of the larger variety of... Fomorians. It felt  little odd using a square base I must admit, but all my fimir are based on squares, so that's that. 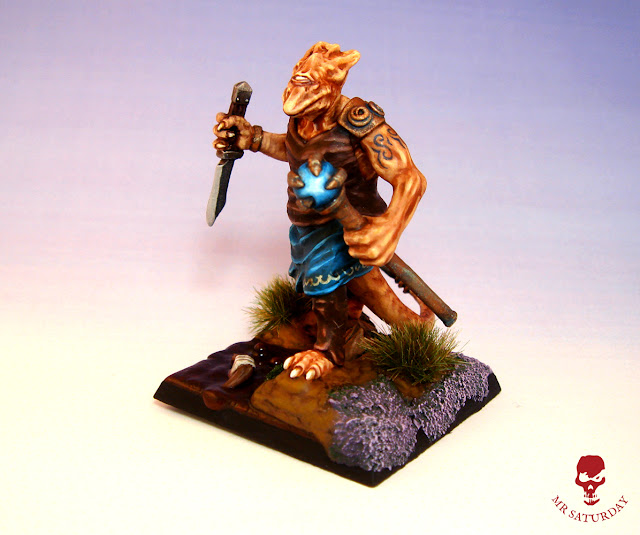 He was great fun to paint. I gave Conand my standard fimir colour scheme, adding a little freehand in the form of tattoos and embroidery on the hem of his kilt to match my existing characters. He doesn't have too much intricate detail either, though getting in under his tail took a little bendy brushwork. I gave him a leather shirt and greaves as he looks like he likes to get in there and use that dagger.

I adjusted my skin recipe slightly, adding a little more elf flesh to the highest highlights before glazing with sepia. I'm down to the dregs in my pot of Gryphonne Sepia, so I'll have to upgrade to the new wash shortly. 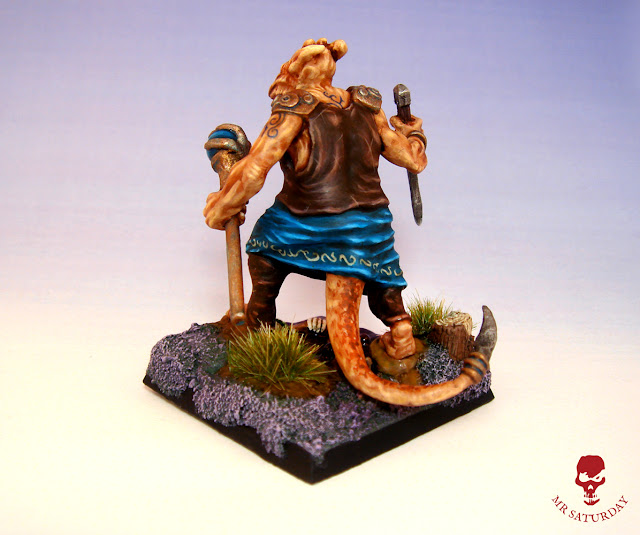 Now, I'll be using Conand as a dirach in my Fir Domhan army. His story is thus:

Dirach - Fedelmid
Fedelmid is a stoic young dirach. He serves Solkan, the God of Law, with utmost devotion. He is a Brithem, or judge, and is the supreme arbitrator of the law among the Fir Domhan, bar Morgayne herself. It is Fedelmid's duty to enact the will of Solkan without fear or favour, and he has been gifted with absolute impartiality by his patron.

Morgayne also employs Fedelmid as an assassin of some skill. His magical powers allow him to pass unheard and unseen, no small feat for a dirach of the Fianna. His skills with a blade mean no enemy of the fimir is safe once they have been condemned by the council and thereby by Solkan himself. There have been many and more slights to the Fir Domhan settled through the judicious use of Fedelmid's sacrificial dagger.
Posted by Mr Saturday at 7:26 PM 6 comments:

Over the last while I've been secretly beavering away on a project for Macrocosm, doing things like that there logo above. It's a game with a theme dear to my heart in fact, with both factions being undead. That's right, everyone in the Bonefields box is dead. Well, bar the dwarf necromancer, but necromancers are a hazy one. Alive? Dead? Or just badly in need of a bath?

Anyhow, Macrocosm are bringing Bonefields to kickstarter in early 2018. The set will contain two full warbands, and will be a skirmish style game (with Mr Jake Thornton offering some tips and looking over Chris's rule-set) where undead dwarves and goblins attempt to continue their bitter feuding well after they have all died. That's stubborn for you. There's a goblin vampire too, it's sweet. In fact, there are a load of units for both factions in the works. Skeletal wolf riders? Yep. Bony ponies? Indeed. Dwarf wights? Aye. It goes on kids. Alessio Cisbani and Darren Edwards, the sculptors on the project, have many treats in store. There are over sixty sculpts in the works, including more infantry, cavalry and even artillery. Paul Naylor (former Golden Demon winner) is also working on Bonefields scenery. I do hear that rules for Macrocosm's pretty huge fantasy range will be forthcoming for Bonefields also.

I was fortunate to have been sent some of the miniatures from the starter set for a little brush tickling.

The minis are pretty characterful and paint up very easily. Getting a warband together for this game will take most folks very little time, and of course, easily slot into a pile of other games. My favourite minis so far are probably these lads:

You'd think I'd be all about the gobbos, but I like the idea of dwarven wights. Mind you, when the heavy goblin infantry and wolf riders hit I may change my mind.

I've also been working on some bases for Bonefields, which will be a set of resin bases and look very much like the ones above. It'll be pretty cool to see my bases in production. Now you can all have a little Saturday in your life. There are a lot of other goodies in the works for Bonefields, but right now that's yer lot. I'll dispense more news as it's released from Chris' vault of secrets.