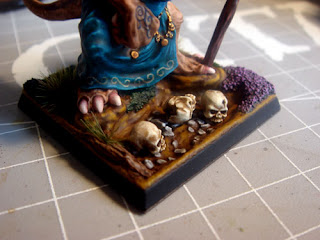 Almost there. The meargh is pretty much finished, the only thing missing being the water effects which will be added to the two pools on her base, so these skulls will be half submerged. I'm pretty happy with how she turned out, she looks high-ranking, but still fits in with the fimm as her robes looks worn and the tone is quite subdued for a blue garment. Being the clan leader, this is about a fancy as fimir get, so I'll have a good reference now when doing nobles, dirachs and other higher-ranking fimir.

The bog water will have to wait until after the weekend though, as she is destined to lead the clan into their first tournament. I'll also need to make her a floating rock altar on a 50mmx50mm base, which she can magnetise onto if I want to give her a mount. Then I might have a stab at painting either the half-dead or Crom...
Posted by Mr Saturday at 2:27 PM 5 comments:

Today on the blogoverse I came across this little nugget. Warploque miniatures are threatening to produce a set of pseudo Napoleonic/Fantasy regiment, the Albionnican 27th foot. I'm a total sucker for unusual miniature sets, and it takes my mind off backing the Reaper kickstarter (thankfully finished now, I almost hit that pledge button a few times) or buying the 40k Dark Vengeance set. I don't even play 40k, what the hell is wrong with me? They put in a limited edition plastic figure and I'm all a quiver.

I was, and am, a big fan of the fantasy Napoleonic era game, Flintloque. There's nothing out there quite like it, and I loved the chunky but utterly enthralling figures for the game, the Witchlands forces in particular. These figures seem very close to being useable in the game, though the 'English' forces in the game were orcs, as I recall.

I like Warploque's stuff, the zombie pirates in particular are wonderful. These lads look good, thought the mix of medieval and Napoleonic era gear is slightly grating, and it's hard to make out some of the detail as these appear to be masters, but I love them all the same. I wish they all had rifles rather than crossbows though.

This set is only going to be cast if Warploque get 15 orders. Seems a small ask, but at the time of writing only one set has been sold, so if you like em', order by the 10th of September.
Posted by Mr Saturday at 9:02 PM 2 comments:

Email ThisBlogThis!Share to TwitterShare to FacebookShare to Pinterest
Labels: Review 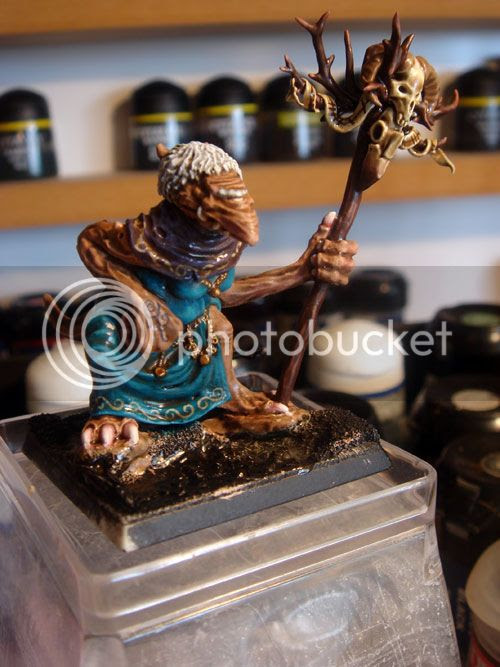 I'm about half way through painting the meargh, and enjoying it immensely, though the slight pressure of having to have her done this day next week is lighting a fire under my rear to say the least. I won't get the water effects done in time, but apart from that she should be ready to rock.

I essentially want her to look like a mean old fimir granny.

No part of her you see here is entirely done, though the hair, staff and skin are almost there. The robe is difficult, I want it to look pretty worn and a bit grimy without just looking just plain old rubbish. The cowl will be as much of a pain too, I'll warrant. The pool in front of her will have three skulls half submerged in bog water, I'm really looking forward to this bit. I love doing the swampy bases. Also, after  a bit of mulling, I think I'll add a little ivy to the staff, not much, just a few strands of Army Painter's poison ivy.

Once she's done, I'll be doing a 50mm base with a floating rock platform for her to float about on, trailing weed and gunk as if she just willed it up out of the swamp. The altar of Fimul (war-shrine) model might go the same way, either that or a fen-beast style conversion thingamy.
Posted by Mr Saturday at 4:49 PM 5 comments: 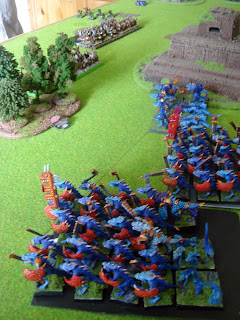 Last weekend two long time pals of mine called down for a few practice games for the upcoming NWG tournament in Wicklow. I needed this badly, as I've played not a single game with the warriors of chaos list, the list I am using for my fimir clan. In fact, I've not played warriors in at least two editions. I was to learn some things. Painful things.

After many years playing pretty much only my beloved vampire counts, I've embraces both the sons of Hashut and the fimir in the last while. The fimir in particular are a project I had been mulling over a long time. However, with this change I now have to consider things like panic, break tests, battle standard bearers and all the other paraphernalia of living troops. It's like a new game. And what better way to ease into a new army than bring it to a competitive tournament against folks who live only to drink the tears of their broken and weeping foes. (Not at all lads, yer all lovely, but the tears thing I stand behind.) In at the deep end, I guess. With all this in mind, I thought I better at least know the rules for my own army so as not to take even longer to complete a turn. I believe my surname has even become synonymous in certain circles with taking an age to take your turn. 'Come on mate, you're Staffording the hell out of this magic phase.'

So we set to it. I played against John's lizards and Craig of Blog of Grudges fame and his dwarves. Against Craig, I learned to mind my meargh (sorcerer Lord on disc) from getting cannoned off in turn 1. This is an elementary lesson I apparently needed to re-learn. I also developed a deep affection for the Infernal Gateway spell. My fimm (warriors with halberds and mark of Tzeentch) are super resilient, taking a rear charge from a block of thirty miners and not only surviving the impact, but turning about and pounding the little fellows back into the ground. Ultimately though, the anvil Craig was packing allowed some dwarf units to pull off some sneaky charges, and though it was close,  Craig did me in 14-6.

John's lizards taught me other things, things like don't get suckered into charging a unit that won't break, thereby pulling it out of the battle line and subsequently getting mullered by 3 counter charges. Chosen are good (my half-dead, bog mummies, essentially) but not that good. The Tuatha Taiden (marauders with mark of Khorne and great weapons ) did very well, holding the line against all, due in great part to the chieftain (exalted hero with sword of anti-heroes & other trickster's shard) who killed the lizard general, battle standard and a stegadon single-handedly, and he didn't think it too many. Poor deployment on my part, plus a general lack of experience cost me, but John's dice mocked him relentlessly, almost resulting in him losing his last Kroxigor and ancient stegadon to an overrun directly under his own Comet of Casandora spell. It would have been very funny indeed had they died as it ploughed down directly on top of them. In the end, a draw, which got pulled to an 11-9 to John due to my SCALE 1 list.

I'm enjoying the fimir, it's a new play style, and I'm having a blast putting the army together. The meargh is half done. I now have two weeks to finish her, which for me is cutting it close. 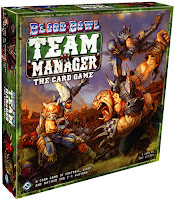 After the warhammer we gave Blood Bowl - Team Manager a go, and I have to say, all the positive reviews were bang on the money. What a great game. It is reminiscent enough of the actual game to seem familiar, but has plenty of it's own pleasant quirky rules. At this stage however, we were into our second bottle of gin, so my review is tainted somewhat by severe inebriation. And boy, how I paid for it the next day. Gin is the tipple of the devil himself, there can be no doubt.

So, after a most pleasant couple of days gaming I can safely say I am totally unprepared for the unlawful pounding I will receive at NWG.

On a side note, it seems I suck all the ass at Blood Bowl online. All of it. After another 4-0 defeat tonight I think I need to reconsider my future playing this game. How terrible to love a game and be truly awful at playing it.
Posted by Mr Saturday at 11:39 PM 4 comments:

Well, it's ETC time again, already. The best of luck to the Irish Team in Poland. Give em' hell lads, bring back a few bloody heads for the trophy racks.
Posted by Mr Saturday at 4:52 PM No comments: 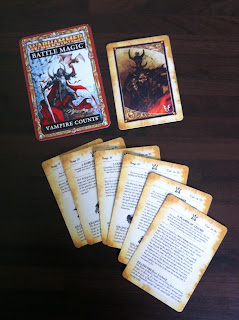 Recently of Chaos Dwarves Online I came across this thread, a fan-made set of Lore of Hashut cards. There was also a recommendation for artscow.com, who did a grand job printing them! you can see the size comparison with regular lore cards above. Finally, no more rifling through Tamurkhan every time I cast a spell!
Posted by Mr Saturday at 2:04 PM 3 comments:


There's been a bit of a furore about this list over at Warseer. It's a huge release schedule for the Hobbit, but more interestingly, 40k. I've been hovering on the edge of looking to start a force, but these two little entries in the list would push me over the edge if true:

I'm guessing an Imperial guard upgrade sprue and a sinister patriarch, but it could be chaos cultists and some other bloke called Dumas, and not in fact the shadowy father of a subversive and cancerous secret alien cult. And yet...

Please let it be so. I'm sceptical, but I want to be a believer.
Posted by Mr Saturday at 6:55 PM 3 comments:

My Mantic pledge goodies arrived today, the hardback rules, small rulebook and dice. A nice haul. I've only thumbed through the rules, but it's very nice quality, plenty of photos of miniatures of armies clashing and such, and lots of illustrations. A beefy background section, and the rules look great fun. I'm looking forward to reading it in more depth, maybe on the holidays...
Posted by Mr Saturday at 9:50 PM 3 comments: