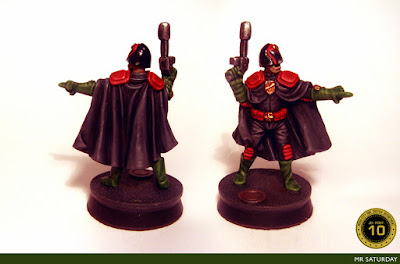 Senior Judge Gogol is my latest submission for Judgement Day. He gives my merry band of invaders a leader to order them about. Gogol is actually named for a character featured during the Apocalypse War series in 2000AD, albeit one with a very brief appearance. Gogol barely managed a stroll around the grand hall of justice before Dredd gunned him down and impersonated him in order to assassinate the brainwashed chief judge Griffin.

I think Gogol deserves some fun on the tabletop to make up for getting done in by Dredd. He's already been at work ordering his judges into the fray. More on that shortly, and you can also head over to Sho3box to hear the coverage from the Imperialist Western perspective.

As always, next week it's over to Cheetor for more Judge Dredd miniature fun.
Posted by Mr Saturday at 1:05 AM 4 comments: 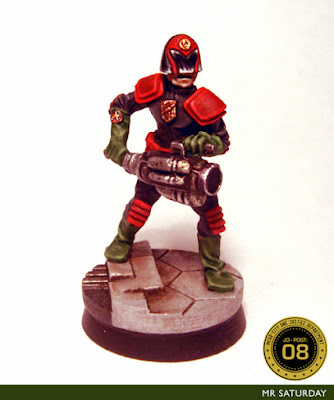 Phew. With literally minutes to spare, Judge Borzilov is completed. This flame-throwing nutter fell due on a week replete with heavy work and family commitments, with a trip to A&E thrown in for good measure. (Not to worry, all is well.) Regardless, Judge Borzilov steps forth ready to incinerate those who dare oppose the Dictatorat.

I like this sculpt. He carries the oddest looking flamethower I've ever seen. Those gloves of his must be pretty well insulated. It looks very Carlos Ezquerra, organic and no straight lines anywhere, but to my knowledge he never drew one for the Apocalypse War series. I wanted to give the hint that it gets a lot of use, so I gave it some heat damage with sepia, purple and finally blue washes the closer to the end of the barrel I got. I highlighted the very edge with silver to show where it has burned clean. 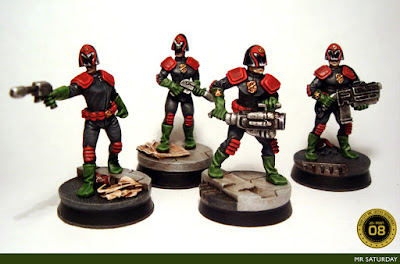 I adjusted his legs to suit the base and give him a tad more movement. Paul had a fine idea for an addition to the bases that fits perfectly with the Apocalypse War, but that'll have to wait for a future mini.

This brings my tally to four Sov judges. Time for some leadership methinks. Next week it's back to the Sho3box for more Dredd fun.
Posted by Mr Saturday at 1:22 AM 4 comments:

This week sees another Sov join the fray. Judge Alexandrov is bringing a little heat to the party. Armed with a large carbine, this judge is the first specialist to join my little invasion force. My Judgement Day posts are quite Sov-centric at the moment, soon there will be enough for a playable force. Then the invasion fun can really begin.

I added a little more to the base this time. In the back you can see a smashed Mega City One judge's helmet, no doubt blasted off it's former owner by high calibre shells meted out by Alexandrov here. I've plans for adding a few more Dredd-themed basing bits to some of the other Sov models, especially on the larger bases.

There are a lot of nicely themed forces playable for the Apocalypse War as well as judges. Citi-Def units and Apocalypse War resistance units are both appealing, with a nice urban camo scheme perhaps, though the khaki and black sometimes worn by American riot police is pretty good too.

Next week it's back over the the Sho3box for more Dredd-flavoured fun.
Posted by Mr Saturday at 12:00 AM 5 comments: