After a hideously long time on my painting desk, the next hybrid is done. A meltagun toting 2nd generation, or brother Char to his fellows. The base model is a Mantic Games Plague model from Deadzone. I added a masked head to give him a little adeptus mechanicus feel. The gun arm took some work, a I had to change the position to lower the weapon so I could add the strap to give it some weight. A little greenstuff, an extra arm and some talos bits for stim injectors and there he is.
Posted by Mr Saturday at 9:30 PM 6 comments: 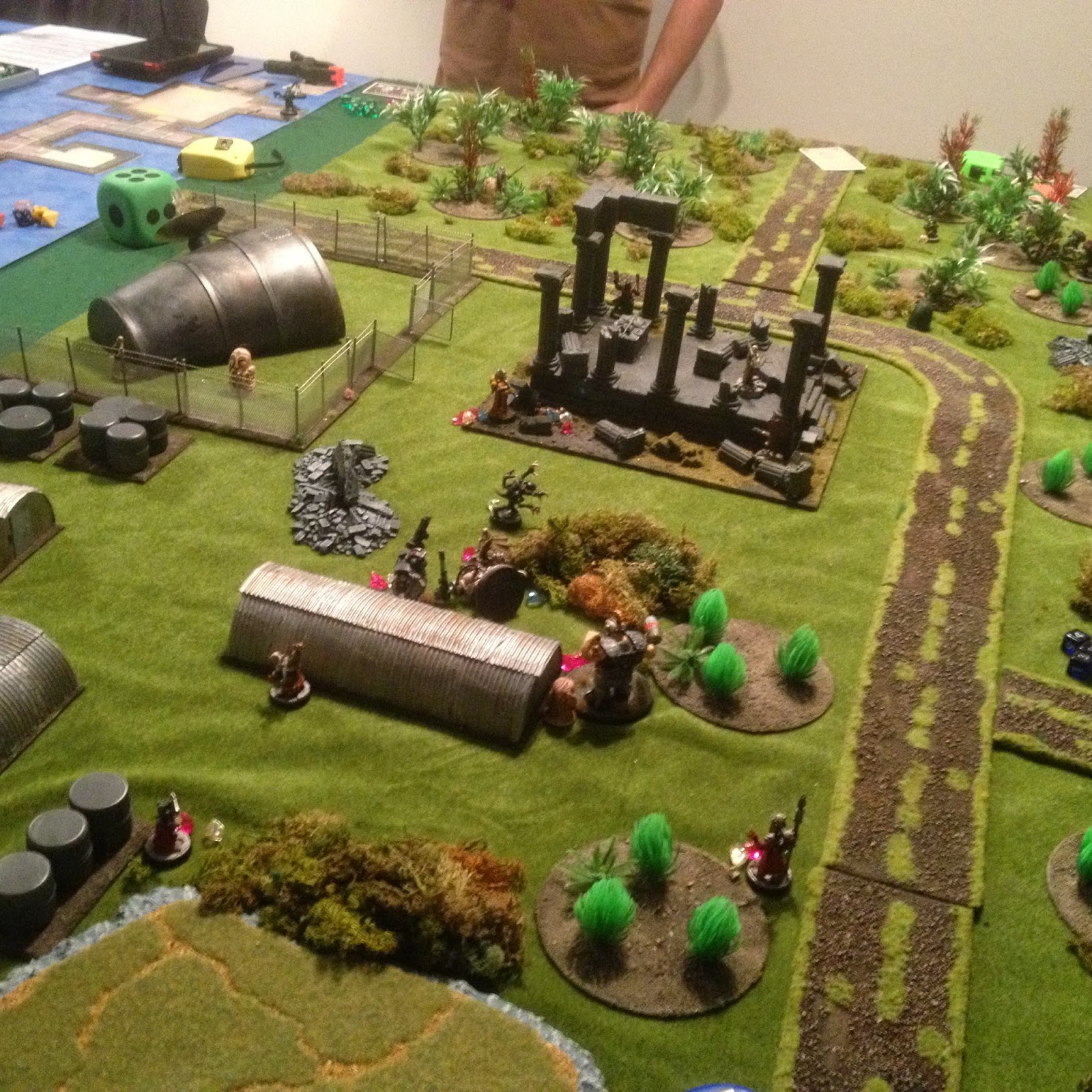 Last weekend we kicked off the gaming for 2015 with a large Pulp Alley game hosted by John of JustJohn fame. Saturday morning (late morning, we just can't seem to stop talking little men over pot after pot of coffee) we adjourned to John's hobby building (shed doesn't really cover it) and his enormous wargaming table.

The game was Pulp Alley, and the scenario was uncover several minor plot points hidden around the table to find out the whereabouts of the captive held by the sinister cult. The players were as follows:

A loose alliance gathered to find the captive, all with agendas of their own:
Bruce - An inquisitor and his retinue of Imperial followers.
Paul(Cheetor)- Heisenbork brainboy and his band of greenskins. Big Billy was my favourite here.
Sean - A unit of Imperial Ogryns, led by Beefpounder, the biggest Ogryn I've ever encountered.

This very loose alliance was set against the cult, represented by:

Craig - A gang of trench-coat wearing toughs led by Salty Tom.
Dave  - My own league was a group of nasty genestealer hybrids, led by magos (not magus, you'll note) Kurgan.

So, essentially the Imperial/Ork alliance had to find the clues to the whereabouts of the captive, and the cult had to keep them guessing.

As you can see, Sean, who was the only Imperial player on his side of the board wasting no time in ploughing right into the cult magos. Magos Kurgan has an unlucky reputation, ans spent several turns fending off the unstoppable Beefpounder before help arrived in the shape of brother Welt, a grossly misshapen and augmented hybrid. With the cult in furious battle with the ogryns, the initiative stayed at this end of the table for several turns, denying the orks and inquisitor the chance to make an impact in the early game. Judicious use of cards meant that the orgyns put up one hell of a fight though, with lead and steel bouncing off them to no effect. (It seems tremendously easy to build characters in Pulp Alley to reflect any type of ability. Such as Beefpounder's ability to just not die.)

Eventually the initiate shifted, and shots began to ring out from the advancing Imperials and Orks. Notably from Bruce's sniper, who cleared an area very swiftly as dodging cultists dove and rolled behind whatever cover was available. Craig rolled some truly astounding dodge rolls.

Eventually though, as plot points were uncovered, a second underground entrance was discovered. The main entrance being in the ruins of the Imperial shrine in the centre of the table. Bruce's inquisitor and his fellows raced for the shrine, with his commissar and adeptus arbite vaulting up the outer wall and onto into the ruins.

Well, that's what statistically would have happened. Instead, both managed to fluff several peril rolls and sprain their ankles, taking them out of the game. Hilarity ensued, with the mental image of two Imperial hardcases rolled up in a ball grabbing their ankles and hissing 'Fffffffff, oOooOoooo that's sore!'

After the mockery abated, it was noticed the orks were making for the rather lonely looking outdoor toilet at the far end of the table after completely abandoning the fragile alliance with the Imperials. The second entrance had been found. They were now only a flush away from certain victory.

At the other end of the table magos Kurgan eventually managed to extricated himself from combat, with Beefpounder's attention diverted by brother Welt. The ogres had soaked up an enormous amount of punishment, but eventually the cultists managed to access the entrance to the catacombs in the shrine and head off the orks before they managed to rescue the captive. After some vicious tunnel fighting the cult came out on top, though there are rumours of a steward's inquiry. All in all a great game, which fairly effortlessly accommodated several players. This only serves to further cements my affection for the Pulp Alley rules.

Next up was an introductory game of Bolt Action using our Rogue Trader models. Bruce gave us the skinny on the game, which was a lot of fun. I do like the dice system, and it seems as if the rules can be massaged enough to suit the 40k universe. I've seen a game using German Walkers and zombies, which ticks my weird war box something fierce, so I'm interested in more Bolt Action.

To finish off a very fine weekend of gaming, Sunday morning saw John crack out Dungeonquest. Insanely difficult, but loads of fun. I must get me a set.