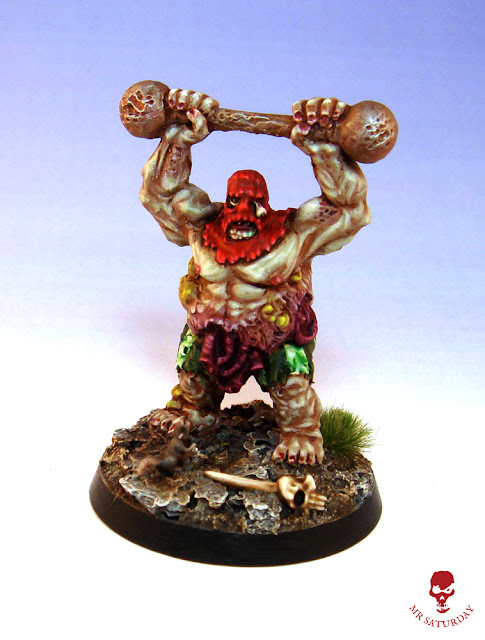 This handsome fellow is Mungo Silenbritches from the Circus of Corruption Kickstarter from Old School Miniatures. I was fortunate enough to snag a preview copy of Mungo and get him painted up just in time to not help the Kickstarter in any way at all. (It finished up a couple of days ago.) You CAN still order the Circus from the website at KS prices though, here's the link. My fellow Scale Creeps, those faster and more diligent with the brush than I posted a selection of Circus of Corruption miniatures last week, you can check these delights out here.

Mungo is probably my favourite mini from the set thus far. He's one of a pair of strongmen. There are many circus favourites in the range from acrobats to stilt walkers (if they are stilts).

I had a great old time painting Mungo's pasty rancid flesh, boils and guts. He's so damn fun. I added a couple of wee rats to his base, hoping for a tasty bit to drop off. That's one hell of a hernia he's got. Just goes to show, make sure you know what you're doing with those weights. 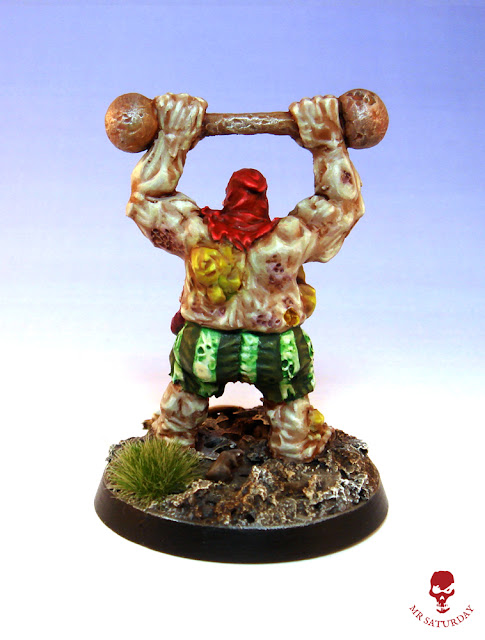 I have another pair of Circus members on the painting table, a tumbler and a puppeteer. It would be very easy to keep going, these are very fun minis. I'll have to wait until the rest of the kickstarter arrives though.

I hear there's even an elephant.
Posted by Mr Saturday at 11:45 PM 6 comments: 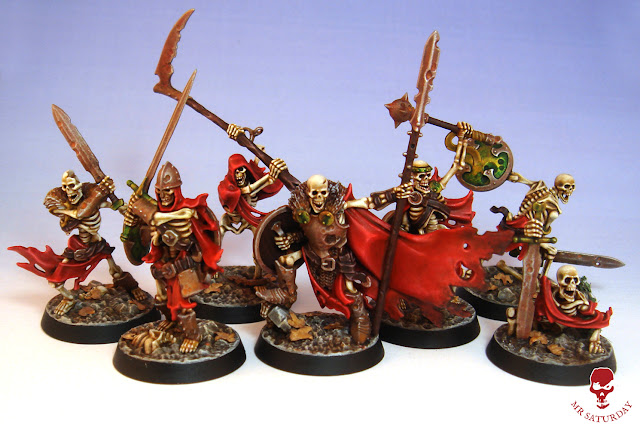 These lads were supposed to be deep in the heart of battle at this moment, but life sometimes makes plans without consulting us, so instead I found myself with the time to take some photos of my finished Sepulchral Guard. The last three I painted were the Warden, Champion and Prince of Dust. 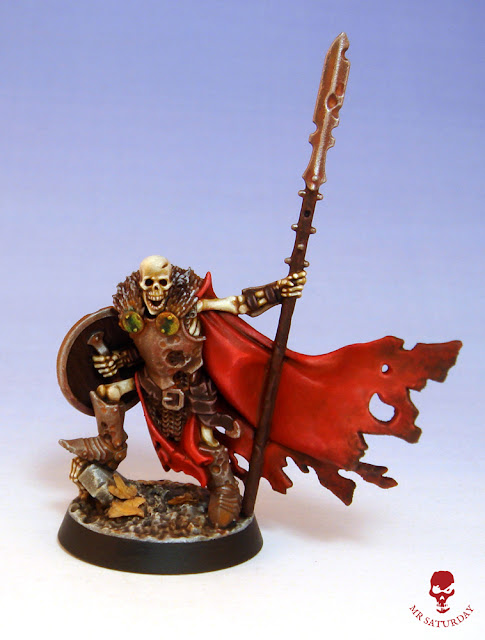 The Warden is a cool looking skeleton. I love his pose, the armoured boots, the fur, the shield, all suitably epic. That cloak in particular is mightily heroic. I painted him in two parts so I could get at his armour, shield and cloak. There was no way I could have levered my brush into some of those crannies without severe mental damage. As a grognard, I was not raised with all these holes in cloaks and super dynamic poses. My undead had to rank up, by Nagash!

I'm not really a fan of assembly after painting, it's always a risk. This time though, he went together just dandy. Look at that cloak though, what a sculpt. 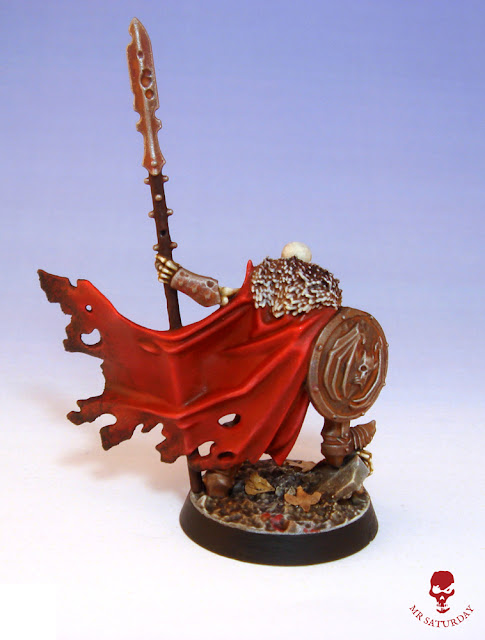 The second of these final three was the Prince of Dust. Less detailed than the Warden, the Prince is still a great mini. The slightly askew jaswbone is a nice touch, it makes him look like a bit of a madman. I reckon he's the skeleton that charges in with the high pitched scream, Harryhausen style. This guy was also painted in two parts so I could get at his shield and cloak. 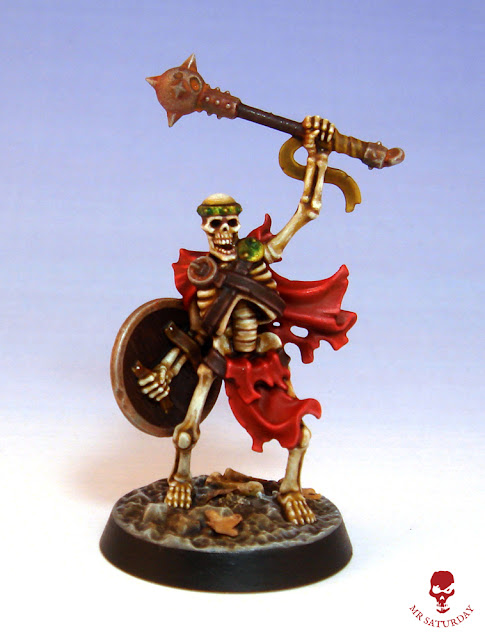 The final of the three is the Champion. The goth of the group. He's got that art nouveau thing going on with the pointed helm, tall elegant broadsword and flowing cloth. He was also painted in two parts, and was a true bastard to put together after. 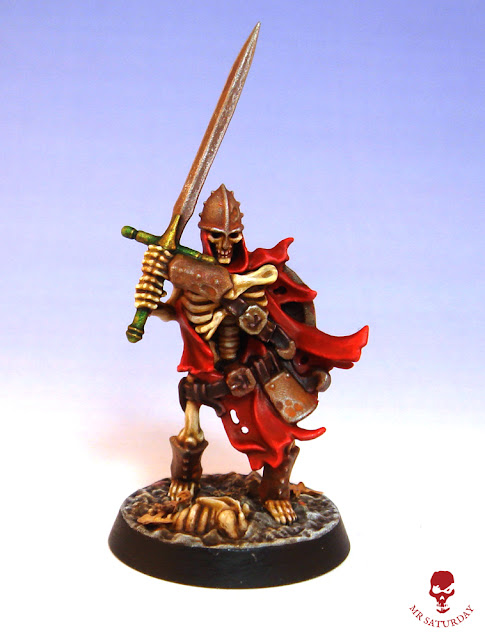 You know, I've been at this miniature painting lark for a long time. Over thirty years. I like to think I'm a bit of a veteran. I know a few things. Like how to dry fit parts, I know how to do that. I shaved the plug on this guy before I started painting so that it would fit nice and easy after I'd finished painting both parts. Did it? No. It did not. It did not.

So, with the plug half way in I think 'I'll pull it out, shave it some more and go again.' Nope. No budging. I did scrape the paintwork trying too. The only thing for it was to push it and hope it moved far enough. By the grace of the Gods, it did. Not perfectly though, it left a gap of two or so millimetres where the hand joins the wrist. Some glue (glue on painted parts, good Christ) and I held that sucker tight for about five minutes. More paint damage. With the parts finally together I repaired the damage to the paint and hit him with a fresh coat of varnish. A close call. 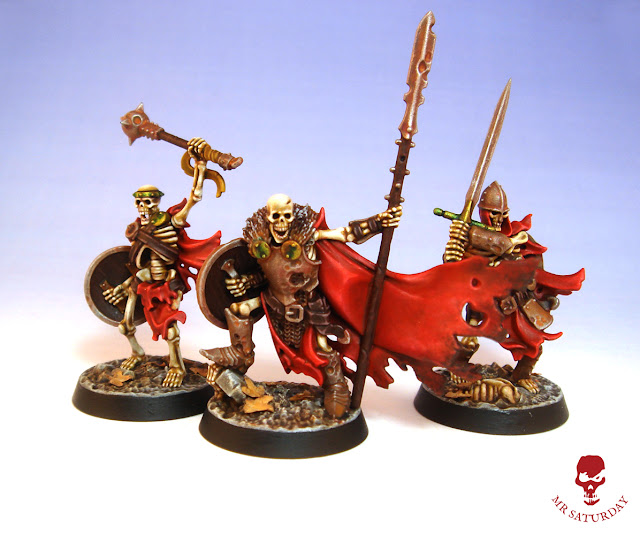 With the Champion defeated that was the warband complete. I'm pretty happy to have a Shadespire warband ready to go, and I fancy doing another in the near future. Skaven perhaps, maybe even Stormcast. They're such great little painting projects. Before that though, I think I'll have a crack at some terrain for blocked hexes. I have lots of ruins and statuary that's crying out for use in something like Shadespire ruins.

Next up though, something from the circus.
Posted by Mr Saturday at 11:31 PM 24 comments: