This is my first army specifically for Dragon Rampant, the Shadow Empire of Lo Pan. He was a "shadow emperor" appointed by the First Emperor Qin Shi Huang. Lo Pan was put on the throne as an impersonator because the Emperor was afraid of being assassinated. However, Lo Pan tried to take over and was cursed by the Emperor to exist without flesh for 2,000 years until he could marry a girl with green eyes.

Lo Pan, of course, is most well known to me from the film 'Big Trouble in Little China', a magnificent pulp movie where Lo Pan attempts to finally escape his curse.

My take on this army is based on Lo Pan not long after he was cursed by the emperor, maybe a few hundred years. He commands a variety of Chinese horrors, first and foremost of which are the terracotta warriors, which he has been able to steal from the emperor's tomb by virtue of the fact that he did sit on the throne himself, if only as an impersonator.These clay warriors are supported by jade mummies, hopping vampires, guardians (the weird ball monster from the movie) and other nasties. I'm hoping to include a Xing Tian, a headless giant. Lo-Pan's unit will have the sorcerer himself as well as his hairy, bestial servant, some demons and a so on. The three storms will operate as a unit on their own. Eventually I will add a terracotta warrior bronze war chariot.


The Eternal Army of Qin Shi Huang - The Terracotta Warriors
LoPan has managed to purloin a portion of the first emperor's army from the Imperial tomb. Technically, he was emperor, even if only acting as a double. That sliver of authority allows him the right to command the clay warriors of the emperor's army.

Now hundreds of years old, the dusty, creaking clay soldiers obey without question. Only the officers leading the contingent have any real will of their own, but despite their resentment they are compelled by bonds of honour and the darkest magic to serve LoPan, and so lead they their warriors in the emperor's name under his tattered banners.

Each clay shell is animated by the soul of one of the emperor's soldiers killed in battle. They know neither fear nor pain and have lost none of the martial skill they had in life. Should the clay shell of one of the warriors be shattered it will gradually reform until the warrior can pick up his weapon and return to the fight once more. Only the emperor may release these souls from service, and he slumbers still.

There are several units of terracotta warriors in LoPan's army: 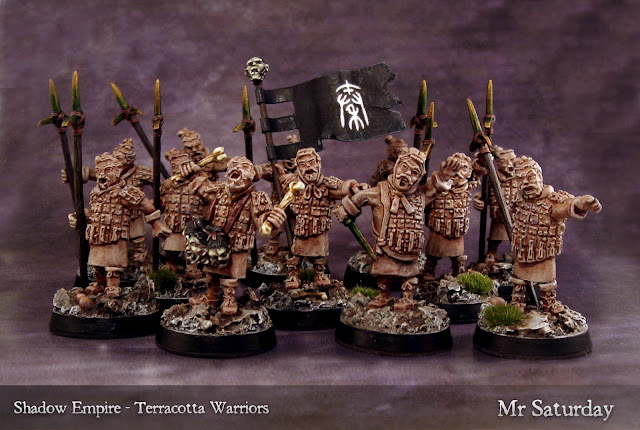 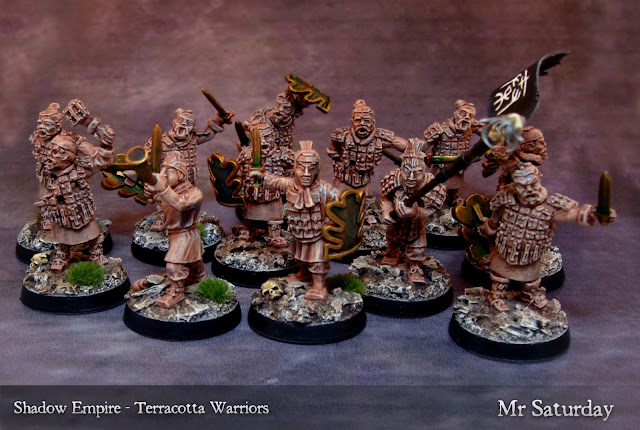 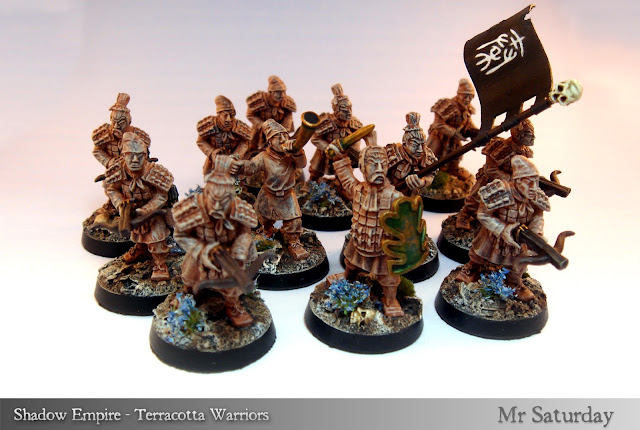 There are other terracotta regiments in LoPan's service, the terrible bronze cavalry and the thunderous war chariot. These will appear in time.


LoPan's retinue
LoPan has gathered a collection of personal followers that act as guides, bodyguards and enforcers that he is rarely seen without. He is a follower of Ching Dai, and his God has sent three of his Yaoguai (demons) to aid LoPan, and also to remind him he is never out of Ching Dai's reach. A wild Yeren accompanies the sorcerer as a bodyguard, and finally the most unusual companion, Liu Sheng, acts as a guide and conduit between the worlds. 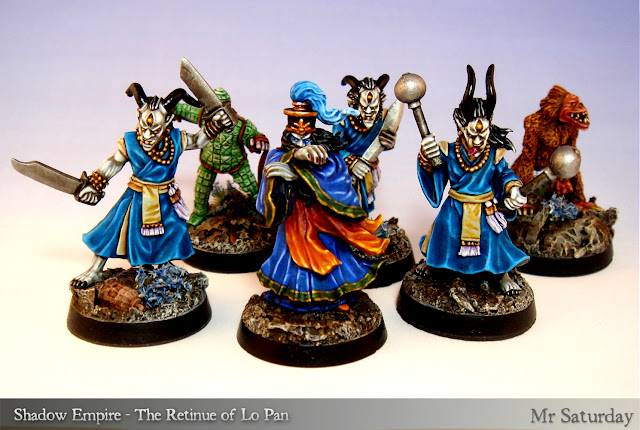 Liu Sheng - The Jade Prince
Buried with his wife Dou Wan one hundred years after the first Emperor was interred in his tomb, he was awoken by LoPan to find tomb robbers had stolen Dou Wan's body. They would have taken him too no doubt, but the thieves warding stone failed them, and one of Sheng's tomb guardians awoke in time to scare off the looters before they could ransack the tomb further.

Something of a hedonist in life, Sheng's focus was sharpened by undeath. His jade suit ensured he was not bound fully to LoPan's will, and so Sheng resolved to find his lost wife and restore her to her rightful resting place, a quest he pursues relentlessly when not attending his new master.

Liu Sheng sees the paths between the worlds and hears the whispers of the dead, a gift which LoPan prizes greatly. 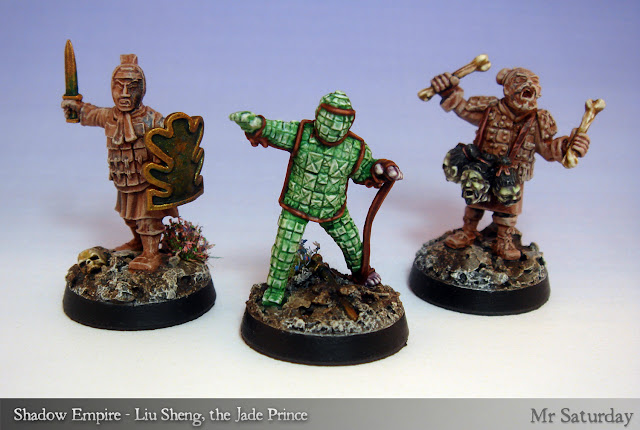 The Yeren
The creature know as the Yeren seems to be part beast, part demon. A ferocious monster, it is however utterly in thrall to LoPan, and acts as a loyal hound, constantly watchful for any threats to it's beloved master. It haunts the halls of it's masters home, carrying off any intruders it finds to it's dark, stinking den, there to be consumed at leisure. 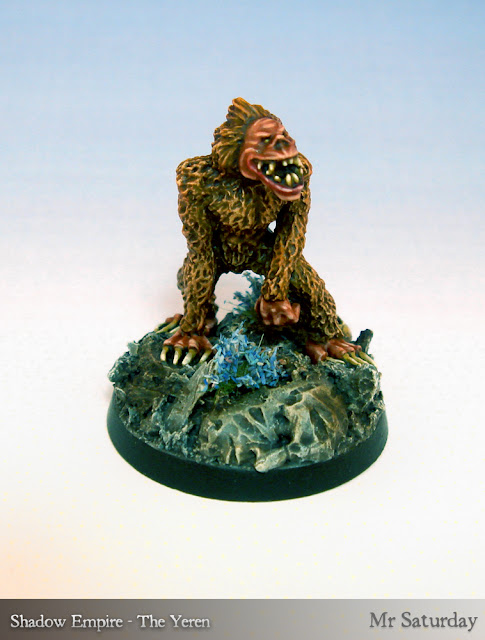 Guardians
What is sees, Lo Pan knows. - Egg Shen
In the movie, only a single lonely guardian watches Lo Pan's halls. I like to imagine at one point he had more of the revolting little monsters. The guardians are Lo Pans scouts and sentries. They patrol his lair, and when on campaign they watch for signs of the enemy. They leave no tracks and make no sound as they float unnaturally through the air, intent on spying on their master's enemies. 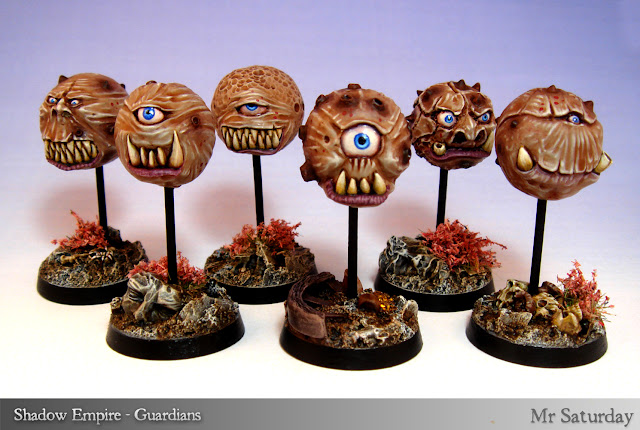 Emperor's Guard
An unusual addition, these were initially added to run Lo Pan's retinue in games of Dracula's America. I justify using them in Lo Pan's ancient Chinese army by saying he managed to locate and beak open an ancient alien tomb complex and unlock some of the secrets buried within. By combining this arcane technology with his own magic, the Emperor's guard came to be. (Quiet now, it totally works.) 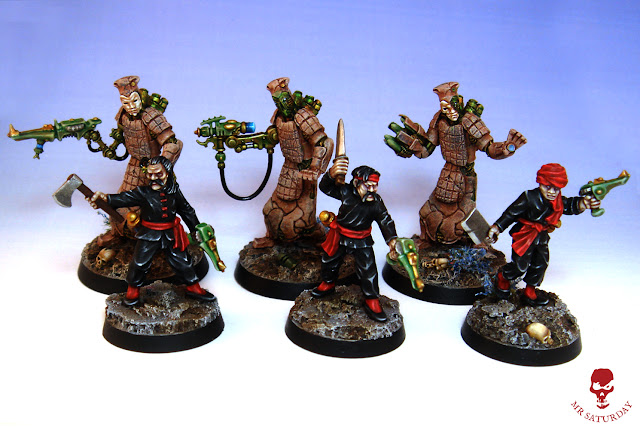 To Come
There are many other units to be added to the army once LoPan's unit is complete. The hopping vampires, terracotta warrior cavalry, the three storms and the mighty Xing Tian. Watch this space.