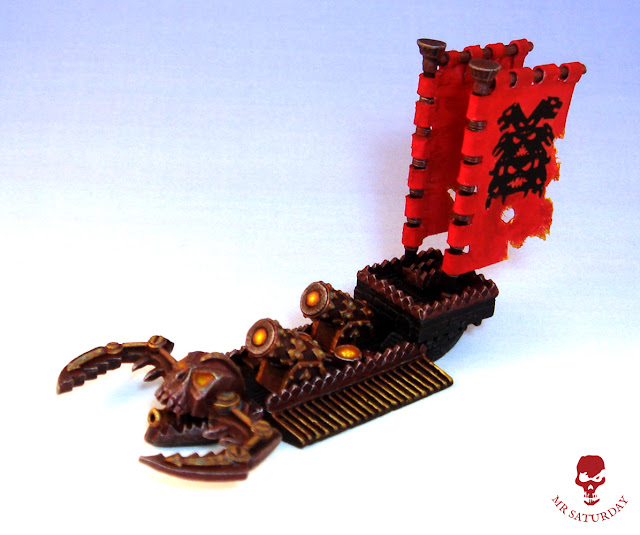 A Khorne Bloodship is a fearsome vessel to behold. It is a vast, towering war machine that grinds across the surface of the waves, its armoured prow snapping open and shut like some great beast's maw. The massed banks of its beaten bronze oars cut through the water at inhuman speed, and deep within its titanic hull great drums are beaten in incessant rhythms. As its jaw opens, whirling blades and pounding hammers spring forth, and great gouts of flame roar skywards.

The hull of a Bloodship bears the device of Khorne, the Blood God, on its bronze-plated hull. Ranks of Chaos Warriors cram the decks and boarding platforms, eager to rend the flesh of their enemies and bring skulls before their Lord. The coming of a Khorne Bloodship is a time of dread indeed.

The latest addition to my nascent Khorne fleet is my flagship, the HIM (His Infernal Majesty's) Guns of Anarchy. The Khorne is dialed up to eleven on this ship. Articulated skull faced prow for grabbing enemy ships, big flame cannons that fire napalm coated skulls and immense Khorne flags. Subtlety is an alien concept to Khorne.

I painted the bloodship in several sections. After reading up on some old pirate traditions I decided to give the Guns of Anarchy red banners rather than black. A red flag, or Bloody Red, as they were known, when flown by a pirate ship meant that their victims could expect no mercy. Not that you can expect any from a howling Khorne boarding party anyway, but making the right first impression is so important.

The banners are coloured card that I covered with some truly ancient transfers. A note to you all: be careful putting Daler Rowney matt varish on paper. I have noticed it can whiten in places when applied to paper. Such was the case with these flags, but nothing a little touch up couldn't fix.

The fleet is still tiny, numbering but four ships, but the chaos shipyards (imagine being the foreman there) are currently beavering away on a squadron of Ironsharks. If there's anything better than a big skull with clamping mandibles and a cannon mouth, it's a big iron shark head with snappy metal jaws.
Posted by Mr Saturday at 10:48 PM 8 comments: