Here you can gaze upon my progress with the Kabeiri, my slightly mechanicus flavoured genestealer cult.


It is M40.999 by Imperial reckoning, and world of Thelema in the Segmentum Obscurus is at war. After fifty years of conflict there is no respite to the fighting, and there is no end in sight. Both sides fight with righteous fury over the devastated remains of once mighty Imperial cities.

The Forge temple known as the Kabeiri had been strong and powerful even before it's infection. Once tainted it began expanding it's influence yet further. The scions of the new cult slunk into the society of Thelema like the choking fronds of a creeping vine, patient and inexorable. The sons and daughters of the temple had grown strong, reaching the highest position of global authority by the middle the M40. It is around this time though, that the organisation began to diverge from the usual sequence of events when a powerful genestealer cult reached this level of infiltration.

The great patriarch of the order, known as father Typhon, or to many of the cult as the Old Wyrm, is a truly ancient genestealer. Ferried across the void in stasis by the hive fleet, Typhon was secreted into the space hulk the Age of Dreams along with many of his brothers. The hulk had been vomited forth from the warp before the fleet as it made the journey across the empty space between the galaxies. There it hung for a time before again being drawn back into warpspace. How long it remained there, none can say, as time has no meaning in the realm of the Gods.

In the beginning of M38 the Age of Dreams again appeared in real-space near the world of Draconith. It drifted for decades before eventually being marked by an explorator vessel for future investigation. The world of Thelema was tasked with mapping the hulk and recovering any items or artefacts of worth due to the presence of the mechanicus forge temple on the planet. The Theleman team sent returned with the soon-to-be new head of their order who was reverently christened by the xenobiologist leader of the explorator expedition. So the new cult was born.

The devotion to the machine God was slowly perverted into the worship of Typhon, who had come to be seen as the voice of the machine God itself, the true omnissiah. It was not an easy or quick transition, however, with many of the magos immune to infection, necessitating their eventual destruction.

The combination of the knowledge and mysterious nature of the adeptus mechanicus and the single-minded ambition of the cult made for a powerful combination. By M40.508 it was in control of many of the most influential institutions. But the cult had suffered it's own schisms in recent years. Many of the brethren felt something was wrong with the way plans were proceeding. This, in itself was troubling, as dissent in a genestealer cult is virtually unheard of.

Typhon was most pleased with his growing power, but he did not feel the pull of the hive mind as it drew close to devour Thelema. The constant whispers in his head were not those of the Devourer. They came from another place entirely, and they worried at the edges of his psyche like wolves nipping at the heels a great beast. This sent ripples of unease into the Broodmind of the cult in it's turn.

Far beyond Thelema, in the depths of space, lie the dead husks of the hive fleet that bore Typhon across the stars. Designated hive fleet Hephaestus, it was caught in a violent and sudden warpstorm soon after the Age of Dreams vanished back into the ether. The entire fleet was either pulled into the warp or destroyed. Not a single tyranid creature survived. As if this weren't enough to sever the link between Typhon and the hive mind, the creature that emerged from the warp was no longer a creature of instinct, merely following it's genetic directives.

(Edit: January 2019) I've removed some of the early tinkering and wip shots as the cult has grown. This was the first finished model, the neophyte leader, brother Eldir Yogoth with an ancestor relic. Yogoth was built a couple of years before Games Workshop re-released the cult in all it's glory. Hence the plasma pistol, which Neophyte leaders can't have. Arsed if I'm changing it though. He's a Ymgarl hybrid, and I plan on adding Ymgarl aberrants and genestealers to the cult in time. 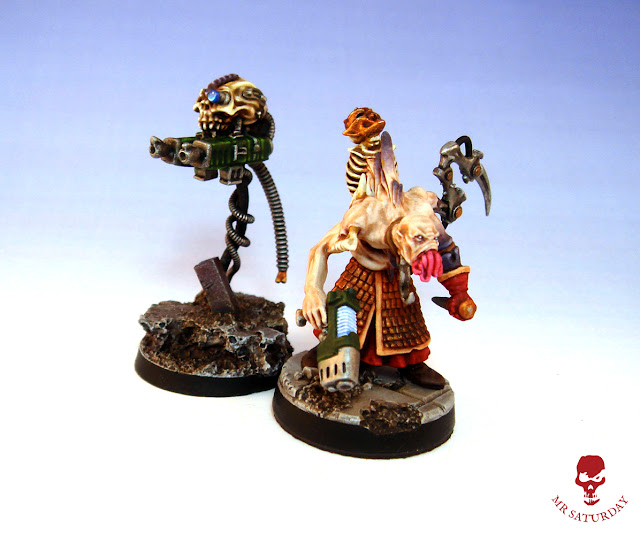 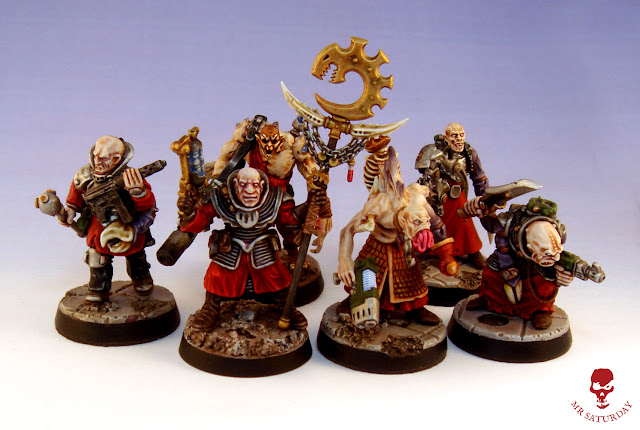 My acolytes so far. Rauss Arnatt holds the icon. I'm hoping to add another four to bring it up to a handy ten.

My aberrations, brothers Sloth and Welt. Blind and deformed, Welt relies on the auto-senses in his autocannon to see, while a generous amount of combat stims are administered to keep the pain at bay. He counts as a weapons team. Brother Sloth is one of the gorgeous new cult aberrations. 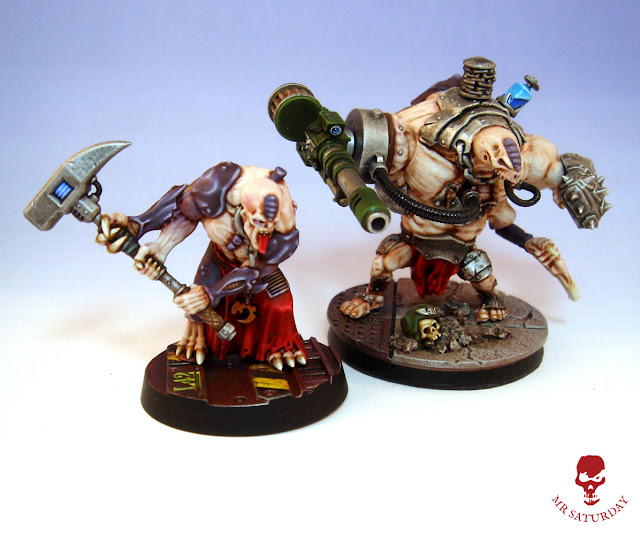 Brothers Aldren Dekker (acolyte) and Groust Yogoth (metamorph), with brother Sloth following behind. I'll replace these photos if and when the units develop. Groust is indeed related to Eldir above. 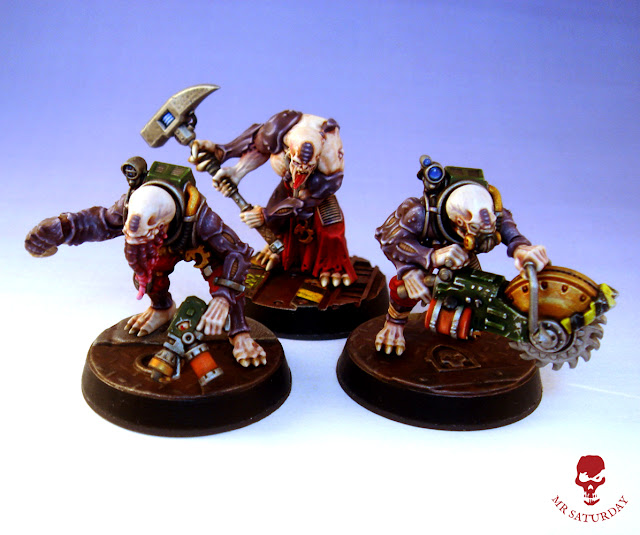 The Watcher - ancient relic of the Kabeiri.
In the heart of the principal Kabeirian forge temple on Thelema stands the watcher. Raised as a symbol of vigilance and eternal patience, this huge statue gazes up to the heavens awaiting signs of the coming of the Star Children. For generations the faithful have made pilgrimage here in order to pay homage and lay devotions and trophies at it's feet. The histories of the martyrs and heroes of the Kabeiri are attached to the stone with wax seals bearing the wyrm form. The skulls of notable enemies are also laid here to bear witness the the resolve of the cult and show all the fate of those who stand in it's way. Inquisitor Johann Krasek, Warlord Gornak Worldburna, The Ethereal Aun'La Auta and many others pass the ages under the watcher's gaze.

As the centuries have passed, the restlessness of the cult has found a focus in the watcher. So much psychic energy has been soaked into the stones that now the watcher is rumoured to shift it's gaze almost imperceptibly from time to time, as if searching. Deep in empty space the frozen, lifeless hulks of hive fleet Hephaestus drift silently through the void. It is the destiny of the watcher to hold vigil eternally for Gods that will never arrive. 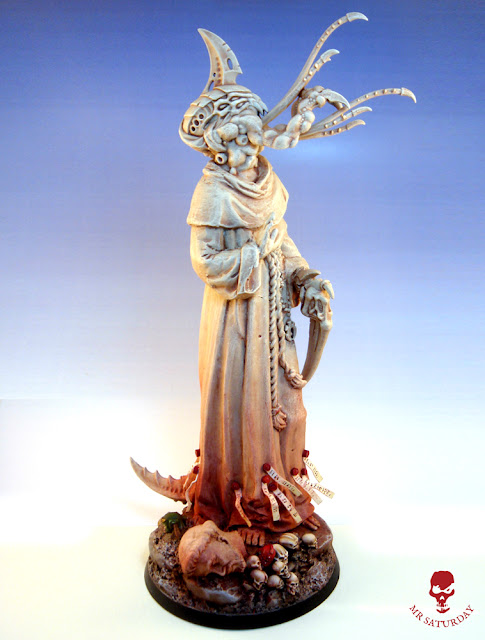 Kol Renko - jackal alphus
Kol rides a genesteed, a hybrid beast infected in the same manner as the human stock. Though these hybrids are less stable compared to their human counterparts, enough viable individuals survive to provide the Kabeiri with a stable of robost mounts that are highly sought after by the cult's jackals. Added to this, the broodmind allows a rider to form an intuitive bond with his chosen mount that allows them to function as one mind, meaning no reins or spurs are needed to guide the beasts.

These mounted warriors make superlative scouts, and foremost among them is Renko, a scout, sniper and assassin of almost supernatural talent, his void-given senses honed to killing edge by years in the wilds of Thelema. 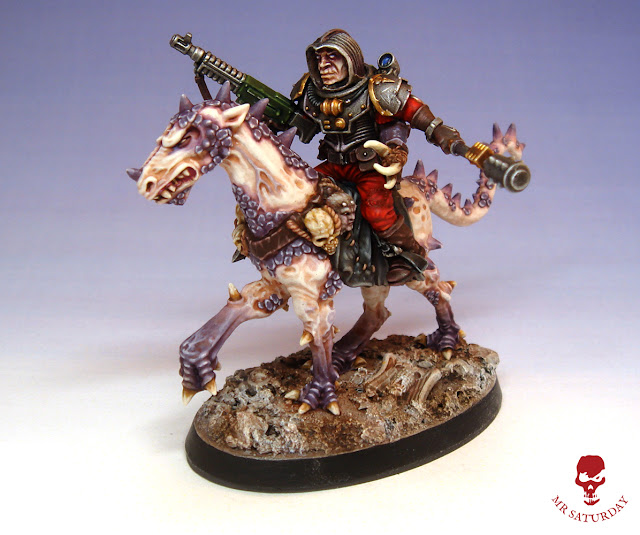 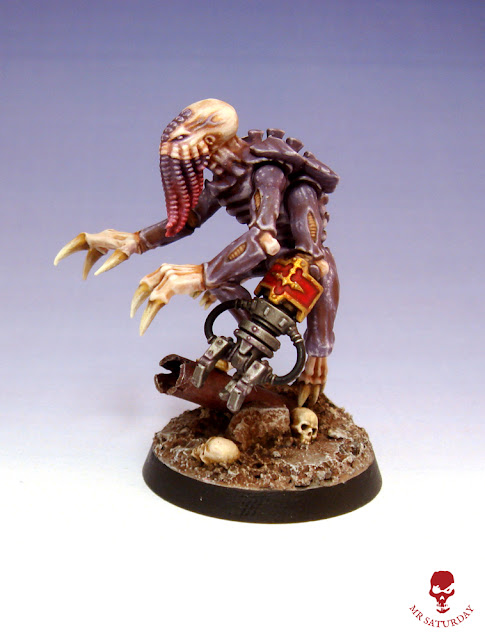 Cult Mindslaves
The holy ones of the Wyrm-Forged spread the blessings of the Star Gods under the direction of the grandsire himself. There is one blessed one however, who is only unleashed under the most dire need. One whom even the faithful are wary of, for they sense its wrongness innately.

Known as the Chimera, this scion of the cult is unique. It is an anomaly, its asymmetric form at odds with the perfection of those of the 5th generation. Its body shifts and alters over time as the genetic legacy of the hivemind boils within. New claws grow even as old limbs wither and are re-absorbed. Eyes disappear under chitinous armour which sloughs away to reveal new flesh. In this way the Chimera is a constantly evolving microcosm of the hivemind itself. This is as naught, however, compared to the fate of those the Chimera bestows it's blessing upon.

The unfortunates so infected are reduced to roiling, pulsating sacks of flesh within days. It is as if the patient procession of the normal cycle is overtaken by a berserk haste to evolve. Flesh splits and organs burst as the hyper-active alien DNA rushes to proliferate. Those few whose bodies manage to endure are reduced to less than animals, oblivious to all except the erratic sparks of the broodmind's imperatives. They form a particular bond to the Chimera who can better compel them to serve the cult, albeit in the most rudimentary fashion. They are herded into battle ahead of the main force, their unnatural resilience and senseless fury making them brutally effective shock troops. 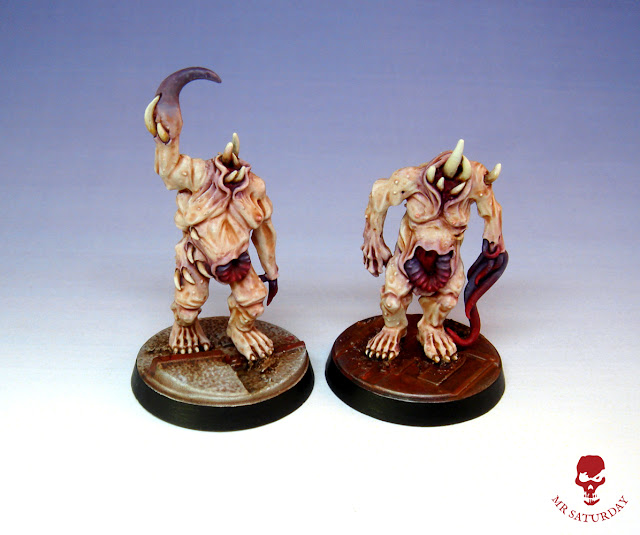