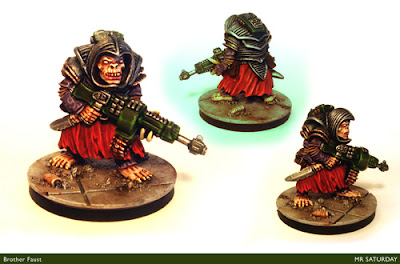 Today sees a long overdue addition to the cult in the shape of brother Faust. He's a 2nd generation hybrid, and a big fellow at that. That's a ripper gun he's got there, so he'll operate as support for his smaller brethren. A fun model to paint, I do love the ribbed armour. Here he is with one of his smaller fellows.

There's probably some ogryn DNA is there somewhere. Heck, that's probably his granddads gun. I'm looking forward to getting some game time in with him. Praise the allfather!
Posted by Mr Saturday at 3:54 PM 20 comments: 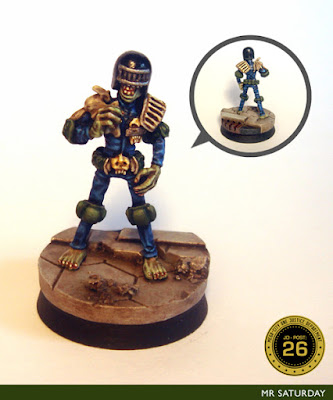 This week see the final addition to the dark judges, Deadworld's chief judge, Judge Death. He's probably my favourite Dredd villian, and he's dropped enough one liners over the years to show that he's definitely got more of a sense of humour in him than his brothers. It's probably the rictus grin. His recent outing in 'Dreams of Deadworld' portrays him in a much grimmer light, but still, he's ma boy.

This sculpt of Judge Death is TINY. He and his lieutenants are 25mm really, but it's still my favourite sculpt of the dark judge's leader. He was quite straightforward to paint, even if I kept finding parts of the model I'd missed sorting during cleanup. Nothing like taking a file to an almost painted mini.

With Judge Death finished, that completes my dark judge project. I'll no doubt pick up the Mongoose spirit forms, and probably the Foundry versions too, but that's for another day. Next up I think it's time I took a crack at an actual judge. Judge Williams, to be precise. Bruce Campbell's block judge.


As always, next week it's back to Cheetor at Sho3box.
Posted by Mr Saturday at 1:50 PM 6 comments: 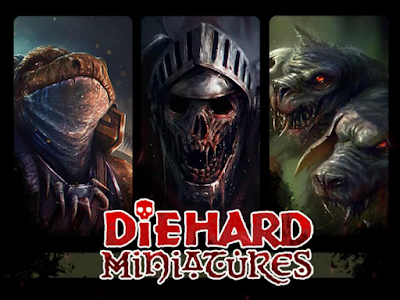 For those of you with a liking for Oldhammer miniatures, and for those of you that just really like great fantasy minis, the Diehard Miniatures kickstarter is currently ongoing. There are several factions, from the amphibious tech-laden Eru-kin to the undead, humans, goblinoids, humans, chaotic monstrosities and even and hawkmen. There are quite a few stretch goals planned too. The pledges allow some mixing and matching between factions, along with a large add on section if you're only after a few models. 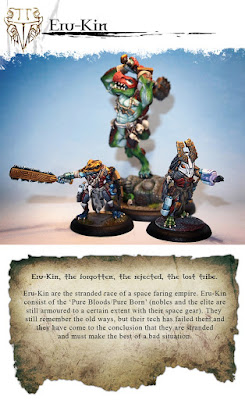 Personally I'm looking at the snakemen, if they get unlocked, and the dwarf boar centaur. Anyone with an old school chaos dwarf army might be interested in this fellow. He looks happy not to be pushing a large warmachine/lawnmower. If you get me.

These would work great for Warhammer, Age of Sigmar, and with the expansion for Frostgrave imminent, I'm looking at the undead knight. So, take a gander, there's a lot of good stuff to choose from.
Posted by Mr Saturday at 3:39 PM 2 comments: 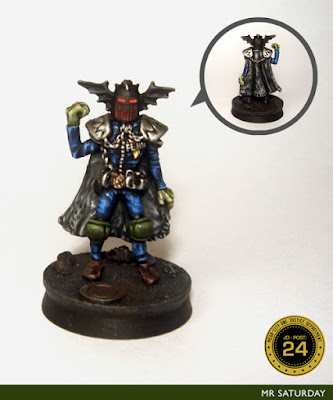 Phew! That was close. I really thought this was the one that was gonna get past me, but no, Judge Fear just makes it in time for the deadline.

My fears were groundless. Ahem.

This week sees another of the dark judges painted, the Citadel Judge Fear. It's not my favourite of the old dark judge sculpts, but like Fear himself, I can't help but like it despite it's failings. His ankles in particular gave me a nightmare. Removing his tab and pinning them to the base was akin to trying to decide which wire to cut before the timer reached zero and the bomb went off. Steady hands.

Judge Fear is the no-fun-but-you-have-to-bring-him-cousin of the dark judges. ALWAYS first to get smashed up, and a bit jealous of his brothers cooler powers. Plus: mantraps? A shrunken head on his belt? Bat wings on his helmet, which also has a little door he opens to scare you?

We got even more evidence of Judge Fear's loser status in the recent Dreams of Deadworld series in 2000AD. I just can't help rooting for him though. He tries so hard, bless him.

With Fear done, that brings the brothers up to three. I bet you can't guess who's next on the painting table? Next week it's back over to Cheetor in the continuing game of Dredd tennis.

This morning, the owner of my FLGS, Ronan, posted an event to help raise funds for Cancer Care West in Ireland. In the same post he told us his wife has recently been diagnosed with cancer.

I'm going to try and help out with raising money for the event, on the 17-18 October, so naturally I thought of all you fine folks. Any and all support would be greatly appreciated, the details are below.

“This is going to be an event to raise money for cancer care west, where a bunch of volunteer gamers will attempt to keep games running in the store for 24 hours from 12pm of the 17th to 12pm on the 18th. Everybody knows someone who has been affected with cancer and this summer gone I was directly affected, as my amazing wife was told she had cancer. That is why we raised money at the last pre-release (almost €1200) and that’s why we are running this 24 hour GAME-A-THON!! Cancer care west are an amazing organisation and any help we can give them will mean a lot to them and all the cancer patients they help.”