Siege Rules - Blood in the Badlands

In  the continuing series of  'out of nowhere' releases from GW, we're getting the first reports of a new hardback campaign book for warhammer called Blood in the Badlands on warseer, the first of several, according to rumour. The blurb goes thus: 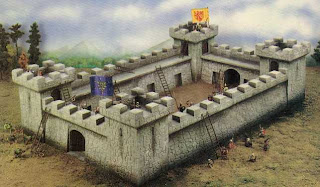 'Blood in the Badlands is a 96 page hardback campaign book for Warhammer. Inside you'll find new background, a complete set of campaign rules, four massive multi-player scenarios, a Warhammer Siege expansion as well as additional rules for playing Warhammer in vast caverns below ground. All this is framed within an exciting studio campaign, as eight players, including the White Dwarf team, seek to carve out the largest empire so the ensorcelled castle, Fozzrik's Flying Fastness, will land in their realm and its amazing treasures within can be claimed.'

At £20, this seems a pretty decent price for what sounds like all sorts of fun. I'm a major siege fan, so I'm hoping there might be a plastic kit or two to go along with this release. I'm hoping naval rules are coming along in this series too, and I must say I'm loving the direction GW are taking with 8th ed. I can barely keep up with all the warhammer goodness flowing out of Nottingham these days. Long may it continue.
Posted by Mr Saturday at 9:41 AM 8 comments:

I just realized that Mr Saturday's Mumblings turned a year old back on the 2nd of November! Happy birthday to me. That went fast.

Keep dropping by in year two for the continuing fimir army project (update coming), yet more undead, the kick off (hopefully) of my chaos dwarf force and general warhammer and gaming ramblings, rumours and general grooviness.

Email ThisBlogThis!Share to TwitterShare to FacebookShare to Pinterest
Labels: General

The latest rumours from Warseer seem to be confirm the vampire counts as the next warhammer army book release, in January. It seems vampire counts players are in for quite the treat in the new year. I am agog with anticipation. 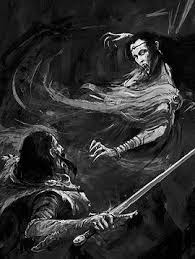 New info on vamps, all appears to be 100% accurate: 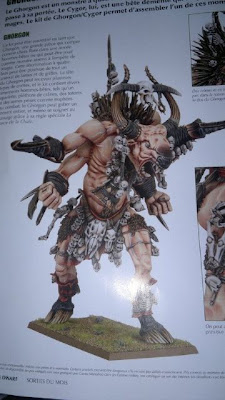 GW appears to have fired us another curveball this month, in the form of new plastic and finecast models for the beasts of chaos. It's great to see the Cygor, Ghorgon and Jabberslythe finally get models from GW. The plastic kit, I'm guessing Cygor/Ghorgon looks good, at first glance the Ghorgon option looks a lot better than the Cygor, which looks slightly awkward to me, but I'll hold final judgement until I see it in the flesh. There looks to be loads of bits on this kit, perpare for an avalanche of converted chaos giants. That is, if anyone used them, though I can plenty of parts for a siege giant for my chaos dwarves in this kit.

The Jabberslythe looks great, but I wish it was plastic. It's really anyone's guess with GW these days, isn't it?

Thanks to Fields of Blood for the image.
Posted by Mr Saturday at 8:17 PM No comments: 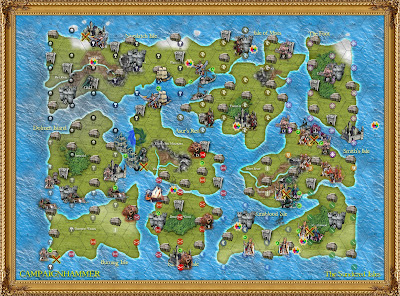 For some years now, myself and my gaming compadres have been trying to put together a system for running a decent warhammer campaign. We've had some successes, with mini campaigns run over a long weekends and some attempts at designing our own system. But the holy grail of campaign gaming eluded us, the long-term narrative campaign. Recently, it seems as if we have cracked this particularly hard gaming nut. The problems ranged against you doing this are manifold. Coordinating player's games and orders, people living in various parts of the country and thus the problem meeting for games, life in general and campaign fade out syndrome, to name a few.

Using a modified version of the original mighty empires rules plus various extra rules from old White Dwarf articles, we've set up a campaign running among nine players with a dedicated non-player gm. We've set up a blog for all map updates, fluff and general campaign news, as well as a dedicated email group. I think the key to it all is the gm. someone willing to run the campaign long-term. It's a lot of work, and we're lucky enough to have such a person. That in place, I have taken on the mantle of map-maker and updater (see the pretty picture above) which also helps. When we meet up for a campaign weekend, I have a large-scale version of the map printed out so we can set the game up easily.

We've so far been lucky with players too, everyone knows it's a commitment, but not overly so. Tabletop games can be resolved without playing the actual game due to an alternate system, but those the want to and have the time to play can. We've had only one player fall at the first hurdle and just not participate, and as we have nine, that's not too bad as we can compensate.

As a big fan of narrative games I'm loving it. There will be scenario driven games depending on the hex and various conditions, and it's way more fun to have the host of  the vampire lord Stephane Dreux send his rotting fleet to brave the magical storms and land on the island of Asur's Rest to assault the remote dwarven coastal settlement there than x vampire counts army battles y dwarven army.

We're still only in year 2, but it looks like it will run it's course. We still need to settle on specific victory conditions, as I think all good campaigns need to have a definite finish point, or they just fizzle. We're having a blast so far though!
Posted by Mr Saturday at 11:31 AM 3 comments:

Special rules are: undead, miasma of deathly vigour and regeneration. It can carry either an Unholy lodestone or Balefire. More on these options later. 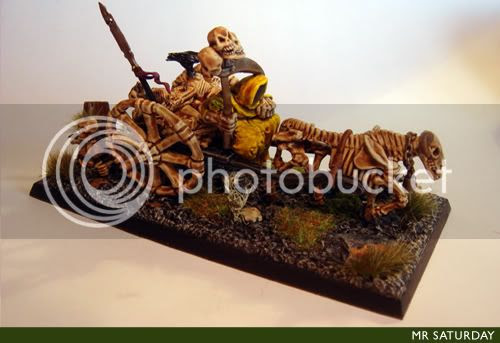 It's a support unit which doesn't count toward your core allowance. It's a mount option for your necromancer, but honestly it doesn't offer him enough protection and takes up valuable character points. While it does get thunderstomp, it isn't a combat unit. It's most valuable use is buffing your units and as a dispel dice soak.

Miasma of deathly vigour is a bound spell (3) giving Always Strikes First until the start of the next magic phase. This can work nicely with a vampire with the nightshroud. However, with most undead infantry units it is of little consequence whether they strike first or not, but it is useful to hamstring units that normally do have ASF, like high elves. It might also be useful for blunting those ogre charges.

Balefire can be very useful, (-1 to enemy casting rolls for casters within 24") but I think to really get the most out of this you need two corpse carts. -2 to all casting rolls can be really annoying. To an army that relies on the magic phase and includes units who are impervious to mundane attacks, this is a good choice. Getting both carts within 24" of the enemy caster can be a little tricky, however.

The unholy lodestone grants an additional wound to targets of Invocation of Nehek within 6" of the cart. It's quite meh, unless you have ethereal units (it won't heal vampire units) within it's 6" range. It's irrelevant how many lodestones you have in range too, you still get only 1 additional wound. Now, if it healed vampiric units...

Overall, the corpse cart seems really useful until you look under the hood. It's almost worth taking, and I'm sure there's a build out there it might work well in, but for me, the points are still best spent elsewhere. Shame, as I love the model. Perhaps if the new army book improves the core choices it might be a more viable option.
Posted by Mr Saturday at 4:58 PM 5 comments: 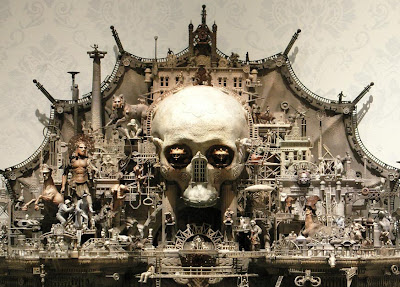 While not really a gaming post, I had to pop up a link to this guy's site. A friend sent it onto me today and I was pretty blown away. An astounding selection of work, with the sculpture being of particular interest, especially when some of the pieces are entitled 'Church Tank'. In context to modelling and conversion, it may actually offer some folks a healthy dose of inspiration.