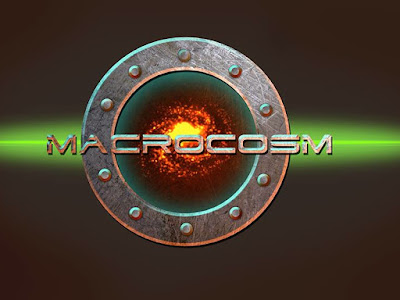 If you likes you some Rogue Trader inspired miniatures, Macrocosm's new Kickstarter is now live, and very much worth a look. They are using it to launch two new races, the mysterious 3rd race, who utilise remote battle suits, and the Grem, a curiously well organised faction of greenskins. There are some nice stretch goals, (and some exciting ones to come) and they are offering deals on the existing factions, the Malignancy and the Diggers (Genestealer Cult and Squats). So if you were thinking of picking some up, now's the time. 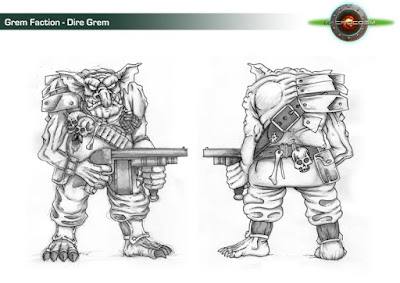 Unsurprisingly, I'm a big fan of the Malignancy, and I'll be reviewing the new host specialists and infected Ogs very shortly here in Mumbleville.
Posted by Mr Saturday at 12:13 PM No comments: Links to this post 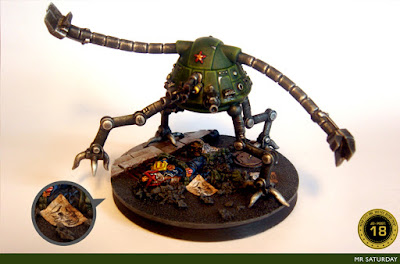 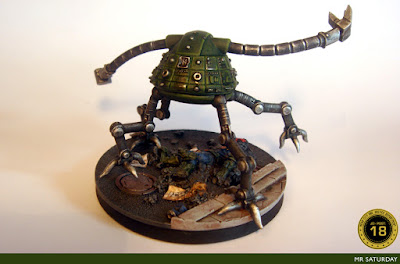 Today's Judgement Day submission is the Karpov MF7 Sentenoid. Deployed to support the Sov invasion of Mega City One, this robot was a mainstay of the Sov forces during the Apocalypse War, one electrocuted Mega City One judge at a time. 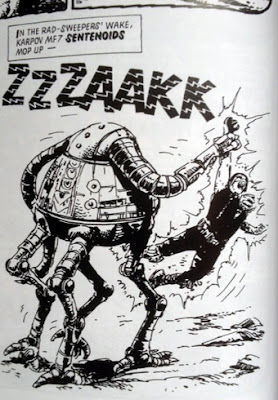 I've been ticking away at the Sentenoid for a while now. It comes in eleven parts, and I pinned the hell out of it. It required minimal clean-up. It's attached to the base by only two of the four legs, so pinning was the only way. I wanted to go nuts on the base too. The Sentenoid takes up very little of the actual base, so I had plenty of room for a dead Mega City One judge and some Apocalypse War paraphernalia. The truly devoted might recognise the leaflets scattered about the base. 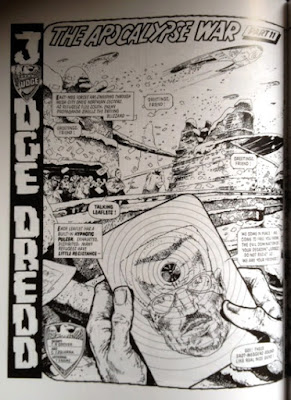 It's a very nice model when it's all together, and surprisingly large. I also tried out AK Interactive's Fuel Stain effect on some of the vents and such. It's a nice oily, glossy finish. A little hard to see on the photos, but it adds another level of interest to the model. They are oil-based, but that's no real impediment. They do a great range, so well worth checking out.

With the Sentenoid finished, that completes the Sov Invasion box minis. Here's the whole gang: 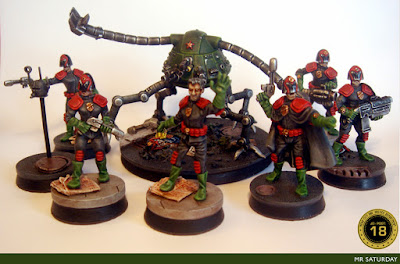 There's only one more Sov left in my radar now, the main man himself. I've been looking forward to getting a brush at him for some time now.

Next week Cheetor gives us his latest slide of 28mm Judge Dredd fun. 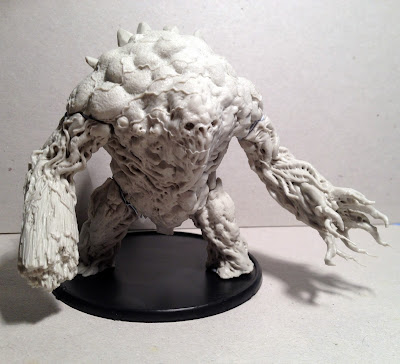 I recently got a very nice package from the excellent Tim Fisher from Mierce Miniatures. Tim knows my affection for things bog-related, and saw fit to send me this enormous fellow for review. In case you haven't seen him, it's the Erainn Morannach from the Darklands: New Kindreds Kickstarter. Let's dive in, shall we?

The Morannach is part of the new series of miniatures for the Erainn kindred, based on Irish/Celtic mythology. Here's a snippet of background:

The Érainn are, put very simply, the dark age Irish! Their society is mostly Christian but fairly barbaric, and as they are assaulted by the Fomoraic and the Norse and the Atalantes and many others, they are becoming more and more martial and turning to the old ways of Danu the Earth Goddess.

Thus, wild Irish warrior-bands like those of old now defend the north of Eriu against the threat of the sea devils and raiders from elsewhere, and Danu herself lends aid to her people through the beasts of the bog, peat and marsh - terrifying creatures with an implacable hatred of all that destroy the natural world. With those at their side, the Érainn are a powerful foe indeed.

Oooh. That makes me all a-quiver. Here's some of the concepts:

Most of you know of Mierce at this stage, the quality and design of their models is invariably of a superb standard. Let's get in close to this bog beast and see if he matches what we've grown accustomed to from Mierce.

The Morannach comes in five major sections: the body, arms and legs. He's a big fellow, sitting on an 80mm base. There are also three sprues of branches that can be attached to his arm and back. You can click the images below for a more detailed view.

With a creature made of mostly peat, it could be easy to end up with a bit of a featureless mess. This guy, however, is covered in identifiable detail and several great textures. Skulls, rocks, bark, earth, weird veins and the barest echo of turfy musculature, there's plenty here for a painter to go to town on. The eyes in particular are nice, and are begging for an eerie glowing effect. As to the technical quality of the pieces, it's excellent. The parts in the images are are untouched. As you can see, there's minimal clean-up needed. Snip off the gates, a little sanding on the joins, a nice hot bath and ready for assembly.

All the pieces fit very snugly into their slots. The contact areas are quite broad, so some scoring of the contact points should be enough for your glue to key into for a secure bond. There are also the branches: 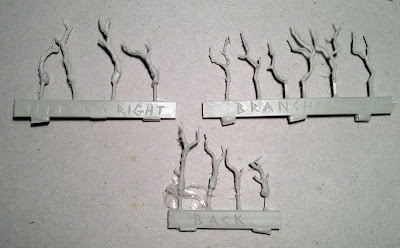 Now you can use these or not. They will make the model a little more fragile if you do use them, but that wouldn't stop me. I think they add a lot. You can see the intended placement here: 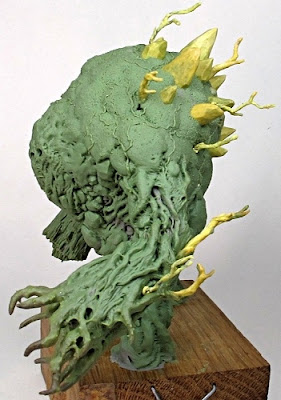 I do like the way they are flowing back in roughly the same direction. They also break up the silhouette of the Morannach a little and add some more visual interest to his back.

A quick dry fit, and you can see the size of this guy. As I said, that's an 80mm base he's on there. I haven't attached the branches here.

I love this sculpt. For me he's an instantly desirable giant-sized model with a lot of nice detail and enough going on to reward a good paint job. It's all you could want in a massive bog monster. My intention is to paint him up to use as a giant fenbeast for my fimir, but looking at the rest of the Erainn I think I may have to give Darklands a closer look. The Jutes and Atlantes look pretty damn sweet too...

The Morannach is due to be released in the Autumn, once the Kickstarter shipping has completed.
Posted by Mr Saturday at 5:47 PM 11 comments: Links to this post 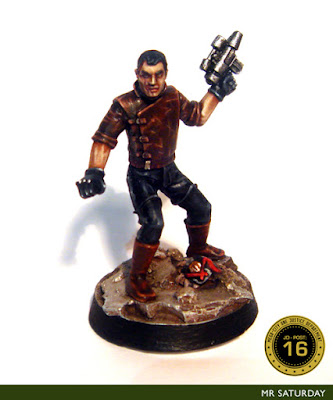 This week's Judgement Day offering is one of my favourite bad guys from Judge Dredd, Orlok the assassin. Orlok was an East Meg One agent who poisoned the water supply of Mega City One, leading to the mass outbreak of block mania, the precursor to the Sov invasion. He also killed Judge Giant. Yes, Orlok is a massive jerk, but he's one of the few who can go toe to toe with Dredd in a fist fight. A must have for a Sov collection really.

I had a bit of a conundrum with Orlok's colour scheme. I was not in love with the colour scheme of the outfit the model is based on. Here's the original:

While I like my comic character miniatures generally to follow established colour schemes pretty closely, I wasn't going to go down this road with Orlok. He just didn't seem like a bright and lively kind of guy. He doesn't give you a fair chance to reach for your gun, he just shoots you in the head. More than once, in all likelihood. So, I had a look at the Mongoose version:

No joy there either. That hair...

So in the end I went for a pretty modern looking scheme, with a worn leather jacket and boots, black trousers and gloves. I put most of my time into the face. Orlok has a very distinctive scar, and I accentuated it a tad to make it more of a point of interest. As the gear is very modern day, (If we ignore the rolled up sleeves. Orlok is so hard he can roll up leather sleeves.) I also added the smashed Judge's helmet to anchor him back into the Judge Dredd universe.

Next week it's back to Cheetor for another dose of Judgement.
Posted by Mr Saturday at 1:00 AM 8 comments: Links to this post

Macrocosm have announced they intend to run a kickstarter this Autumn (starting 27th August) for two new factions for their game. You can read about it here. They are the Grem, and the 3rd Race. Here's the lowdown:

“Who are the 3rd race? As yet no one knows, they use mechanical suits of unknown make. There has never been a living entity captured on the battlefield. Intelligence suggests these suits are being controlled by craft in orbit of the colonies.” 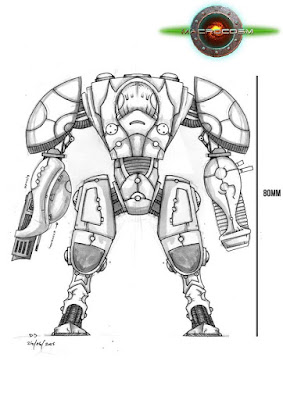 "Who are the 4th Race? The Grem Alliance! The Grem Alliance are a race of three different creatures who used to be slaves. They banded together to overthrow their evil slave masters centuries ago, and since then have grown in size and intelligence. They are very militaristic and expansionist.

Their main industry is War. The Basic Trooper is supported on the battlefield by its distant cousins the Dire Grem and the Gremlings, whilst not exactly as evolved as the Grem are they still have found important roles in the Grem society.” 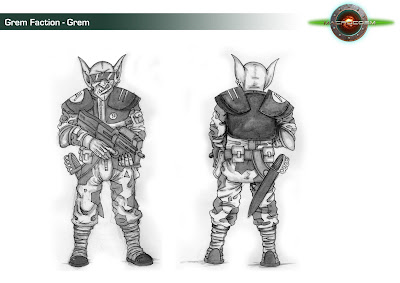 I may have been lucky enough to have had a hand in designing some of the upcoming range, and they are going to be a lot of fun if the Malignancy and the Diggers are anything to go by. Speaking of the Malignancy, I do love anything vaguely cult related, and there are some very tasty things coming from Macrocosm for fans of the Malignancy in the next wee while.
Posted by Mr Saturday at 10:53 AM 8 comments: Links to this post