Wait, this isn't an undead warrior? What gives?

Last week I finally succumbed to the lure of Gaslands. Several friends are deep in the garage already, looting their children's toyboxes or vanishing into local toyshops for toy ca- I mean fine detail 1:72 scale vehicle models.  You can see the results of Witness Weekend: Part 1 here. There is something deeply satisfying about taking a literal toy and modding it with model parts to make something entirely different. The hardest part for me was gluing the wheels. That's where it stops being a toy. No more vroom vroom neeeooowww! for you. Well, there will be, but not as originally intended.

Of course, when I slipped off the precipice into this new rabbit hole, I discovered that several companies supply armour, weapons and most excitingly, crew and drivers. I have several packages of weapons, amour plates, dozer blades, turrets, drivers and crew en-route.

Now, this particular car, The Preacher, is part of the Faithful Sons gang. A collection of mutant evangelists spreading the word of the day of ascendance. (reader squints suspiciously) Some of the crew I have on the way have a definite cult look about them too. I'll try to keep the arms down to two though. Probably. Though there might be a 20mm genestealer proxying as a motorbike at some point. So yeah, at the moment I'm toying with the idea of a post-apocalypse Mad Max style genestealer cult gang. They may end up being just a bunch of mutie nutters with a religious bent, we'll see. 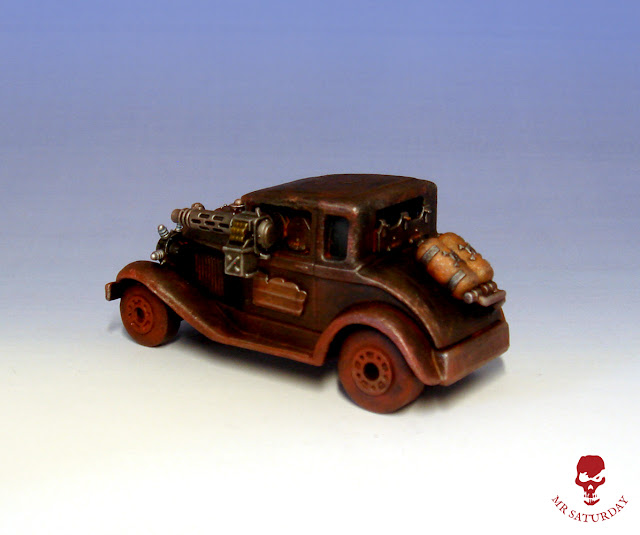 I made The Preacher from an old car that had previously served in Dark Future, some twenty or more years ago. There are several other cars from that time who will now serve as the basis for the rest of the Faithful Sons. I had no dedicated parts for this guy, so I used the contents of my ample bits box for the guns, armour and such. Once again I made use of the new GW Contrast paints to tone down weathering and add depth. The only part of the car that had anything bar glaze, wash and drybrush were the headlights. AK Interactive's washes are a godsend for vehicles. Fuel Stains and Streaking Grime being two favourites. and I also used some Basecrafts pigments for the ruddy dust and rust.

As soon as supplies arrive I can get busy in the chop shop for the next couple of vehicles.
Posted by Mr Saturday at 10:07 AM 10 comments: 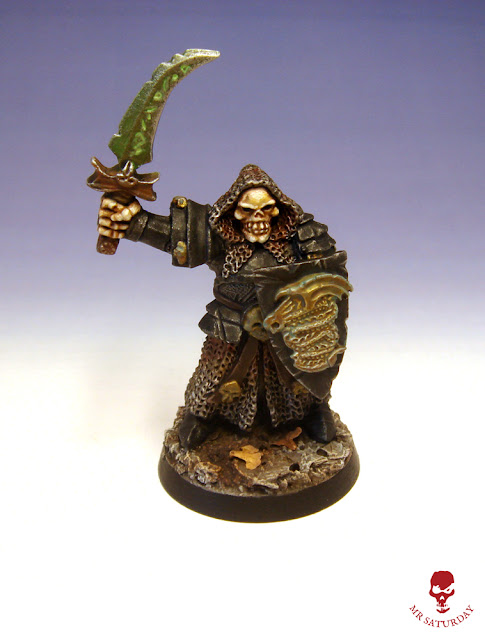 I'm still enjoying painting the living dead at the moment, so today I present the wight Einar Haugen of the Order of Dust.

I've had this fellow since he was first released back in the 90s. He was one of eight spectacular wights sculpted by Gary Morley. Each of them looks like an undead warlord in it's own right. I needed a couple of wights for my undead warband, so that seemed like a good opportunity to finally paint them up.


This was also my first outing with the new Games Workshop contrast paints. My own take on contrast is to integrate it into my existing way of painting and see how it fits in. I wanted the wights to have black iron armour, and having seen a very helpful tutorial from Tyler Mengel on black armour, I set to work.

I've found painting black armour a bit of a challenge in the past. Priming with Leadbelcher spray, I applied two coats of Black Templar paint mixed 2:1 with contrast medium. Contrast medium is a must have when using the new paints. It opens up so many more options to control the translucency of the paint. The effect of the black over metallic was to give the armour a black, oily, metallic sheen. Something that I'm not sure I could have achieved by simply drybrushing over black. I am very much sold on the contrast paints as another arrow in my painting quiver. 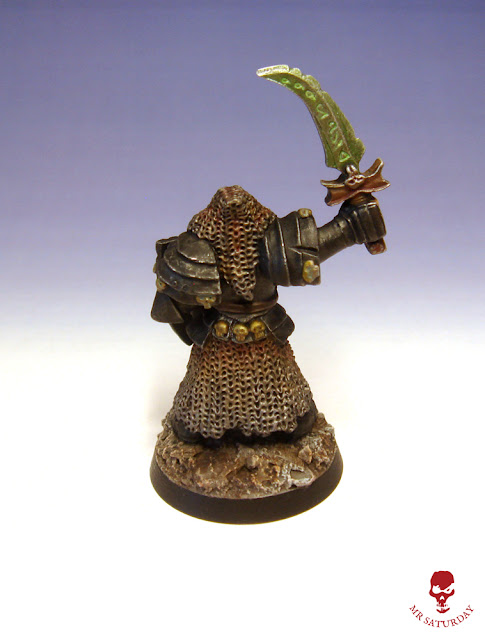 I also used Nazdreg yellow to tint areas to look more gold/brassy. Again, this saves me a lot of time without any loss in quality, and that, my disciples, is the painting grail. With washes of red, yellow, brown or green you can add rust, verdigris and filth to further tint the metals. So, with 90% washes and an all over drybrush of Mithril Silver the metal is done. It took about half the time I would have expected. 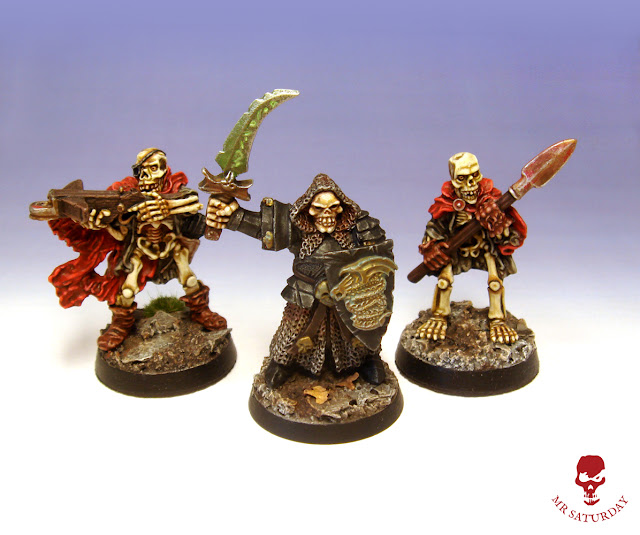 The wight blade took a little more thought. Several glazes of Waywatcher Green and heavier washes of Scorpion Green mixed with Lahmian Medium built up the colour. I wanted it to look like the metal was suffused with the magic of the wight blade rather than glowing. Again, a drybrush of Mithril Silver over the top finished it off.

Einar here is the first wight from my latest version of the Order of Dust. Their ancestors fought in ranks through several editions of Warhammer, but now it is time to pass the banner to a new iteration of the Order.


My next wight will be hot on the heels of Einar, and has a helmet any undead king would die for. Again.
Posted by Mr Saturday at 3:29 PM 12 comments: 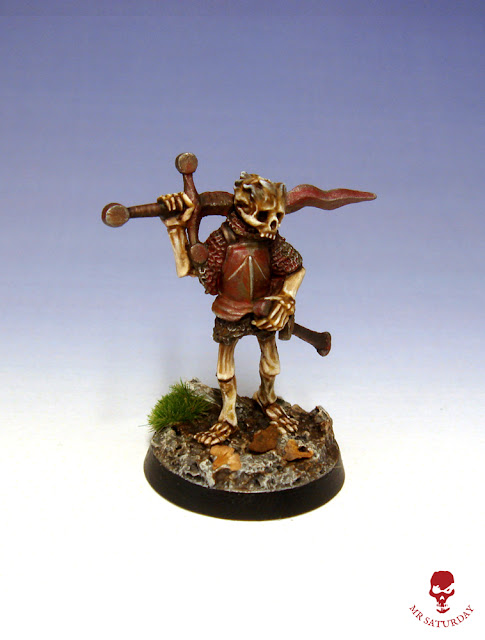 It's that time of year again, and so my thoughts turn back again to my first love, the undead. I'm adding to my undead at the moment for Warcry, and the bug has got me to paint more.

The inspiration for the range comes from the work of the likes of Dürer, Holbein and Bruegel. I am a huge fan of their work, so I was very excited to see it realized as a range of miniatures. There are some real greats in there, such as skeleton with giant fish. Mordheim anyone?

As for Sergeant Wollf here, he will serve as a skeleton champion in my undead warband. I get the impression he was quite the dapper gent in life, as most Landsknecht  were. I bet his hair was magnificent. There are even some wisps of it still clinging doggedly to his skull. I bet he combs it when he thinks nobody is looking.

I have refined my rusty armour technique a little more on Wollf's gear. Sometimes I like it more orange, other times more red or brown. It depends on the model. 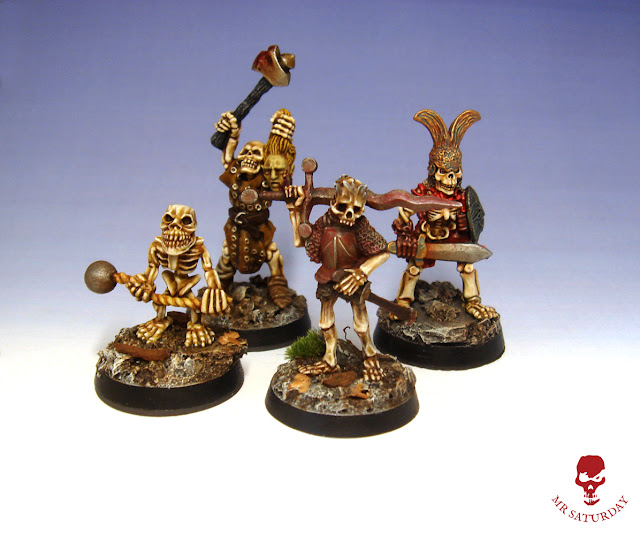 You can see here that the ToD miniatures are actually quite big. Looking at them online I thought they would be quite small, but no, they are pleasantly chunky. Wollf is seen here leading his small but growing unit.