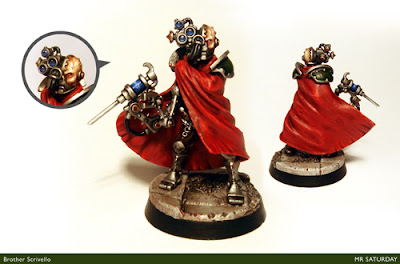 It's been a while since I added to the cult, but today brother Scrivello steps up. Scrivello is an apothecary of sorts, a loyal retainer to Magus Kurgan and an expert in human and genestealer physiology. He can sew wounds and repair organs that shouldn't even exist. He's also an expert mechanic, which is handy when you're a half-cyborg alien hybrid with a broken ankle.

This model was converted from the Mordheim Aenur, for a painting challenge that saw some fantastic entries. The only common link was every model started out as Aenur. It was a fun exercise, all the more so for seeing what the other hobbyists came up with.

It took some elbow grease to dig out the elf from the cloak, but he succumbed in the end to make way for it's new wearer. The adeptus mechanicus parts are from the kataphron servitor kit and the dark elf wrack kit, both conversion gold. I did replace the syringe needle with brass rod, I could see it snapping in his first game.
Posted by Mr Saturday at 9:38 PM 10 comments: Links to this post 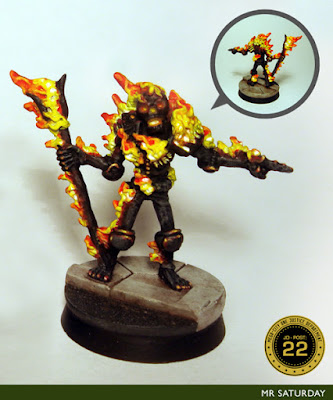 This week it's one of the dark brothers, Judge Fire. The dark judges remain my favourite Dredd villians by a mile. I'm enjoying the 'Dreams of Deadworld' series in 2000AD immensely at the moment, and it put me in mind to come back to my set of the Dark judges and get them finished. These are the Citadel version from the mid 80's. Small, but full of evil. 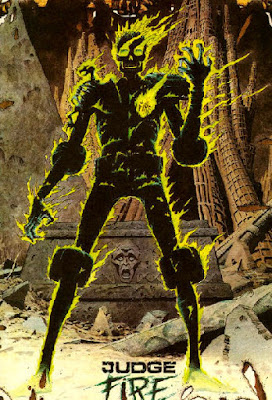 I wanted Fire to look like a blackened corpse that's burning internally. Fire can be tricky to get right, but I'm pretty happy with the result. Lots of washes and glazes over a bright yellow base was the order of the day, including a white wash for recesses where the heat is most intense. I also painted some highlights on his body to give the impression of heat emanating from within, like a burning coal. This also served to guide the eye to areas that would be lost amongst the black. Fiery toenails for the win. Luckily there were plenty of nice examples in the most recent Fire artwork to use for reference. 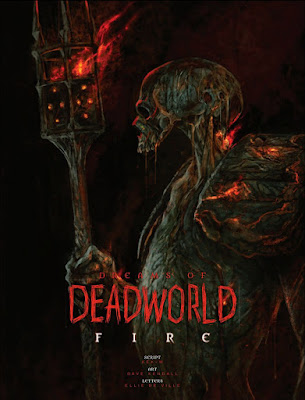 With Fire done, that's half the dark judges finished. It would be a crime to not go ahead and complete the set, so expect more from Deadworld's finesssst next time.

Posted by Mr Saturday at 11:28 PM 6 comments: Links to this post 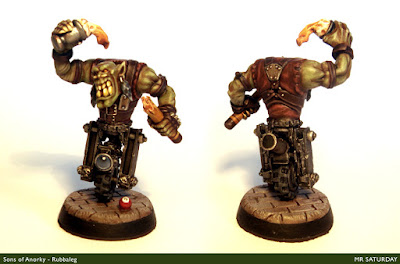 Quite a departure today from my recent subjects. With a gaming weekend for Cheetor's birthday imminent, we're going to give the Brewhouse Bash a go. Cheetor (Paul) has already posted his inexplicably attractive Patrick Swayzork, (Click it, it's really worth a look) and there are other rather excellent brawlers in the works. For anyone who hasn't played it, the Brewhouse bash is an old game that came with White Dwarf #223. A pretty random affair that looks like quite a laugh, and a call to paint up an ork brawler is hard to resist. 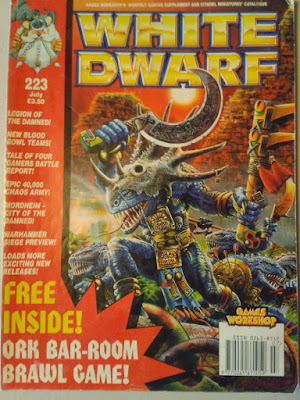 Rubbaleg is the first ork I have painted in close to thirty years, and I enjoyed painting him a great deal. I used mostly Caucasian flesh tones and then some green glazes rather than using green from the word go. Adding the pool ball and snapped cue gave me a laugh too. Several friends profess a great love for painting greenskins, and I can see why. The large caricatured faces are wonderful to paint.

I've always wondered why orks lend themselves to being themed so well. There's very little that you can't get a chuckle out of orkifying, so humour is probably the key. I have some plans for a band of greenstealers myself, but that's down the road a ways.

So, here's hoping Rubbaleg knocks a few teef out at the weekend. There will be a game report next week!

Posted by Mr Saturday at 11:36 AM 7 comments: Links to this post 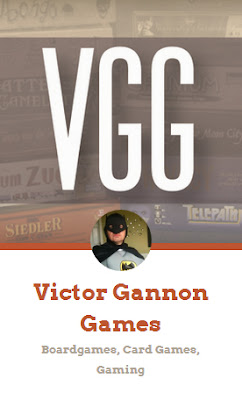 Today, in a flurry of self-promotion, I point you over to an interview I did for VGG, run by the powerfully charming Victor Gannon. Vic is the man behind the mighty KnaveCon, a behemoth of the Irish games convention calendar, and a damn good time. Am I talking about KnaveCon now, or Vic? Both, in truth.

Anyway, here's the link. Victor is a boardgame nut, so anyone with even the mildest interest in boardgames should check out his sterling reviews. In particular, anyone from the Irish gaming scene should make it their business to get to KnaveCon for the BIG FUNS.

Also, if you are playing a game with Vic, never trust a word he says.
Posted by Mr Saturday at 10:55 AM No comments: Links to this post


This week sees Judgement Day reach post twenty. It's been a fruitful collaboration thus far, with over four months of weekly submissions increasing our respective collections. This week, to conclude my East Meg One project I give you the main man himself, War Marshal Kazan.


Kazan is a pretty hilarious mini, for a murderous dictator. He's sending everyone to Siberia with that finger. Everyone. The sculpt is a fair bit more buff than the character in the comic, and that moustache...

Apparently Carlos Ezquerra (the artist who worked on the Apocalypse War series) gave him that little moustache as it was quite popular with fascists during the Franco years in Spain. It gave him a chuckle, as it gave me one when I was painting it. The tache, the weird shades, the white crew-cut, he's just fabulous, and manages to totally pull it off. The fact that he's a total bastard helps his cred too. I can't wait to get him on the gaming table.

With Kazan finished, that concludes my East Meg One project. I now have a hearty group of Sovs, enough to give me options when picking a force. There are at least two new Sov minis coming down the line, which I will certainly be adding to the collection once they are released. For now though, here's the whole gang.

So what next? Well, There are some Citi-Def waiting to oppose the foreign invaders, and Mortis is looking very lonely in the cabinet all on his own...

Back to Cheetor next week!
Posted by Mr Saturday at 11:33 AM 8 comments: Links to this post

I've gotten to be quite a fan of the Macrocosm line of miniatures over the last while. Macrocosm leans heavily on the Rogue Trader era for inspiration, often taking long abandoned but still well loved factions such as the Squats and the Genestealer Cult and giving them a new lease of life. The range is growing extremely rapidly, with their current Kickstarter (funded and approaching the first stretch goal at the time of writing) giving us two more factions and new units for the existing factions. I've been lucky enough to be involved with designing the concepts some of the new models, and there are some very cool things coming.

Today, however, I'm going to look at some of the new Malignancy releases. First up, the Malformed Host Special Weapons set.

The Malignancy are a Godsend for anyone building a genestealer cult. Beforehand, anyone assembling a cult faced quite a job finding components, sculpting, converting and so on. Now, I love all that, but many do not. For those folks, these guys are the very thing. Even with my love of conversion, a ready-to-paint specialist like our flamer-toting friend above is too much to resist. There are several special and heavy weapons available. Like most Malignancy models, this guy is pleasantly chunky, and a nice clean cast. They are larger than you expect, in a good way. A huge amount of miniatures now are designed with 3d packages, and many are indeed technically excellent, this guy has the hand-sculpted individuality and charm which is so common in so many sculpts of the 1980s, and so rings my bell.

This host is much the same as the flamer, clean and well cast. None of the models in the images are cleaned up, they are straight out of the pack. I like the masks they are wearing too, more common on the 2nd wave Malignancy releases.

Next up, the Malignancy infested Og. This guy is big. You could pour him into a sock and cosh someone to death with him, no trouble. It's a 40mm base for this guy at least. Anything less than that and it's topple time. Again, a nice clean sculpt with very little cleanup. I would recommend pinning the hell out of him though, and maybe painting the gun separately. There are three head options, one hooded and masked and two hooded. The hooded heads remind me of medieval grotesques. I'm going to have a lot of fun painting those faces.

I like the idea of infested Ogs, it gives the Malignancy some big guys, and something new and interesting for cult players. Here's a scale shot with a Primogen.

Finally we have two Primogen Hosts, the middle management of the Malignancy. These aren't new releases, but I hadn't reviewed them before, so here they are. They make good squad leaders, or could even function as the elusive Hierarch in a genestealer cult. Once again, they are clean casts with lots of nice detail. Bags, pouches, canteens, chitin covered third arm...

So, for devotees of the cult we have such rarities as leaders, specialists and hulking infected abhumans. For Malignancy players a growing range of horrific alien-infested nutters. Initially I was interested in this range for my own genestealer cult, but as they variety of models increases I am getting more and more curious about the Macrocosm universe and rule system, which is free, I might add.

If you're intrigued, give the Macrocosm Kickstarter a look, there's never been a better time get some Macrocosm goodies for the Malignancy, the Diggers, or the new factions, the 3rd Race (mech battlesuits) or the Grem (well-equipped and very serious greenskins).
Posted by Mr Saturday at 5:31 PM 2 comments: Links to this post