Inspired by some mail banter this morning, I've decided to post up some thoughts on movement trays. I don't think I've covered this before, but if I have, sure, what the hell, it's not like it'll be on the news.

Anyway. When I were a lad movement trays were a bit of cardboard painted green and that was that. Times moved on, and a few years back I thought I was spoiled with being able to order custom laser- cut trays, which I would then add some basing to fit with my army theme. A bit of work, but they added to the visual appeal of the army no end.

These are still a good option depending on how detailed you want your army trays to be. I've seen these just painted black to match the sides of bases, and they looked great. There's a pile of companies that do this. I used to use Litko for these, but there's plenty of others like Back to Base-ix. The variety is huge, from regular trays skirmish trays, trays for round based models so they can be used in regiments for square base games and loads of others. Truly our movement tray cup runneth over.


Games Workshop do modular trays as well for those who want to make their trays themselves, but I haven't used them myself. My current thing is resin movement trays, I love them. There's generally no assembly, and the really do look great. I use the trays from Base-X-of-War. Don't be put off by the pretty terrible website, they have a huge variety of resin bases and movement trays, and will make custom size trays if you wish. They will also add metal foil to the tray for a little extra, which is super handy. Prices are very reasonable.

Other companies such as Microart Studios do these trays as well, though they are at set sizes and there isn't as much variety. I'm not aware of any other companies that do them yet, but I'm sure they are out there.

Now, onto the gaming end of things. Obviously trays are needed to move your troops around, but there's a bit of debate on how ostentatious they should be. Personally speaking I think the resin trays I use are at the upper end of elaborate, but they don't interfere with the game. I always measure from the models, not the tray, which seems obvious but can be an issue if folks forget, or measure from one or the other depending on what the situation is. Most players are decent though, so it's not a massive issue.

It's possible to go over the top with trays, but in Warhammer, as long as your trays allow your units to get to within an inch of each other when in the tray I think that's a pretty good guide. Good trays really add to the aesthetic, theme and consistency of the army and if you're into your painting they are well worth making the effort on.
Posted by Mr Saturday at 12:00 PM 12 comments:

Email ThisBlogThis!Share to TwitterShare to FacebookShare to Pinterest
Labels: Modelling 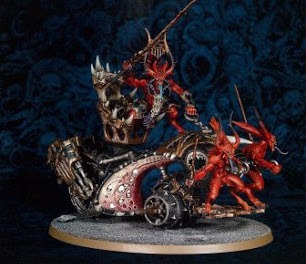 It seems the Warp gates are up to eleven of late, as hot on the heels of the warriors of chaos release is the new daemons release, and not only that, a dual warhammer/40k release. It did feel there was a bit of a chaos bottleneck building up at GW, but the floodgates of chaos are well and truly open now. There must be one hell of a release schedule this year if they are pumping out so many new army books and codex in such a short time span. To this I say... splendid.

I'm still mulling over the new warriors releases. Whether to add a chimera, what combination to use on my daemon prince, what brand of deodorant to buy the Nurgle warriors, and lo, a platter of new daemon releases. There looks to be a pile of new units, from the Khorne cannon thing (it looks like some kind of demonic Harley to me, which I guess is appropriate) to the Nurgle fly riders. Not sold on the fly bearers at first glance, but then, as folks say, wait until one sees them in the flesh. Flying monstrous beasts/cavalry though, that's scary. I see they are not on the 50x75 bases, what's going on there?

The upshot though, is a new daemons book. This will upset the warhammer apple-cart no end. Daemons may not be the school bullies they once were, but they're still top tier. It'll be very interesting to see the new rules.

Thanks to Dice and Brush for the images. 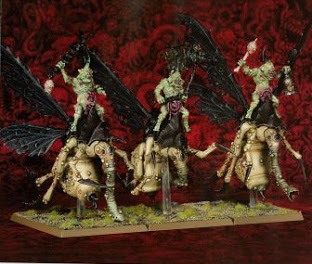 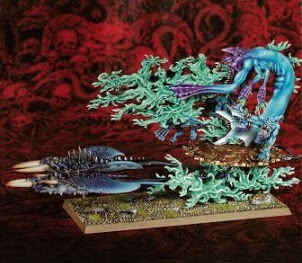 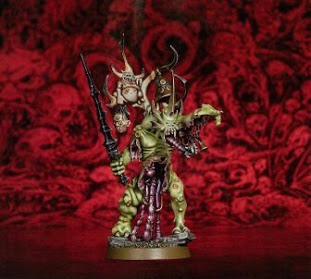 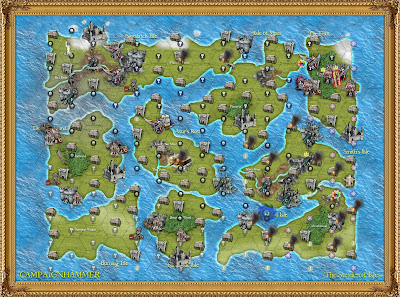 I've been taking part in a long-running warhammer campaign which has been running now since October 2011. You can see it here, we've blogged the whole thing. We started with eight players. Currently there are four left, the Dwarves, Vampires, Bretonnians and the Warriors of Chaos. We're seven years in in campaign time, and it's been a blast. I do love my warhammer, but when you're gotten the added background and context of a campaign game, it can really up the ante.

Two of the biggest problems with campaigns as far as I can see are getting games played and running out of steam. We seem to have solved both issues. Games that can reasonably be played on the tabletop are preferred, but when people just can't make it the GM rolls off using the old Mighty Empires rule, and this has worked well. On that note, having a non-playing GM is pretty much mandatory. We've been very lucky to have someone willing to make all the rolls, harass people for orders, send out fluff and all the rest.

Running out of steam is the other biggie. We're playing until there's a certain amount of victory conditions met, but another way to do it would be a time limit, perhaps five or six years. You have to have committed players, but a definite end point gives people something to aim towards.

The other thing you need is somewhat thick skin, certainly in the company I keep. My gaming group are notorious backstabbers, evidenced by my former allies the dwarves and bretonnians combining forces to give me the shaft this turn, as you can see above. I'm the vampire player. This will result in my next tabletop games against them being somewhat coloured by a barely controlled need to enact painful and over the top revenge upon them. I live for this kind of gaming, not just a simple warhammer game, but part of an ongoing story where you get emotionally entangled.

Email ThisBlogThis!Share to TwitterShare to FacebookShare to Pinterest
Labels: Campaigns

I tried to resist.

I said to myself, stay on target, get the movement tray painted for the half-dead, that's the respoinsible thing to do. It's not like they're even that great, look, nobody is taking them! They must suck.

But, I couldn't. I'm literally agog with the need to assemble a unit of fimir Warped Ones, or as the rest of the world will know them, warriors of chaos forsaken. I love the forsaken kit, though many do not. There are so many bits in there, it's a converter's dream. I now aim to but these bits to use on a new unit of warp spasming fimir warriors. Worry not though, I'm not parking the half-dead painting, merely converting the odd warping fimir along the way. 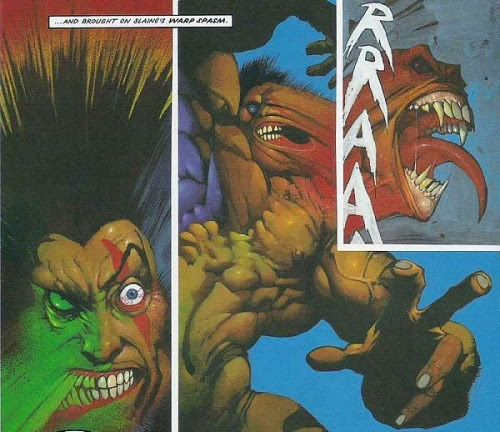 Anyone familiar with Sláine will know about warp spasms. I'm hoping to add a hero harness to each fimm, but for the life of me I don't know what way to model it. The other idea is to have a shard of leystone hanging around their neck, or shoved though a skin flap. I think I'll do two fillers based on chaos spawn for fimm who are warping out, and in a unit of eighteen that means two warp-out fillers and ten warpers.


I mocked up the first lad using the old chaos mutation sprue, I have a bunch of these, I knew they'd come in handy someday. He needs a leystone/harness added yet.

So, warped ones, what say ye?


Today for my wistful stroll through the meadows of hobby, I shall deliver my opinion of display boards onto you.

I like display boards. There, my hat is in the proverbial ring. I really don't understand why some people take against them in such a vitriolic fashion. 'They're not needed!' I hear. Well, no, but then, neither are nicely painted models and swanky basing and themed armies or yadda yadda. 'They're only for w*nkers who want to show off!' you cry. Well, that could be said about any really well painted or converted army. True, not everyone has the skills to pull off an amazing display board, but you don't see people running up to folks with nicely painted armies and punching them in the jaw. You don't see that with display boards either, but you get the idea.


Display boards seem to be a bigger deal in the States. I've not seen too many in Ireland, but I think it is a great idea. What could be wrong with an impressive army set out on an impressive board? What? What's wrong?!

I certainly plan on making one when I get to the point of having enough army to fill one up. It's handy in tournaments, it makes your army look supa-cool and it can be used as an emergency time travel device.