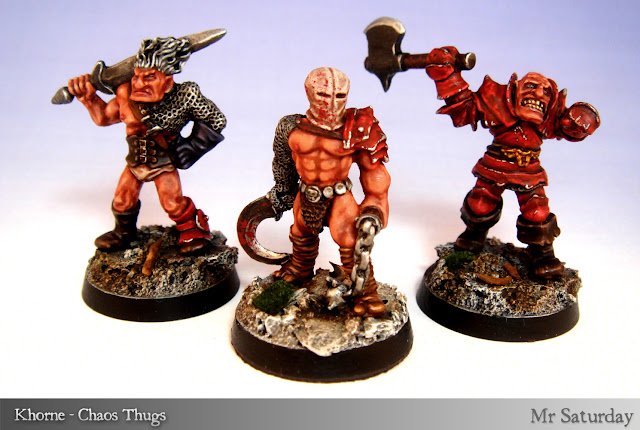 I've been perusing Age of Sigmar again lately, especially the skirmish variant. My early reticence gave way to curiousity about how it holds up as a skirmish ruleset, and as supplements like the General's Handbook and Skirmish were released this built up into an idea it might be something worth trying. I still have fond memories of the Realms of Chaos warbands, and the Paths to Glory rules looked good for assembling some cool warbands once again. Added to that others such as Cheetor were going to give it a go, so what the hell, I was in.

Up until last week I hadn't actually played it though.We were somewhat spoiled, playing on Cheetor's wonderful new AoS terrain (more on his blog). We tried a skirmish scenario and then a Triumph and Treachery one. Both offered plenty of action and laughs, which ticks my boxes for a game. After popping my AoS skirmish cherry I've decided it's just the kind of ruleset that I can get behind for these kinds of casual games. Added to this there's a pretty big toolbox for gaming you can draw on.

So, thus committed, I've decided to give my Gorechosen slaughterpriest some mates, and build me a warband for the blood God. I started with some chaos thugs. 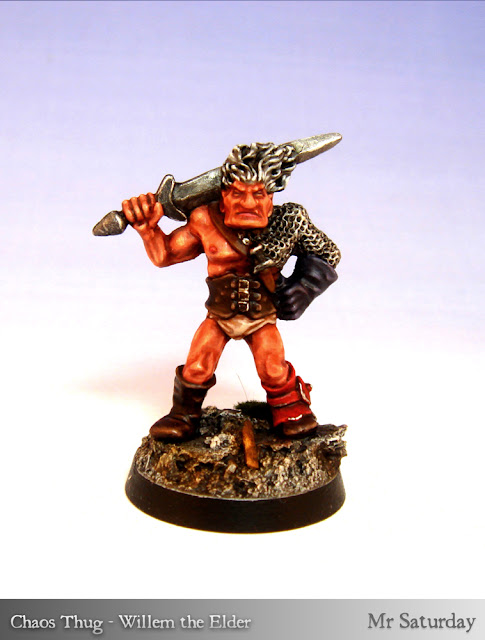 Chaos Thugs. I can't tell you how much I love chaos thugs. I collect as many as I can. I rummaged through my tubs and found some semi-naked/insane nutters that might compliment the huge haemo-erotic (not my invention, good though eh?) Khorne boys from the Age of Sigmar range.

This guy above, well. You know how you only REALLY look at the detail on a miniature as you begin painting it? You notice things, especially on chaos models. I shant forget spying the assless plate mail on that Slaanesh warrior in a hurry. Anyway, this guy, he looked, well, old. An old thug. Like a snowflake in death valley. He has a corset and what looks like an adult nappy on. I imagined him at the thug reunion. All his mates are: A:Dead B:Warlords or C:Daemon princes. Awkward. Good enough to stay alive, but not good enough to get granted the extended lifespan the chaos Gods seem to dole out like candy. He also, as was spotted by a mate, looks like the guy from UP. So he got painted as an old bloke. He'll provide much hilarity in games I imagine. 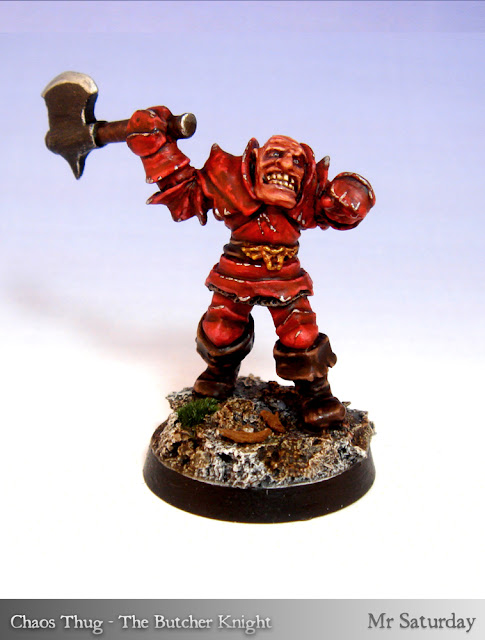 This lad is more straightforward. I picked him for the axe and the gurning madness in his face. He probably pees in that armour. While looking you right in the eyes.

So, I am having fun with these. Models I've had sequestered away for decades are suddenly primed and ready for paint. Bloodletters, flesh hounds, Khornegor (proper dog-faced Khornegor, none of that goat stuff) as well as the fat bloke with the whip from the AoS range. If it pleases Mr Blood, I may expand the warband to a Paths to Glory force. Or I may see what Tzeentch offers. Such is the fun of the tiered rules for Age of Sigmar. Who knew? 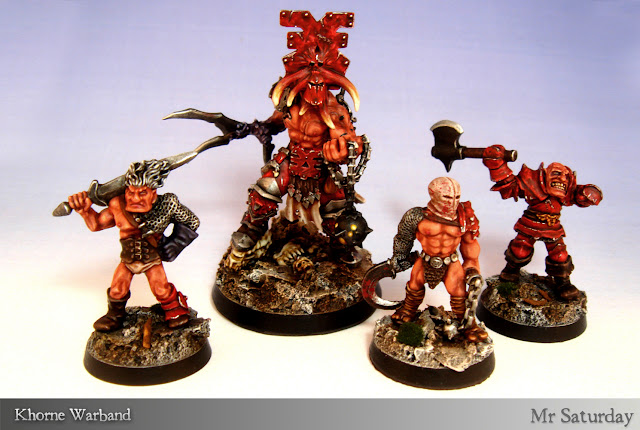 Now, hold on. I know what you're thinking. 'Look at that HUGE bastard! Scale creeporama!' Well, (pushes glasses up nose) ACTUALLY the slaughterpriests are meant to be larger than other mortals. So there. The plastic reavers are only about a head taller than the old thugs, which means balls to me. Once they are propped up on a bit of cork there's nothing in it. So I wouldn't be overly worried about scale. Humans come in all sizes etc.
Posted by Mr Saturday at 4:26 PM 17 comments: