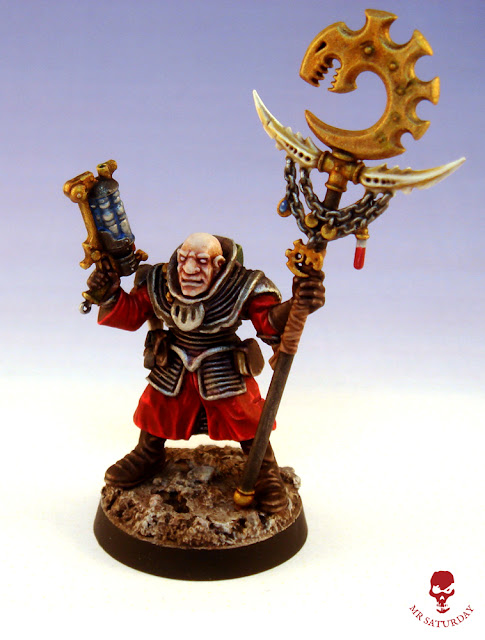 Looking positively dashing in his ascendance day finery, Rauss Arnatt, neophyte of the Kabeiri, raises his icon for his brethren to cheer and whoop at. Arnatt is feeling good, and he's sure the magus gave him a little wink earlier.

A neophyte icon bearer is a super useful addition to my cult, usable in Warhammer 40k, Necromunda and Kill Team.

These days there is a huge store of bits available for the genestealer cult fan. Once, arming up the old Bob Olley hybrids might have been a chore, but no longer. They fit suspiciously well on most of the vintage boys. This particular, rather beefy 4th generation hybrid is one I think well suited to hefting a big heavy cult icon, and I've wanted to paint this one for a while. After some consideration I gave him a nice big phosphor blast pistol, which also fits neatly with the adeptus mechanicus flavour of the Kabeiri. He should be carrying an autogun or shotgun, but rule of cool won out. 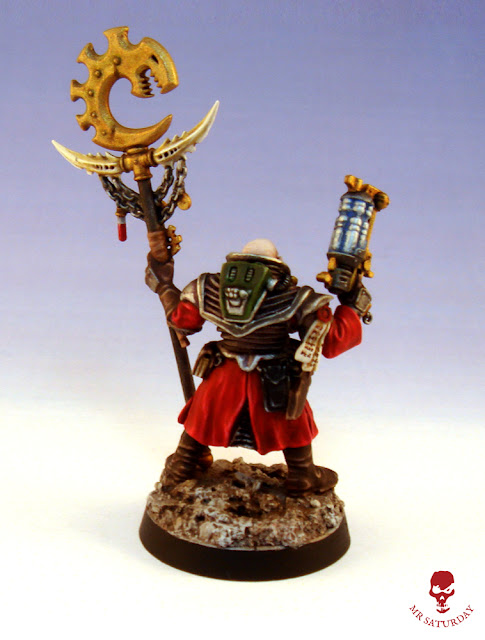 It took a fair bit of sanding and cutting down on the arms to allow for his unusually wide shoulders. Even so, he's still very broad. I'm okay with that as he's meant to be a bit beefcake. As with many Olley sculpts, his face was a delight to paint. I do love painting faces.

With Arnatt done, I have two more minis to paint to finish my Kill Team squad. A purestrain, which is halfway there, and a neophyte with a heavy stubber. The heavy stubber can also go toward getting my neophyte squad up to ten models. Utility!