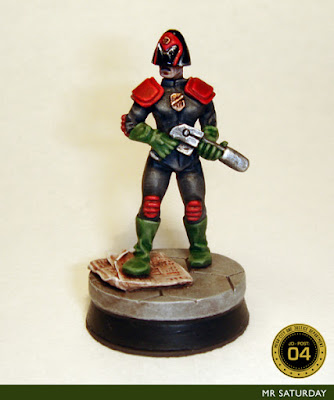 Judge Lagransky is my entry for Judgement Day number four. He and judge Kariyev can now dispense Sov-style justice to the weak Imperialists of Mega City One twice as fast.

Now that I have my scheme tied down for painting the Sov judges, he was pretty straightforward. Initially I'm hoping to keep adding Sovs until I have a group ready for both the Judge Dredd miniatures game and Pulp Alley. Such a group will be very satisfying to have on the gaming table I can tell you.

With two street judges done, it's now time to turn to something a little heavier to give these boys some support. Next week Judgement Day continues on Sho3box. Set your clocks!

BY YOUR COMMAND - Crooked Dice Cylon

If, like me, you grew up on a heady diet of shiny 70s and 80s sci-fi, you'll know why I enjoyed painting this so much. Cylons were off the charts on the cool scale, and I still can't decide who would win if a cylon centurion and a stormtrooper had a bare knuckle fight. So when Crooked Dice released this set of 'Mrk2 Argonauts' at Salute, I was all in. ALL IN.

I bought a squad on ten, 9 cylons and a centurion. There are three armed poses and two unarmed poses, for when the cylon is out at a bar or something. (My centurion will be one of these. He don't even need a gun to mess you up.) They are clean sculpts, requiring minimal cleanup and come with 2 head options. The cylon one, and argonaut one.

The scheme was super simple. Ultra shiny armour and black everything else. The armour is GW chainmail washed with 1:1 Lahmian medium and Nuln Oil. The chrome effect meant I couldn't darken the armour too much. Wash neat Nuln Oil into the recesses. Hit it with a heavy overbrush of Necron Compound, then Mithril Silver. Finally, gloss varnish the hell out of it. The black areas were wet blended up to pure white.

I intend to use these as a Pulp Alley league, so I need to tell them apart. I painted a faint A on his base, as he is trooper Alpha. Now I need to find Baltar, and some of those crazy disco-faced robots who gave the orders to the centurions with such eloquence.

Now get down to some cylon tunes.

With another batch of Malignancy troops from Macrocosm hitting my welcome mat, I thought another close look at these shiny new fellows was in order. There are three packs this time, the Malformed Renegades, gatling gun team and missile launcher team. First up, lets take a look at the missile team. 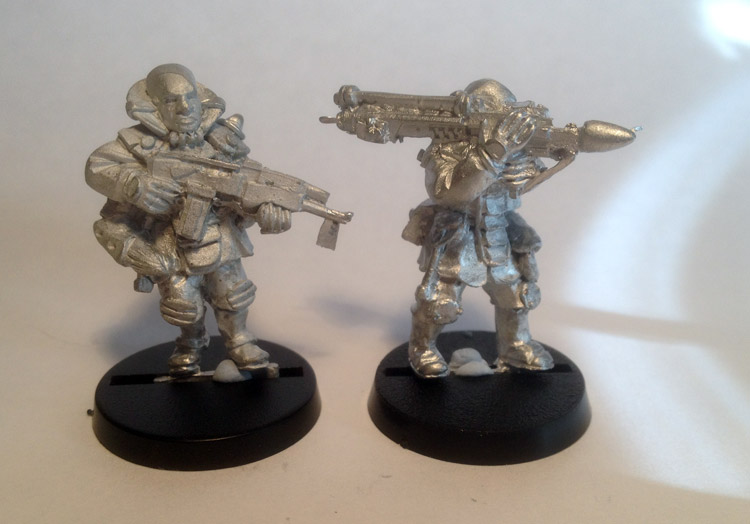 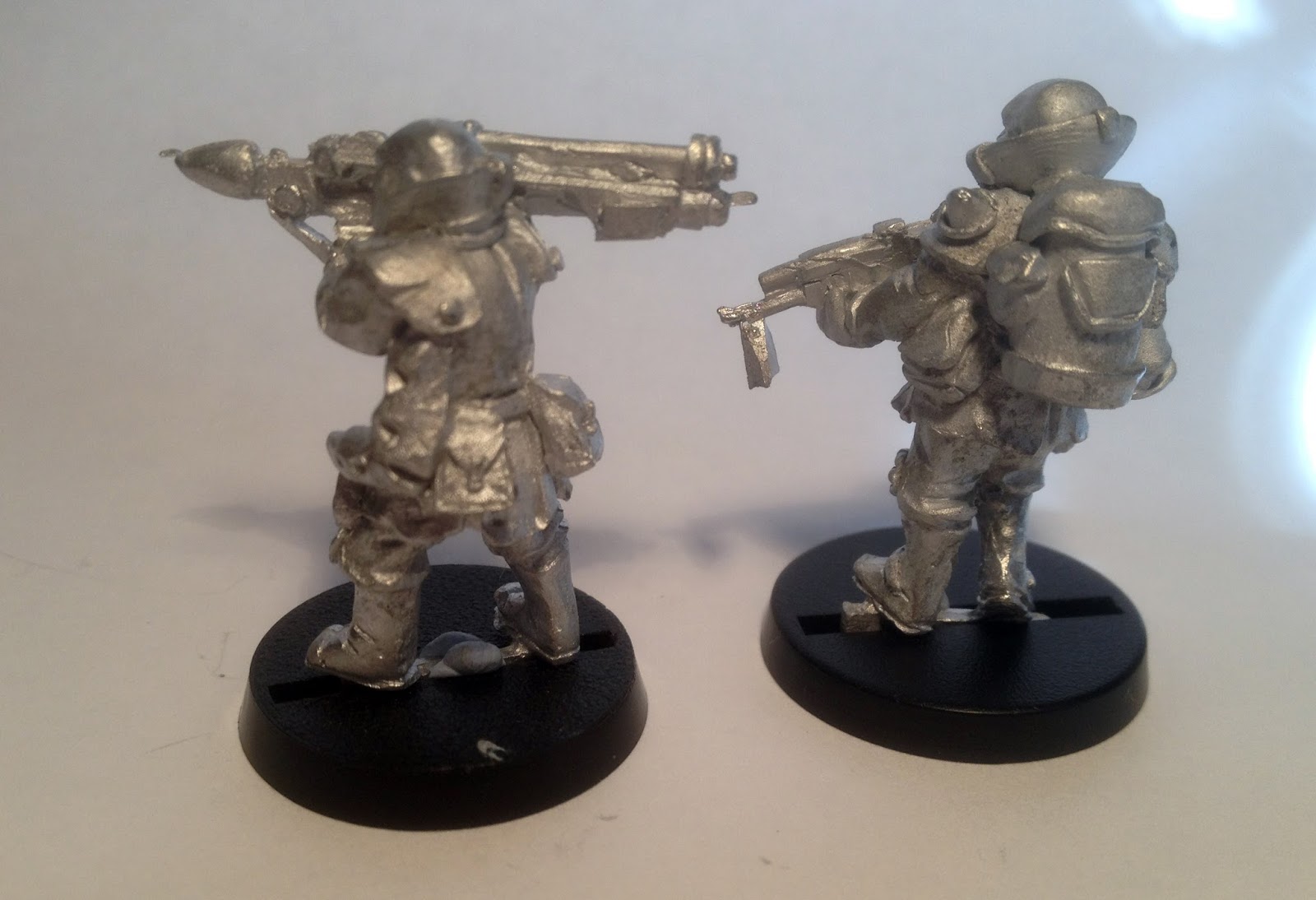 These are raw models with no cleanup. As you can see, they are pretty clean. There are no major flash lines to speak of. My favourite thing about this range is that they are pleasantly chunky. They have a nice heft to them. The detailing on both is very nice, and offers plenty of scope for the painter to got to town. The host with the backpack is probably my favourite model from the entire range. He has a great face, and carries that gun like he really means to shoot you with it. The weapons are again, very near future, which I like. For my own purposes, this pack offers me that holy grail, special weapon hybrids for my genestealer cult.

Next up, the gatling team. 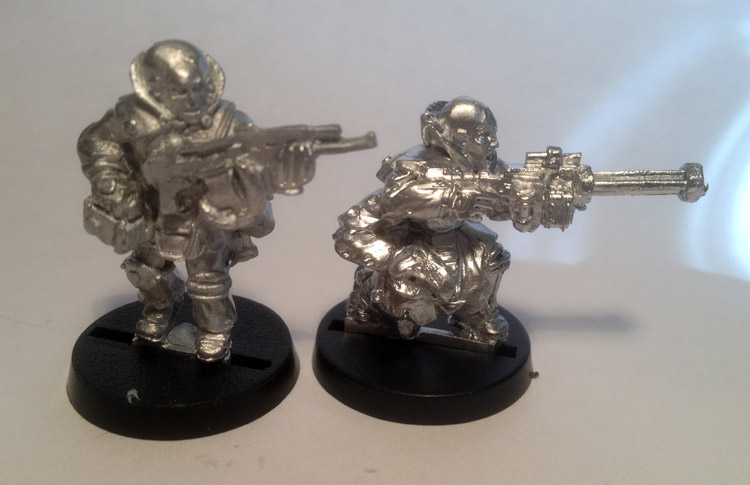 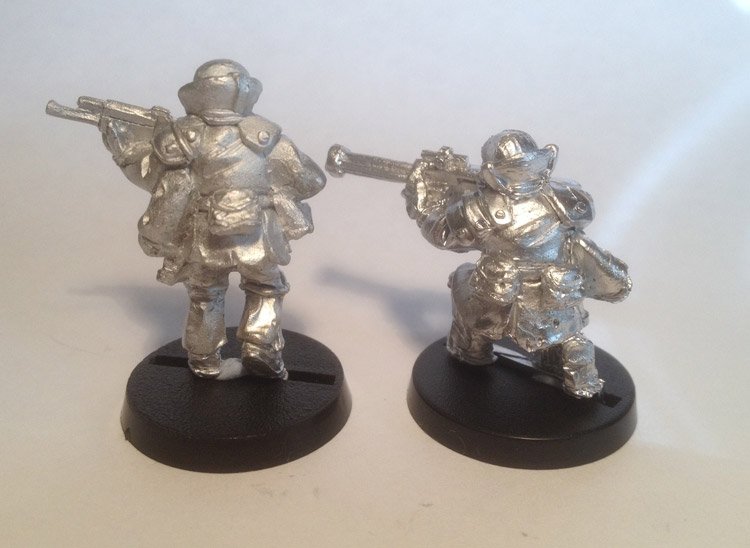 Much the same as the missile team. Clean crisp sculpts with lots of nice little detail. The gatling carrier has a great pose. I'd be putting some rubble or the remnants of a wall on his base for him to fire over. The carrier with the ammo box is also well done as it looks like there's some weight to his gear, I like the third claw arm holding up the gun while he lugs the ammo with his free hand. Sometimes it pays to be hideously infected I guess. 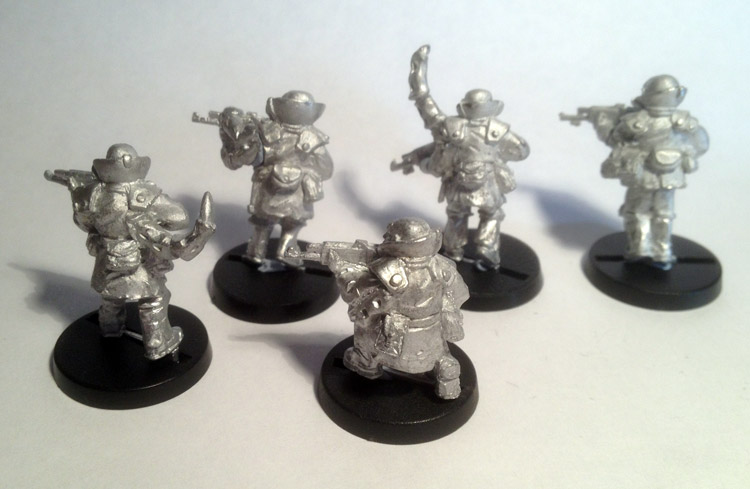 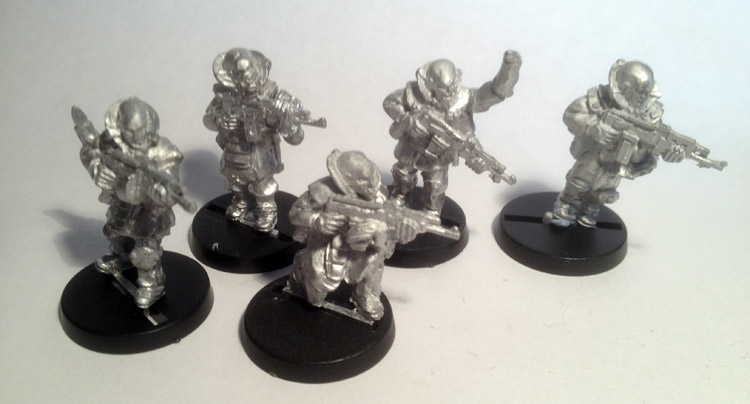 These come in a pack of five. As before, nice clean models. They are all single piece, bar the guy with the rebreather. His gun and arm are a seperate piece, which might be better painted before attaching, but it'll work either way. A great selection of poses, and like the malformed hosts, they look like alien terrorists, so perfect. More manna from heaven for genestealer cult players, and easily my favourite faction from Macrocosm. There's something horrible about the fact these guys will all inevitably explode in a horrific shower of gore as the infection reaches it's height. Eurgh.

So there you go. If you fancy giving Macrocosm a go you can find the site here. If you're after bodies for your genestealer cult, look no further. With more releases for the Malignancy coming down the line, it's a good time for horribly disfigured alien-infected nutters of all ilks.
Posted by Mr Saturday at 9:31 PM No comments:

This week we have the first of what I'm hoping will be a growing faction. An East Meg 1 judge, we'll call him Judge Kariyev. I'm a big fan of the Apocalypse War series, and I do love the look of the East Meg judges. I'm hoping he will soon be joined by some further comrades, all determined to weed out the weakling judges of Mega City 1 and install a more... ordered... rule. 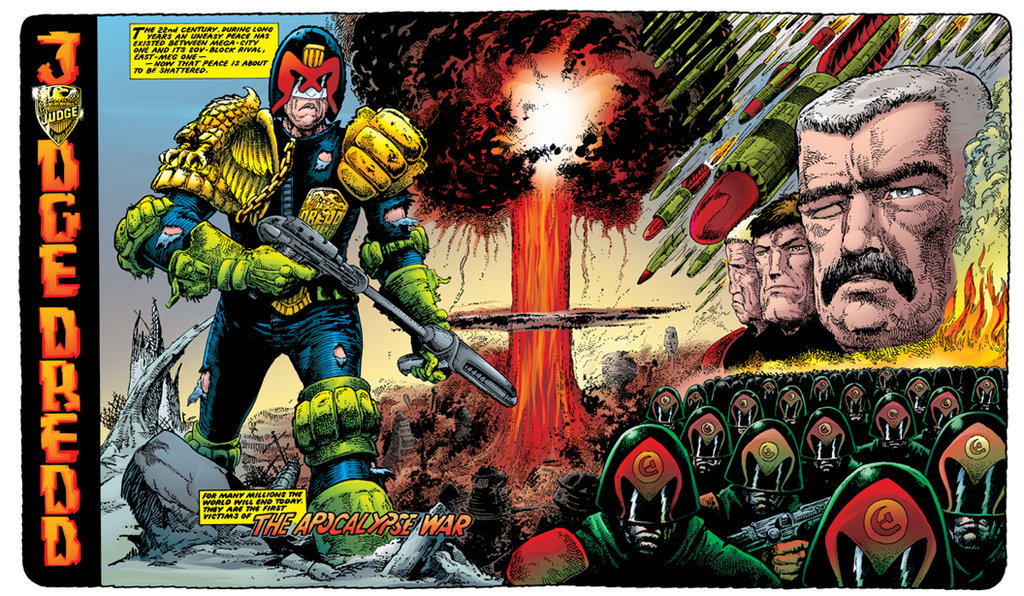 This fellow is a Warlord/Mongoose model. He was quite a clean sculpt, needing only very minor cleanup. I re-posed his legs and head slightly to give him a slightly more dynamic post as he steps off the sidewalk. Paint-wise I kept pretty close to the standard sov uniform, which I'm pretty happy with. You be the judge! (See what I did there?)

Next week it's over to Cheetor at Sho3box for the next installment of Judgement Day.

As to the Mumblings, in my off week I plan to work on something more in this vein.