A new chaos dwarf models pops up in this month's White Dwarf, the bull centaur Taur'uk. I must say, I wasn't overly enamoured with the bull centaurs, as nice as they were, when they first popped up, but over time I've come to like them more, especially after seeing Ben Curry's unit for his new chaos dwarf army. This guy, I like right off the bat. Nice armour, especially the gorget. Good pose too, he's a keeper. I may pick up a few of these guys yet. 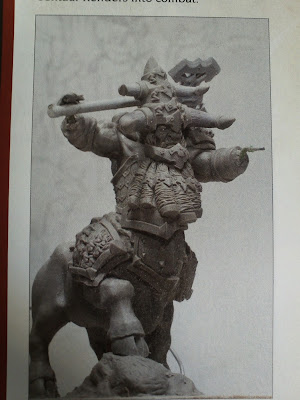 I've recently been looking for a company that will make custom acrylic counters for my fimir army to represent the many and various effects that can befall them during a game, as in the heat of battle I can often forget anything and everything up to and including my name and where I am. I had considered Litko, but their custom counters are pretty expensive, though the variety is huge.

Conveniently enough, I got a tip off today of a company that does exactly what I wanted, Warbases. They will make counters in a variety of shapes and colours with custom text, and for only €0.35 a counter. Perfecto, that's me sorted.

I was perusing the rest of the site, and it turns out to be a little gaming accessory treasure trove. Laser cut buildings at much cheapness, bases, movement trays, shield sets and a pile of other bits and pieces. Very useful stuff indeed. One upcoming thing did catch my eye, and that was the boats they have coming up soon. 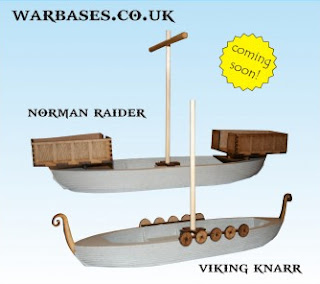 They look pretty good even from this wee preview, especially if the pricing is in line with the buildings. It's pretty hard to get decent boats that don't cost a bomb in 28mm. I'm very much looking forward to the Viking knarr for a few reasons. In the background I'm following for the fimir, they use black longships to raid the coasts and river-sides, and I'd love to have one for a raid scenario. Even as a piece of custom terrain they would rock. I've also always fancied a bit of naval warhammer at 28mm, and these would be the job. Added to that, I'm getting very interested in SAGA, and these would be the ticket for a raiding force of Vikings or Normans. I'll be waiting for the release of these lads with considerable relish.
Posted by Mr Saturday at 4:51 PM 1 comment:

Email ThisBlogThis!Share to TwitterShare to FacebookShare to Pinterest
Labels: Review

The hobby net has been alive with the news that legendary miniature sculptor Kev "Goblinmaster" Adams was attacked during a burglary on his home. He was badly beaten, and while his injuries are extensive he has been discharged from hospital. He will need  some re-constructive surgery on his face however.

The gaming community has responded by setting up the Goblinaid Facebook page here, with a message from the man himself. Kev Adams is one of the great miniature designers, and has contributed an immense amount to our hobby, so please do check out the page.
Posted by Mr Saturday at 11:38 AM No comments:

As the fimir project is ticking along nicely now, recently my mind wandered to all the accoutrements I'd like to add to it to keep the theme running. The most obvious one was dice. Having found the appropriate fimir icon I wanted, I contacted The Dice Shop, and they made some snazzy custom dice up for me. 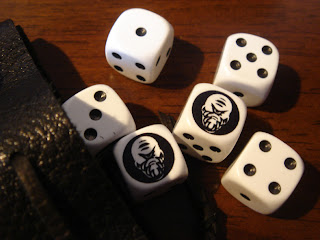 Next up was somewhere to put said dice. I had my eye out for a nice dice bag with something to connect it to the army. I finally found a perfect leather dice bag with a single eye on it at Abbot Hollow Studios on Etsy. Etsy is a dangerous site, and will relieve you of all your money in no time flat. Randy from Abbot Hollow is very accommodating and he is super fast in sending out your stuff. Definitely worth a look for dice bags as well as other leathery goodness. Not cheap, but not crazy expensive either. 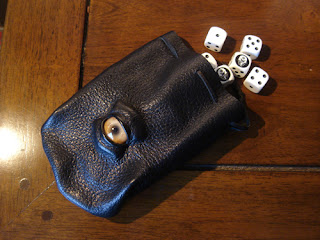 As I use the warriors of chaos list, I'm making some counters to show the effects of the eye of the gods table, forsaken table and all the other tables and effects that can happen in game. They are nice enough, simple laminated prints, but I'm keeping an eye out for someone who makes custom made counters.

There's other ways you can spread the theme of the army to the accessories, the army display board which I talked about recently is an obvious way, as well as custom terrain. Some folks even have little army background sheets that they present with the army when on display at tourneys. One thing strikes me, nobody makes gaming themed tape measures, Games Workshop excepted, and anybody I've missed. Bit of a niche in the market there. Even some kind of cover for a measure themed to the generic races would be cool.

So, how far do you go with adding the extra little accessories to your army? Do you even care? Seems if you go to the trouble of assembling, converting and painting the army, it's a small extra step!
Posted by Mr Saturday at 6:13 PM 10 comments:

Welcome to the first article in the A Tale of Wired Gamers. All the participants have set themselves the goal of building and painting a new army over the next several months. We aim to post every week with our progress but for week one I’ll allow the participants to introduce themselves and their projects.

Recently I threw my hat into the ring and joined the Tale of Wired Gamers on Wargaming Ireland in an effort to keep myself as motivated as possible. I'm still really enjoying putting the fimir army together, but it helps immensely to have the odd external deadline to whup my ass yet further. In addition to this, Wired is an indispensable resource for the Irish wargaming community, and anything to add content is a good idea. There's some great folks in the Tale of Wired Gamers challenge, and it's well worth following to see how it all pans out. Personally, I now have until NWG in September to get the army up to 2,400 points. If I don't make it, it's a one way ticket to shametown.

On that note, the next three half-dead are now on the table. Here's a wip. The musician is one of my favourite members of the unit, with his big Celtic horn. Ahem. There's another eight to go once these lads are done, then it's time for another character.

It's a late one here at the mumblings. Having had a fairly marathon day of modelling and painting with me aould pal Craig of Blog of Grudges, we've settled into the wee hours with a combination of fimir monstrous cavalry construction and dwarf warrior batch painting, which we've helped along with one or two sherries*.

I've managed to finally put together the first of my marlwyrm riders (skullcrushers). I had a devil of a time deciding what kind of saddle arrangement you could put on a worm, finally settling on a rough hide thrown over it's back and pretty much nailed in place. I added some assorted extras to the saddle, mostly taken from ogre sprues. There's so many lovely bits of those sprues, from buckets of guts to a pig water-skin. I had some Celtic-style shields from Scibor one of which finally found a home here too.

Only three more to go... 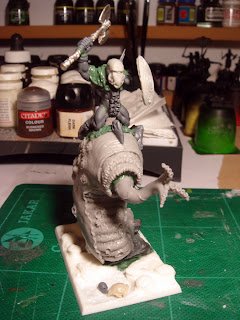 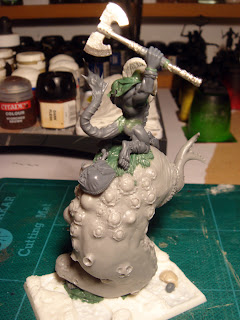 The indefatigable Craig has been churning out great weapon-wielding dwarves, all ready for some dip bar a few bits and bobs. A very productive day, all in all. 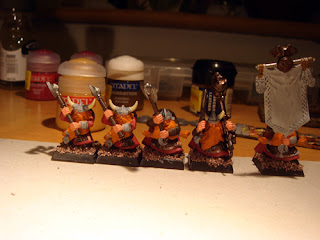 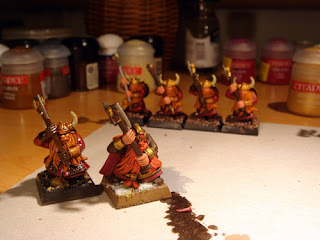 Oldhammer - Bring Out Your Lead 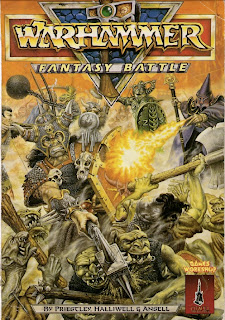 The Oldhammer community are pleased to officially announce Oldhammer - Bring Out Your Lead! (2013). The event is taking place over the weekend of the 31/08/2013 - 01/09/2013, at - Foundry Miniatures in Nottingham.
You can see the full details over at  Somewhere the Tea's Getting Cold, and a great weekend it promises to be. A major hats off to all involved in upping the tempo for the Oldhammer scene! I'm sore tempted to make the trip, all that concentrated Oldhammer goodness in one place might be more than I could bear.
Posted by Mr Saturday at 10:50 AM No comments:

Fimir - Half Dead Update 10, the Slaver

I've spent some time lately with the less glamorous work involved with the army, most notably movement trays. I'm really happy with the resin trays I'm using, they look great, but man, are they boring to paint. They even need tufts, moss pads and water effects added.

Once I was done with the latest tray, I'd nearly turned myself off painting moss, mud and heather for life. I decided a little painting remuneration was in order. I've been looking forward to painting the unit filler for the half dead for a while, the fimm slaver, so I decided he was next up. Ironically, he is on a very detailed base, with an abundance of moss, mud... and... ah... heather. But there were spiders and mushrooms too, so all was well.

Anyhow, here he is! Now I return to painting up some more of his leathery charges. 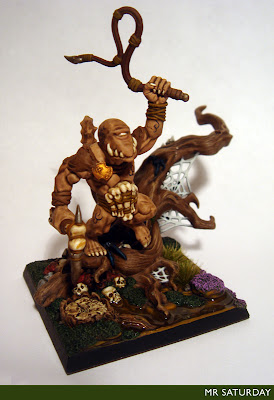 I've had some bits and pieces arrive for the fimir project in the last couple of weeks, which gives me the components I need to assemble some more of the units. I'm still painting unit fillers, so in the meantime I've been mocking up some new models.

Some very old school chaos warhounds for my two hounds units. I originally used Warlord Games Celt mastiffs, but in the end they proved too small, so these guys were my next port of call. Some of them are mutated, but I've worked that into the background, so all is well. They look a lot better than the mastiffs, and I need only one more dog to have two units worth. I've given both units a handler to make them a little more interesting. 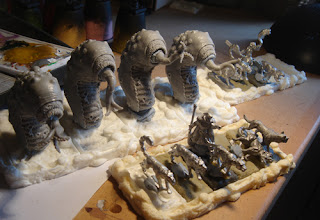 Three more bile worms from Gribbly Miniatures gives me enough to field a unit of four Marlwyrms (count as skullcrushers). The are still riderless, but you can see one mock-up I did for a rider below. I also found some rather nice large Celtic style shields to give the riders some higher standard equipment than the regular fimm. Some new bases and trays from Base-X-of-War complete the haul. 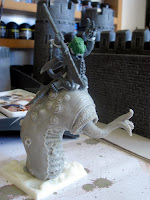 I did also pick up a box of forsaken, and I've been having a great time with the multitude of bits on these sprues to put together more warped ones (count as forsaken). I'm still in two minds about how many of these I want to make, but it'll probably be about eighteen, despite the emerging opinion of running them in small chaff-hunter units. I may learn the hard way here. They're just too much fun to assemble.

There's lots of very useful bits in this kit, from individual pieces of armour, lots of heads, mutated bits, and so on. A great kit to make a variety of chaos units more interesting, or in my case, warp-spasming fimm warriors. 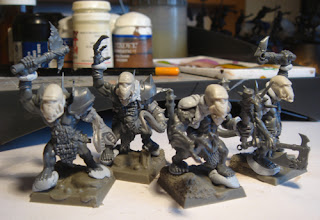