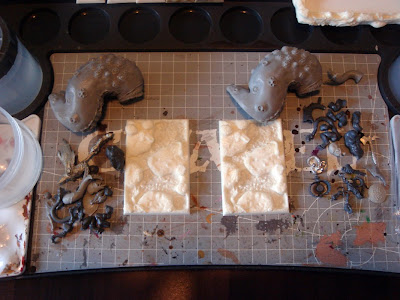 I'm starting the final run toward NWG now, and I'm assembling the last batch of models I need for the army, giving me 2000 points of fimiry goodness. First up are two more marlwyrm riders, the musician and the standard bearer. As you can see, there's a fair few bits for each one. I'm hoping to get a really nice pose on the musician. I found a really good horn (fnar. I guess.) in the ogre bits I picked up a while ago. God bless ogre sprues, they are packed with great stuff. There are some bags, bones and a mantrap from the ogre range there too, for adorning the wyrm's saddles.

I better get the kettle on and the green stuff mixed, it's gonna be a long night...
Posted by Mr Saturday at 8:08 PM No comments: 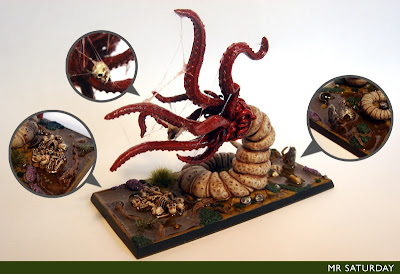 After sitting on my painting desk for some time awaiting his turn, Crom is finally done. He will eventually have a larger base he sits into so he can be used as either a gorebeast chariot or a hellcannon.

I used the same colour scheme on Crom as I used on the marlwyrm. I started using GW bloodletter glaze, recently, starting with this guy. Great stuff. If the other GW glazes are as good I'll be picking them up. I found a slightly better glue to use for drool too, a super cheap glue called Capitol, from the 'just what you need' range. Faster drying and more elastic than UHU, it even allowed me to suspend a skull hanging from several of Crom's tentacles.

Next up, more marlwyrm riders and some war dogs.
Posted by Mr Saturday at 6:35 PM 8 comments:

Passing the Torch - Son of Saturday 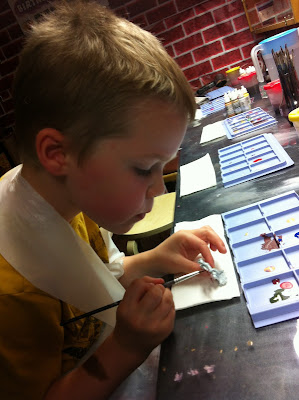 On holidays last week, we came across the town of Macroom in county Cork. As we were nearing the town long dormant Neurons flared into life and the realisation dawned that the Prince August visitors centre was in said town. Casually remarking on this fact in as nonchalant a way as I could muster, I was met with the delightful response of "Why don't we go see it?" and so we were off. Honestly though, my wife did actually suggest it a couple of days earlier but it wasn't something that we thought we'd be in the area for. Thanks to an unexpected fair in Kenmare we ended up changing our route and bingo, hobby bonanza time.

Once we arrived I was met with cabinets of painted minis and every hobbyists fantasy, large piles of blisters and boxes on sale at really low prices. While I was mining the boxed set bin, my eldest was drawn over to watch the demonstration of casting miniatures. I hadn't banked on him being so interested, but he was fascinated. Before I knew it he was casting his own Karoliner Musketeer and making for the painting station. Choosing paints and brushes like a twenty year veteran, he painted up his primed mini with great concentration. Simultaneously taken aback and awash with pride at his ability I had long since abandoned the mini hunt and watched him finish his first mini.

(I still managed to bag some bargains later on. Heh.)
Posted by Mr Saturday at 12:37 PM 9 comments:

If you're like me, you like to take care of your stuff. Especially when it's a limited run type of stuff. It's always galled me that it wasn't possible to get correct size card protectors for those pesky battle magic cards, what with the use they get. GW seem to have made them in a weird size not compatible with any of the existing lines of card sleeves. For those interested, it looks like there is finally a solution. Check it out here:

The warhammer magic cards are 75x110mm, so happy days. They are still on pre-order, but are out at the end of August. 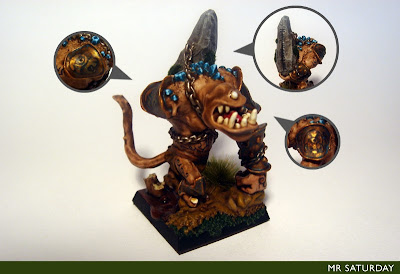 After finishing the first marlworm I thought I'd complete one of the characters for the army, Avagdu. He's been assembled for some while, and it was past time he got some paint. In gaming terms he'll operate as a low level wizard, and as a character I thought those big shoulder pads needed something more, so a bit of Celtic style freehand was in order. I added the name of the meargh who controls Avagdu in ogham to the back of the stone. Yeah? Too much you say? No way I reply.

Now, there's a pile of tentacles that need some red wash...
Posted by Mr Saturday at 9:42 PM 6 comments:

The Warploque Miniatures kickstarter for ArcWorlde has just gone live and is already nearly 200% funded. I've been a fan of Warploque for some time, so I'm definitely in on this. The undead pirates are just wonderful, but most of the Warploque miniatures are great in my opinion. There are four starting warbands with stretch additions added already. The hardback rulebook from what I can see so far looks very pretty, hopefully the contents are as delicious. Worth a look.