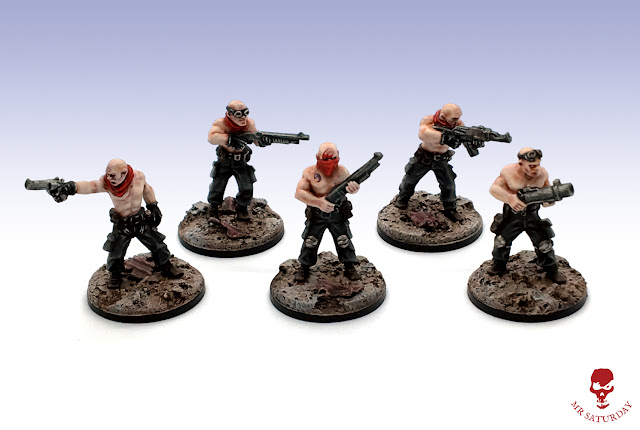 Today the last of installment of my Gaslands project, the neophytes. It's been a very enjoyable project, but the time has come to wrap it up for now. These five eager brethren are the final addition until the 20mm love hits me again.

From Northstar, and sculpted by Mark Copplestone, these bald fellows make for perfect neophytes. They were a joy to paint, as most Copplestones are, being sufficiently detailed, but really easy to read. I gave them my standard genestealer cult colour scheme, and added to my small trio of acolytes, they make for a nice little group of foot sloggers. 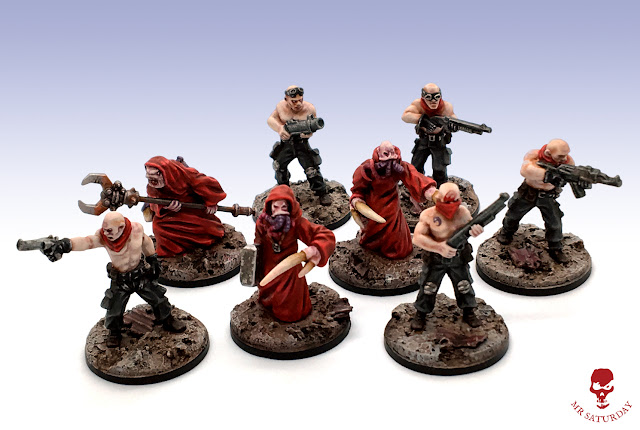 So with these guys completed, I am more than ready for Gaslands fun, once I pick up a few gaming accessories that is. I'll be posting some shots of the complete gang soon, but for now I'll leave you with a photo of part of the gang limbering up for some missionary work. 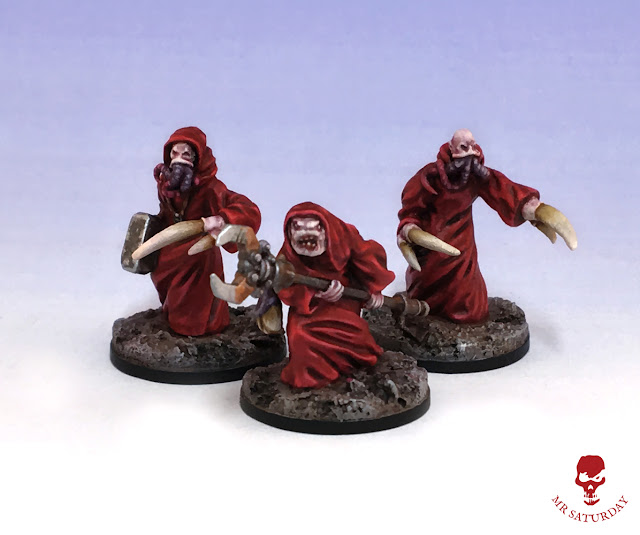 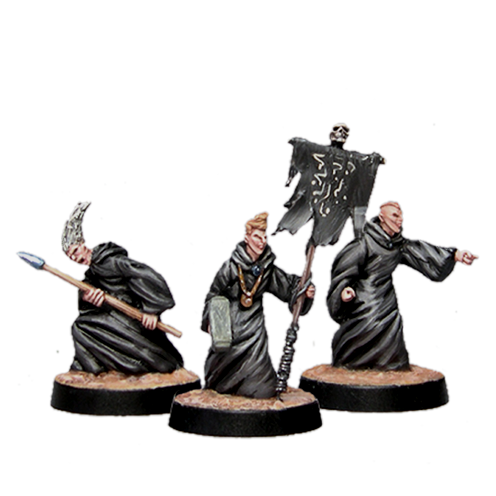 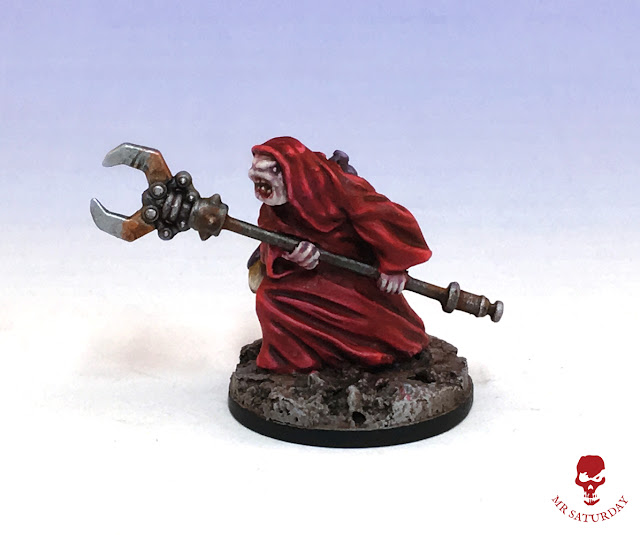 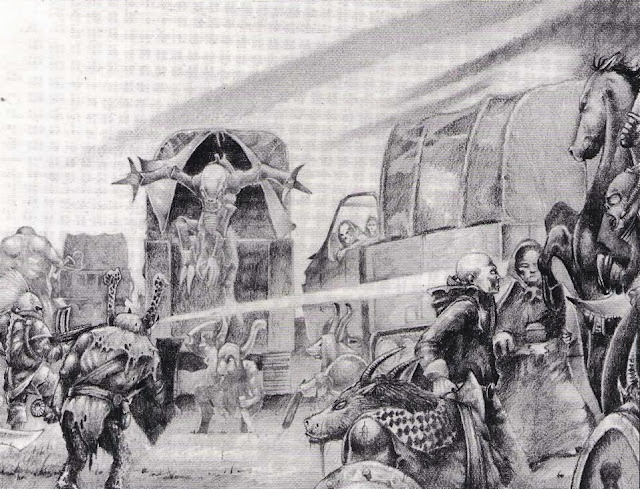 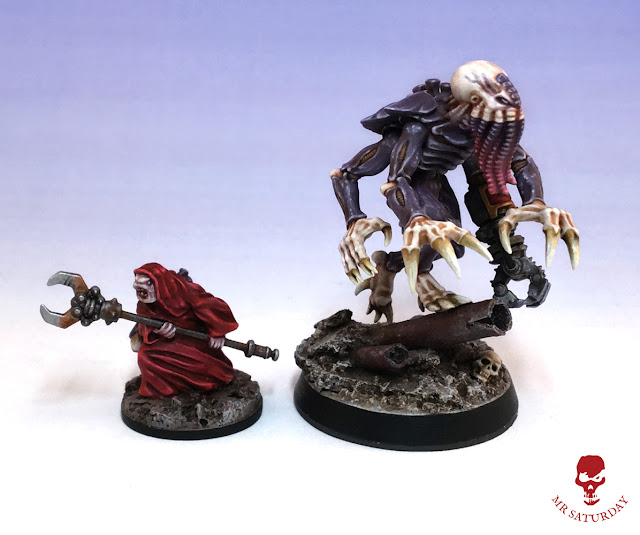 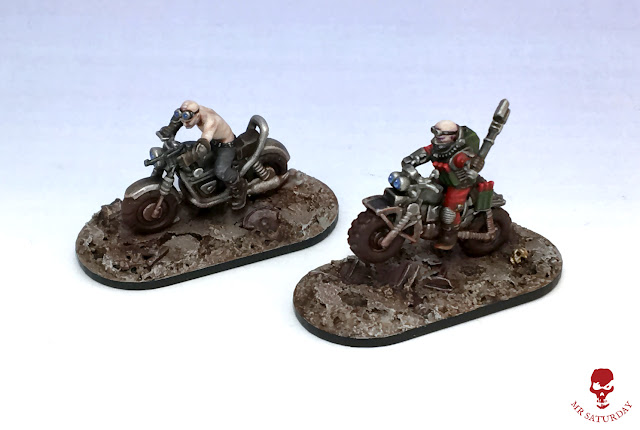 The Gaslands project careens towards completion. The last vehicular additions are these two wee bikers. Kol Venner and Sayben Desh riding Jackal bikes operate as outriders and scouts for the Faithful Sons.

Both of the bikers are 3D prints, graciously sent to me by a pal once I announced I was looking for genecult bikers in 20mm. I mounted them on bases I had left over from my Man O' War project.

This one has an obvious warboy vibe, but suits equally well as a neophyte biker. I painted on some residual brow ridges just to reinforce the genecult theme, as well as  a purplish tinge to his skin.

Kol here is much more obviously a miniature atalan jackal. Where he hails from, I know not, I was just delighted to my hands on him.

With these two outriders, the gang is technically complete. However, I'm going to add some cult members on foot should 20mm cult wargaming opportunities loom at some juncture. 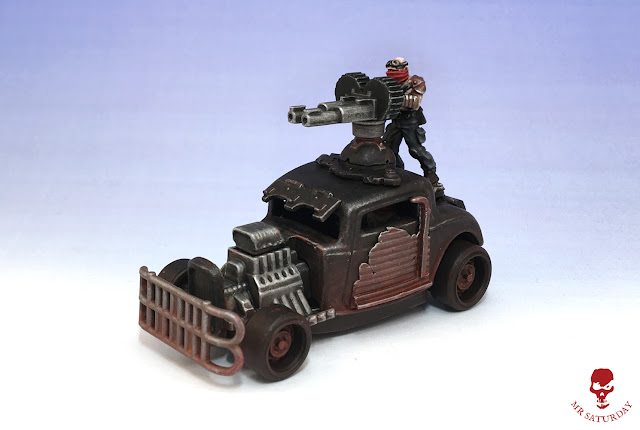 Today we have the last of my vehicles for my Gaslands gang, Little Beast. I wanted to add a buggy to the roster, partly as it's another vehicle type, partly as I like that sweet Northstar gunner and partly because I love this car. It's the only one I bought from a modern range specifically for the gang. 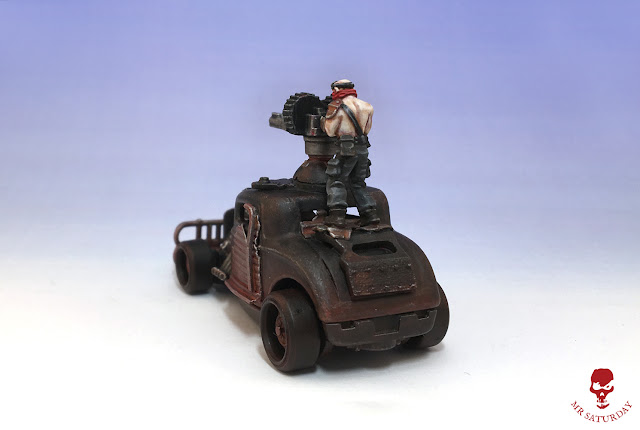 This was the only car I took apart to paint. I drilled out the post once I had consulted YouTube on the matter. Painting it in sections was much easier, and it went back together really easily. I added a driver too, who you totally can't see in these photos, but he's in there, all highlighted up, rarely to be seen by the eyes of humanity.

For parts, I used up more of my Northstar wasteland warriors drivers crew pack, leaving me only one lonely passenger mini. I used another 3D printed gun and some parts from the Implements of Carnage sprue. I have a handy tub of Adeptus Mechanicus parts that are unbelievably handy for odd parts, such as the gun mount and windscreen shield. Some bendy corrugated sheeting for amrour and that was that. 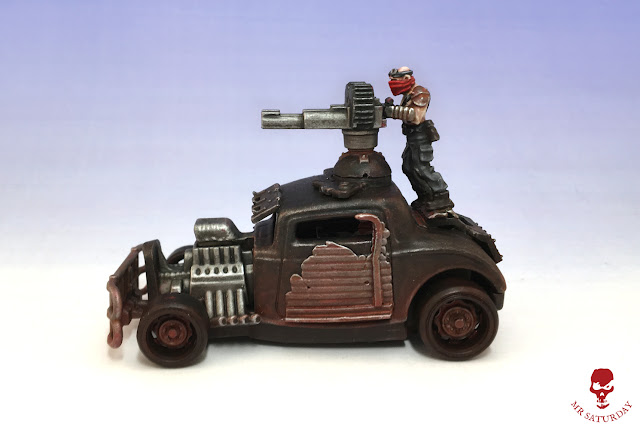 I kept the original wheels this time, as I had run out of alternatives! Still, they look grand. With that, the gang is ready for road, though I am adding some more models, namely a pair of neophytes on bikes. After that, we're looking at some neophytes and acolytes on foot. 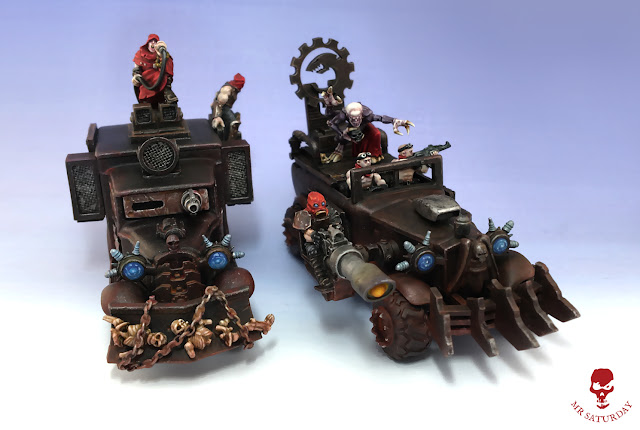 The Gaslands project chugs on. Today I add the main man to the gang, that patriarch himself, on his tricked out limo, The Ophanim.

I wanted a performance car for the gang, and not adding a limo to a genestealer cult Gaslands crew would be a major missed opportunity. Happily I came across an the perfect vintage die-cast car in a €1 tub of similarly unloved cars at a local scale-modeller shop.

Once I'd mutilated the old car, I ferreted about for some tasty parts to make it into a conveyance for the more ostentatious patriarch. A throne made of all sorts of detritus, a nasty ram, assorted do-das and a nice laser cannon. The crew are from Ramshackle, Northstar and Games Workshop (big daddy is in fact a genestealer cult familiar). I love the Northstar wasteland warriors, they make perfect neophytes. I have several prepped for duty as dismounted crew down the road. Down the road. Eh? No? 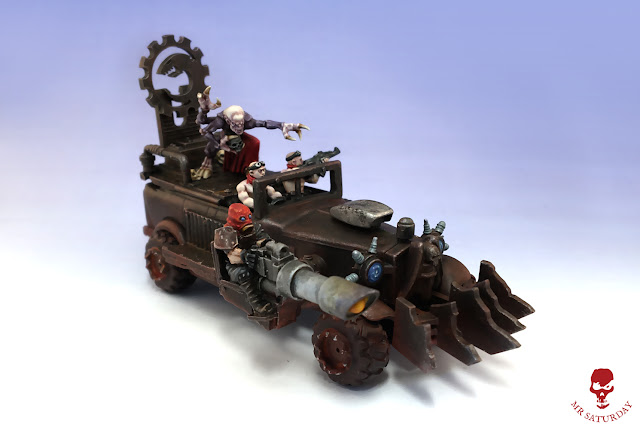 The car was painted up much the same as the rest of the gang, heavyily weathered and with plenty of black contrast paint. I added a little heat damage to the laser and painted up the... lasery bit as if it is hot to add some visual interest. I fear for that crewman's nethers if that thing misfires. 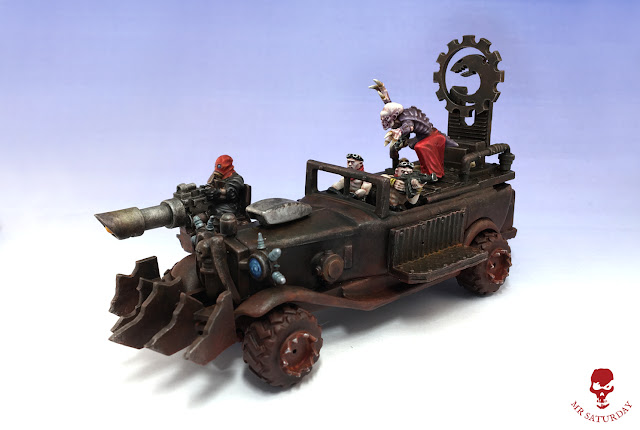 The performance car has two build slots, so I chose the laser and grabber arm. The reason I went for grabber arm is that I wanted something to represent the patriarch's psychic powers as he mentally compels enemy drivers to plough their cars into walls, off bridges and into each other. The arm can change an enemy vehicle's facing, so that works nicely.

With the limo done, I am starting work on the final car of the gang, the buggy.
Posted by Mr Saturday at 3:05 PM 6 comments: 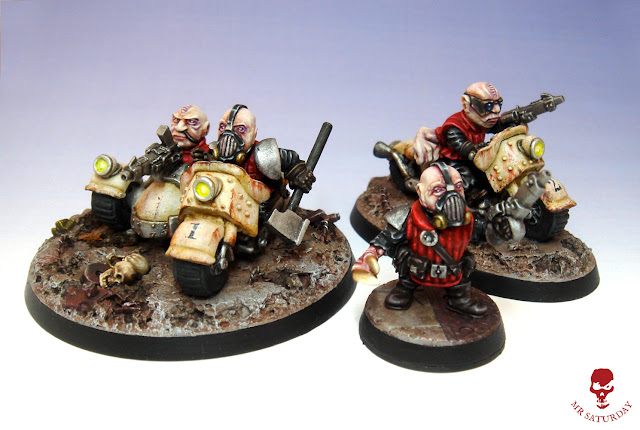 Today, amid the turmoil of the rapidly changing world we now inhabit, I have some rather unusual delights for you. A while ago I became aware of a new project from Macrocosm, some space dwarfs, including bikers. There were parts to convert them into mutants, which look very much like genestealer cult squats, so naturally I was most interested.

Chris from Macrocosm was kind enough to send me a selection, and I set to work. They are modular, so there are a variety of arms, heads, weapons, packs and so on. Along with the number of regular squat parts, there are several hybrid heads along with some mutated arms, and a dedicated hybrid biker body with an extra arm. 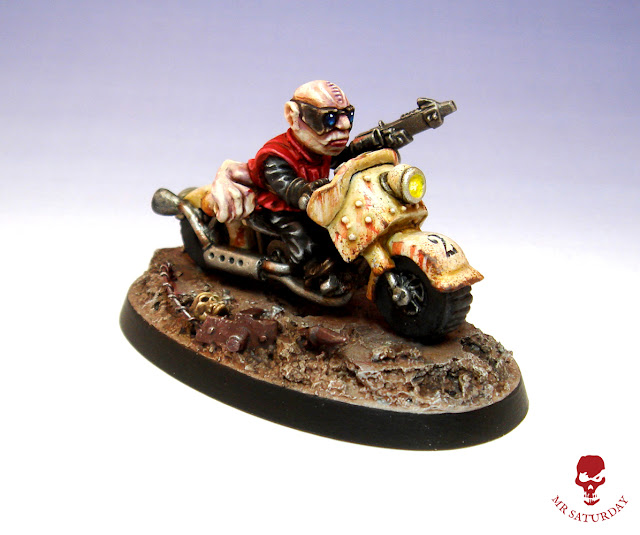 I used that very biker body here, on Dagur Griefkin, Atalan Jackal of the Kabeiri. The set was sculpted by Bob Olley and Alessio Cisbani. I'm quite the fan of both sculptors, and as Bob has sculpted so many genestealer cult minis before they fit in nicely.

The bikes are metal, so have quite a bit of heft to them. I recommend pinning where possible. 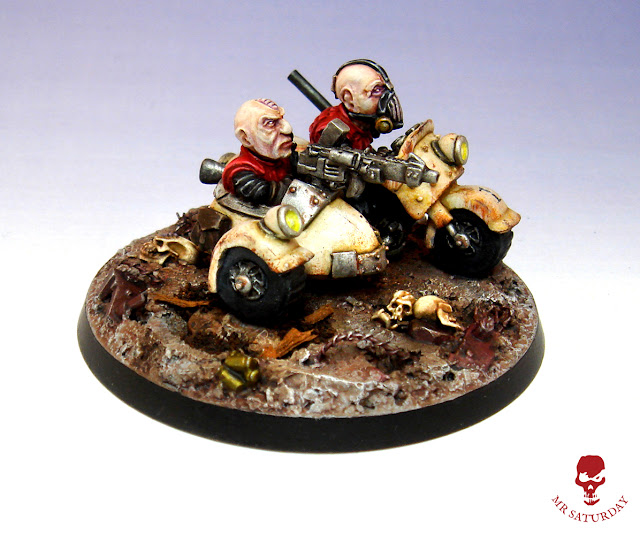 Here we have Baerdal Clawhammer and his gunner, Lythur Griefkin on a Wolftrike. (A very fine proxy for the Atalan Jackal Wolfquad) The trike is a charming mini, perfectly at home in a retro Bob Olley heavy cult. I do recommend painting it in sub-assemblies though. I tested out my scheme for vehicles for the Kabeiri on these bikes, and I'm quite happy with it. I think it'll work well on ridgerunners and goliaths.

The faces on the hybrids were a joy to paint, with lots of nice detail. I used mostly contrast paints on the skin, and essentially washed in all the colour over a Pallid Wych Flesh basecoat, with only one set of highlights over the washes. 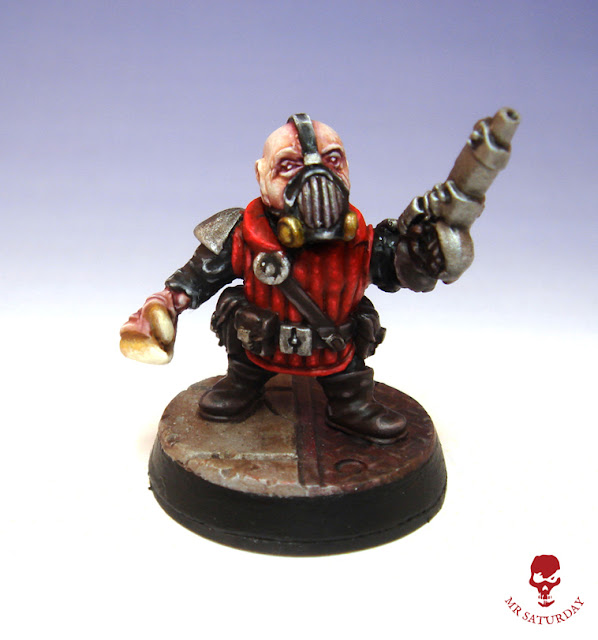 There is also a set of infantry available. So for anyone wanting a nice squad of modular hybrid squats, now's your chance. The claw arm on this guy is a conversion, using the hand from the mutated arm in place of a regular squat hand. There are heavy weapons as well as melee and ranged arm options for these.

So, if you fancy some of these, head over to the kickstarter which is due to start any day now, and see what tickles your fancy.
Posted by Mr Saturday at 3:42 PM 10 comments:

Gaslands - The Joyful Word & The Zealot 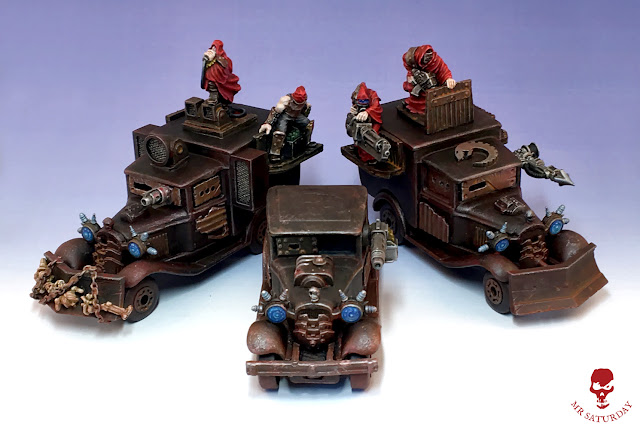 It's been a while, but at long last my next two Gaslands vechicles are ready to roll. Two heavy trucks, The Joyful Word and The Zealot join The Preacher and get the gang up and running proper.

Since I built The Preacher I went on something of a parts ordering spree. The Ramshackle Games ranges were ideal, giving me loads of guns, turrets, rams, armour and some tasty cultist type crew I could have driving and hanging off the various vehicles. Combined with the Gaslands Implements of Carnage sprue from Northstar and some nice 3d printed parts I had enough bits to kit out a number of vehicles. 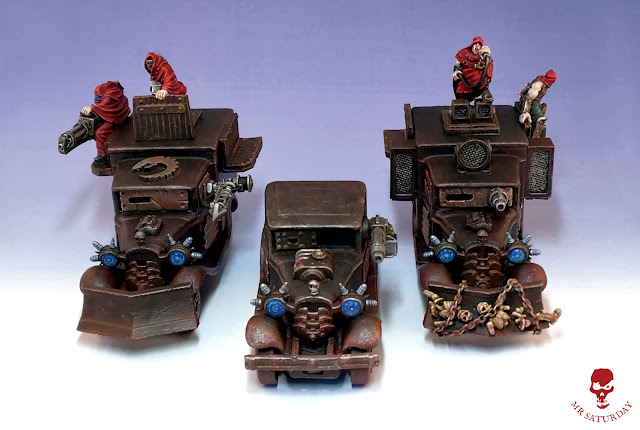 The two trucks have been in my possession a very long time, almost forty years I think. They were originally two Kellogg's Cornflakes delivery trucks I sent off for as a lad. Little did I know as I cut out those wee coupons from cardboard cereal boxes that I'd be ruthlessly defacing them several decades later. Life, you scamp you.

As well as the parts I amassed, I carved some armour plates from plastic card for the windows. That combined with some corrugated iron served to armour these lads up. Oh, and some nice big rams. The Joyful Word also has some skeletons chained to the front. These are from the All Quiet on the Martian Front range. 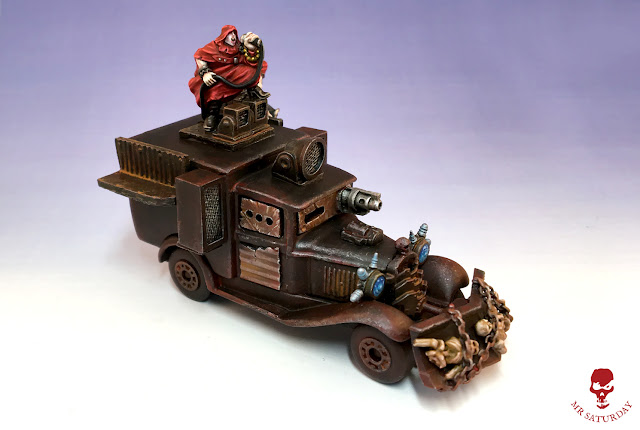 The Joyful Word above is kitted out with a machine gun, crewman with grenades, ram and a wall of amps. Not the most efficient weapon, but huge laugh potential. The magus is no doubt extolling the faithful to ever greater effort via five huge meaty amps. 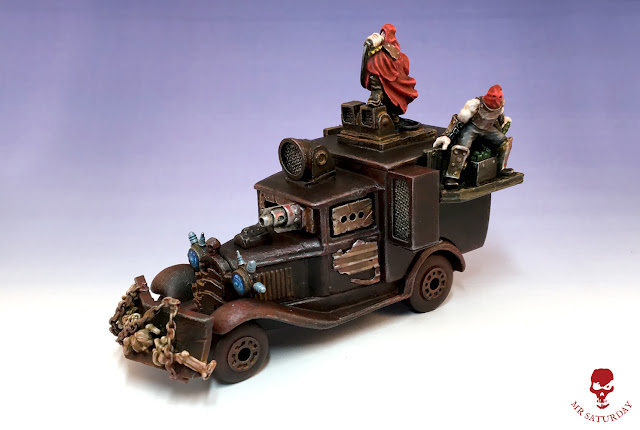 I used a combination of traditional and contrast paints here. Mostly to quiet down drybrushing or add some vibrancy. I also used the Shyish Purple contrast paint with some medium to apply some recess glazes to the cultist's red robes. The slightly smaller scale begs greater contrast, though I might start using it on my 28mm stuff too, as it works nicely. 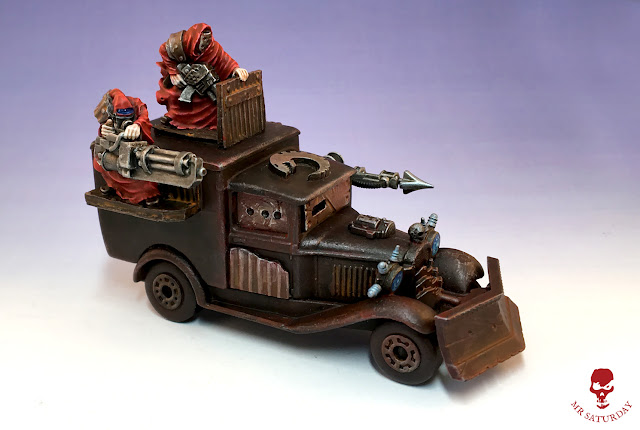 The Zealot is a more aggressive machine. Armed with a minigun, harpoon, ram and a crewman with a machine gun, it's an unsubtle automobile. These two trucks won't be super nippy, but they'll certainly be good for turning rivals cars into flaming scrap metal. With these two done I think I'll need to add something more nippy like a buggy or performance car. Maybe a bike or two. 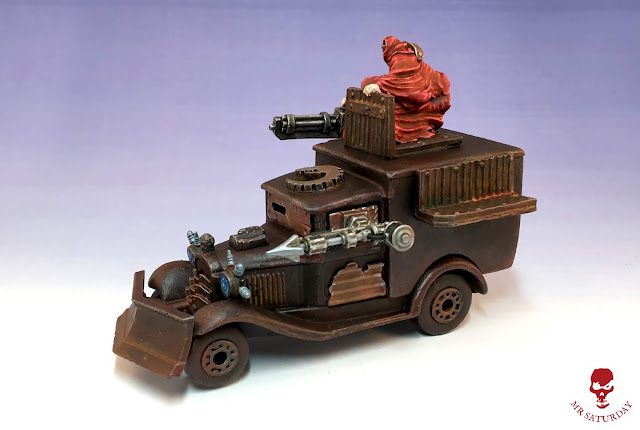 My next build will be a lot more overtly genestealer cult related. I mean, the cult limo is a staple, but I'm thinking something more open top, with just a sprinkle of throne room thrown in. Daddy needs a sweet ride too.
Posted by Mr Saturday at 5:55 PM 10 comments: