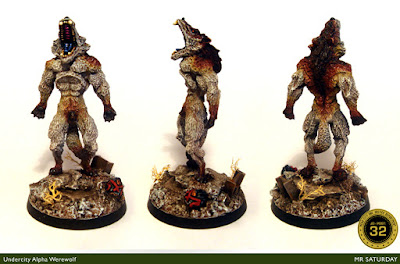 We head below city bottom this week to the undercity. A less well know denizen of the old cities are the werewolf packs. Dredd himself spent a little time running with the wolves during one of his undercity excursions during 'Cry of the Werewolf'. Originally caused by a convenient radioactive compound, the wolves are one of the many dangers lurking in the undercity. 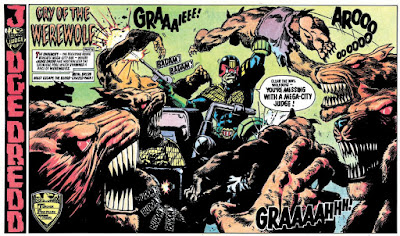 This particular fellow is an alpha, as he is enormous. The 'giant werewolf' from the Citadel Night Horrors range. He comes with a separate head, so some fur sculpting was required to give him a mane on the back of the head and neck. He also has his junk out. Fair enough.

I wanted to go a bit further than a grey or black wolf, so I tried a little patterning on this guy. I'm happy with how it turned out, making what could be quite a plain mini into something a little more interesting. 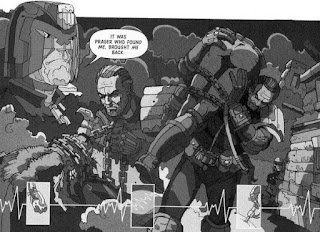 The alpha, Prager, is the start of a group of unsavoury undercity dwellers I'll be adding to over the next while. Sho3box will be back next week with more Judgement Day. 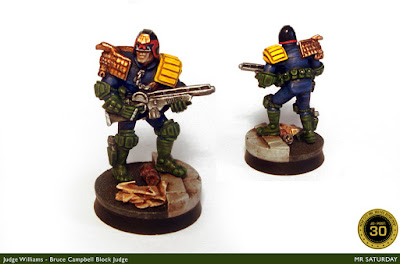 This week sees something of a red letter day in my submissions for Judgement Day. An actual judge. It was a real treat painting him, and seeing the familiar colours of the Mega City One judiciary come together as the paint went on only added to the enjoyment. I see a lot more judges in my painting future. I may even give old stoney-face himself a go.

Judge Williams here is not the most by-the-book judge, but several commendations for insane bravery have kept him off the Titan shuttle. He is currently kicking his heels as Bruce Campbell block judge, and it time he will lead an Apocalypse War resistance unit with the BC Block Citi-Def. His faithful boomsti... I mean lawrod will come in handy. It'll be...

This also defines my approach to any zombies for Judgement Day. It's deadites all round.

Next I'll be painting up one of my favourite denizens of the undercity. In the meantime Sho3box will be back next week as Judgement Day continues.
Posted by Mr Saturday at 3:00 PM 6 comments: 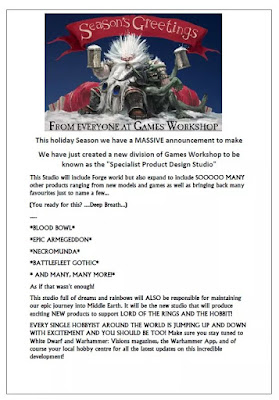 Who knew when this hastily put together missive from Australia was the herald of one of the biggest turn-arounds we've seen from GW? I certainly didn't. Looking at it, it screams troll, there are even spelling errors. I was quick to dismiss it as total guff, publicly and repeatedly.

Seems I was quite wrong on this one. I've never been so happy to be so.

As the day wore on, the rumour gained traction, until eventually, this appeared on the GW news app: 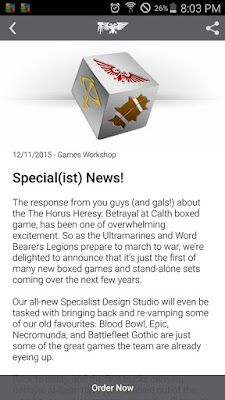 All doubt was dismissed. It's the most unusual news release I've ever seen from GW. Perhaps it was a mistake, maybe that Australian store manager is already clearing out his desk, but I doubt it. Everything about this tidal wave is out of character, from the way it was released to what it actually means. GW are resurrecting a plethora of specialist games, from my beloved Bloodbowl, Epic and Necromunda to Battle Fleet Gothic and more.

Knock me over with a feather guv, so much for the 'We're no longer a games company' schpiel.

It seems GW have cottoned on to the fact that these games are still getting played and indeed, have vibrant communities, years after they were abandoned. Looks like they want back in on the action, but hell, what a turnaround. I'll still keep a weather eye on things until I see more news, but wow, it's like 'Let's make Mr Saturday weep salty red tears of joy.' day.

Now, with mention of box sets, allow me to drift into the magical land of wishlisting. A box set for say, Bloodbowl, at the quality level of Betrayal at Calth. Lordy. New plastic ships for Battle Fleet Gothic? Even more intriguing than the potential miniatures, the resurgence in play. Getting some new blood into these games would be... epic. Looks like my titans might need an oil change.

Now, if you'll excuse me, I need to get my Scavvies in order, finish that Necro team and prep that Imperator titan.
Posted by Mr Saturday at 11:37 AM 9 comments: 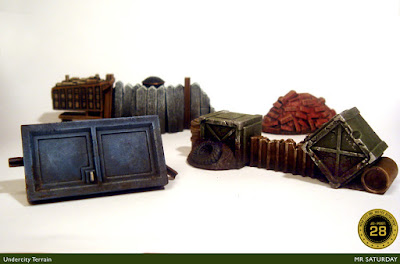 This week, with minutes to spare, we have the beginnings of my under-city terrain set. Judge Williams will be along presently, but I want to take my time with him, especially after watching episode one of Ash vs Evil Dead, which was pretty damn great, incidentally. 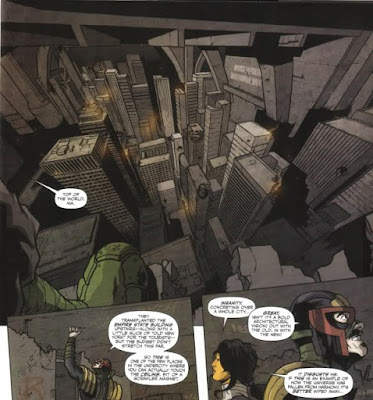 Anyway, I have little in the way of sci-fi terrain, and I decided I would concentrate on the under-city of Mega City One. Concreted over and left to decay, the under-city is the abode of mutants, troggies and werewolves. You heard right, werewolves. So, this was as good a time as any to kick it off. These pieces are from the Mantic Mars Attacks range, pretty much prefect for urban ruin. As I intend to paint up plenty of Martians as well, this set will get plenty of utility for modern and near future settings. The modular buildings from the same range are bang on too, and will give me a few multi-storey ruins. I painted these pieces as rusty and dirty, and it gave me a chance to try out some sponge weathering without too much pressure. I like the random effects sponge give, I'll certainly be using it more. Once again the GW technical paints proves their worth. I love you, Typhus Corrosion and Ryza Rust. 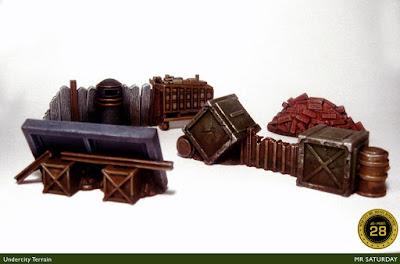 I think I'll soon add a chem pit, and start looking about for some terrain mats. There are loads of great ones out, so I'm sure I'll find something to match. Course, I'll eventually need some denizens too, so troggies and werewolves are definitely on the list down the road.

As always, Cheetor will be back with more Judgement Day from Sho3box next week.
Posted by Mr Saturday at 11:42 PM 10 comments: