With BOYL fast descending on me, I finally finished work my titan for the epic clash on Saturday morning. This is my first painted epic miniature and something of a bucket list miniature for me. I've long wanted to paint a chaos titan. Now of course I want to paint another. In any case, I dug into my hoard of titan bits and constructed the Iron Skulls legion titan, The Misericordia. 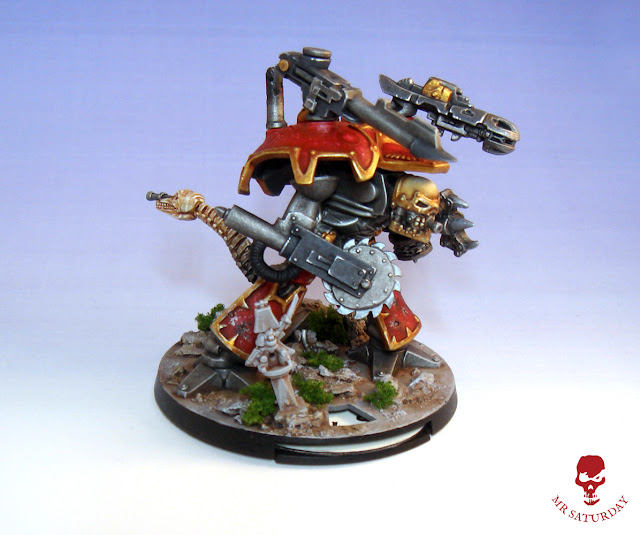 It's been many, many years since I played epic, and I had forgotten much of the rules. After some consultation with my epic expert peeps I went for some reasonable guns and lots of close combat fun. The trident in particular seemed too entertaining not to take. There are several chaos titan heads, and this skull-faced one was my first choice for a Khornate titan. 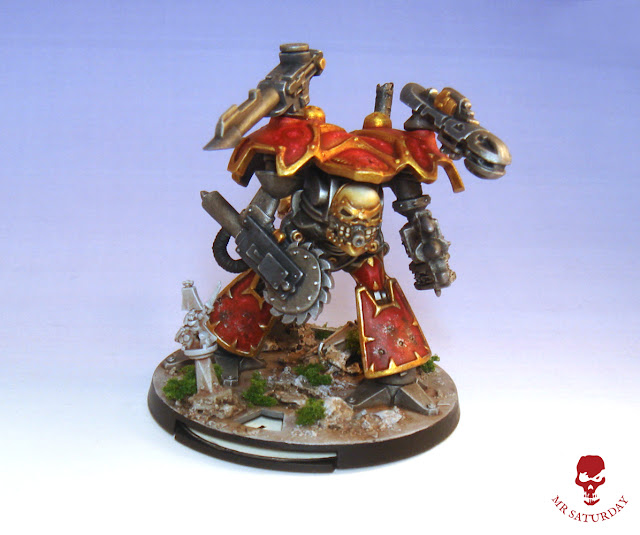 I tried to future-proof this titan a little, so all the weapons are magnetized. After some early insanity I recessed many of the magnets (Magnets do not love paint) bar the ones for the metal arms, which are mostly out of sight and need a bigger magnet anyway. I hear that the carapace weapons are twin-linked these days, so for my second titan I'll paint another plasma cannon so I can double up on the Misericordia if needs be. I painted the weapons in a neutral scheme so they can be swapped around on various traitor and loyalist titans. 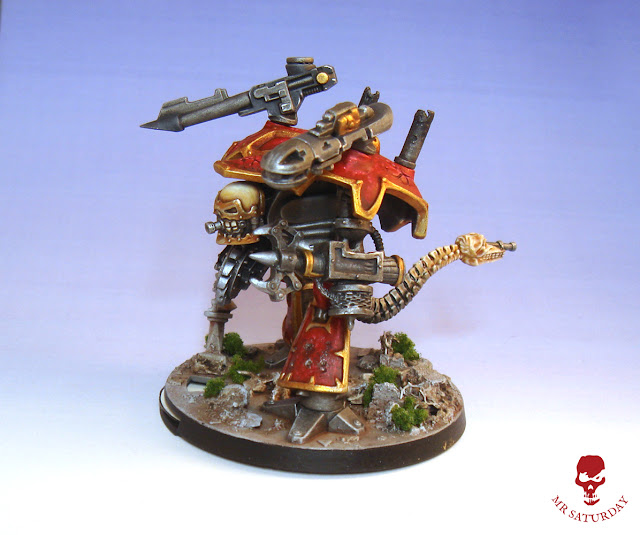 As you can see, our titan has a big old tail. The face on it creeps me out some, reminding me of 1980s European stop motion films, which scare the piss out of me. I blended the metal of the titan's superstructure into bone, which I think worked pretty well. You can also see that sweet trident better here. 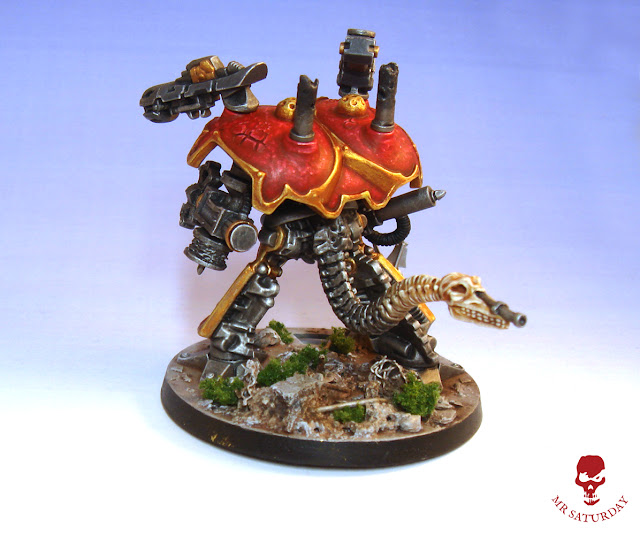 An effect I wanted to try on the carapace was a cracked and pitted effect. After 10,000 years of service you'd expect a few wrinkles. You cans see it on the left side here. I splashed on a liberal dose of crackle paint (Agrellan Earth) to get the effect, then covered it in a layer of pva glue to stop it flaking off.  You can also see the exhausts. Yeah, I know they have nuclear reactors. Rule of cool baby. 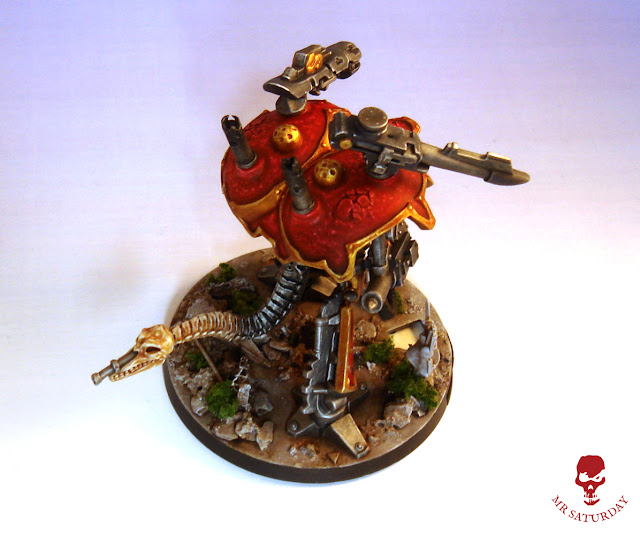 More crackly carapace for you here. That tail, Jesus.

The basing was pretty straightforward. I wanted a ruined, slightly overgrown city. The statue and collapsed tower added a little scale. Clump foliage works quite well for epic too. Some metal mesh torn up for steel concrete reinforcement sticking out of wrecked walls and done.

So, there we are. The Misericordia strides into battle this Saturday against all-comers!
Posted by Mr Saturday at 11:11 AM 10 comments: 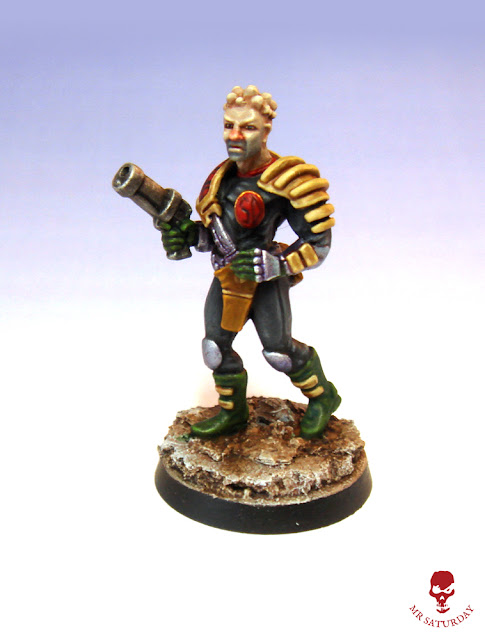 Something random from The Mumblings today. Those of you who are fans of the venerable 2000AD might recognise this fellow as the Strontium Dog Middenface McNulty, sometime pal of the main character in the Strontium Dog series, Johnny Alpha.

I've always been a fan of Middenface. When I were a very wee lad I used to love how he spoke in the comic. It was only when I got a little older I realised this was because he was a Scot, from Shytehill, in fact. Here's a wee taste of Middenface in action. 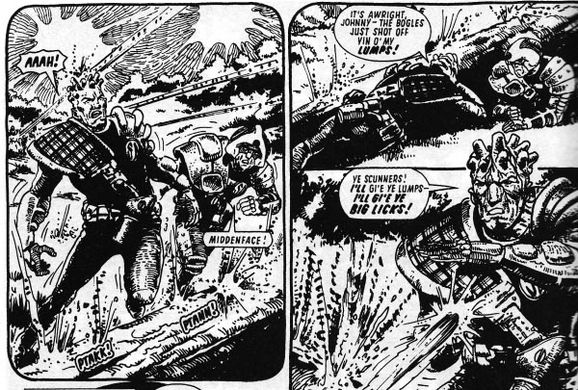 At BoYL this year one of  my pals is running a Strontium Dog game (the schicklgruber grab) where the stronts attempt to carry out a warrant to arrest Hitler to bring him back to the future to stand trial. How could one resist a nuts game like that? So as I had picked up Middenface when Foundry were selling off their 2000AD range, I had my man. 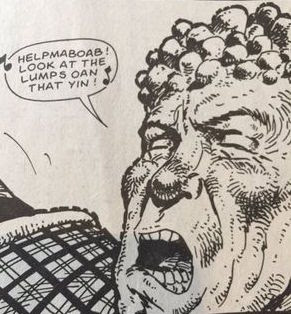 I picked some quite vibrant comic book colours for Middenface initially, then dialed it back to give him a little more realism. I wanted to make him look a bit more like the seasoned guerrilla fighter and bounty hunter he is, so I gave him a fairly heavy five o'clock shadow as well, and just a touch of redness on his nose. He is pretty fond of the gargle.

Painting his tartan shoulder pad turned out way easier to do than I expected, though I have simplified it down some to work at 28mm. 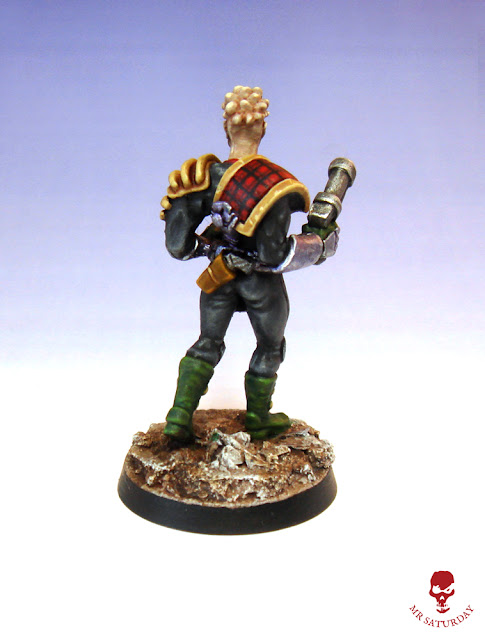 I'm looking forward to seeing Middenface in action at BoYL along with the other stronts the rest of the players have been painting. I'll try my best not to talk in a bad Scottish accent the whole time, but I can't promise there won't be at least one 'Take that ye scunners!' or 'Get that stitched ya bam!'
Posted by Mr Saturday at 2:26 PM 6 comments: