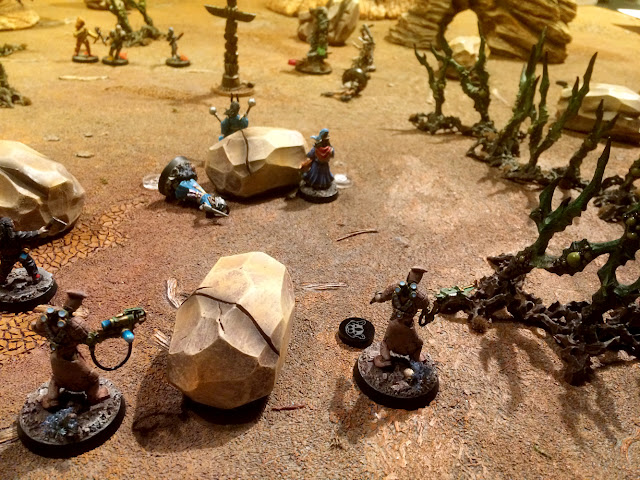 Last weekend I travelled down to Cheetor's place in Cork. Myself, Cheetor and TheOttoVonBismark had planned a weekend of Dracula's America. In Space. The posses were painted, the terrain was ready, the rules were read and the beer was in the fridge. Off we went.

I'm not going into a blow by blow account of the games we played, more a general overview of how we felt about the system, the posses we used and what we're planning next. 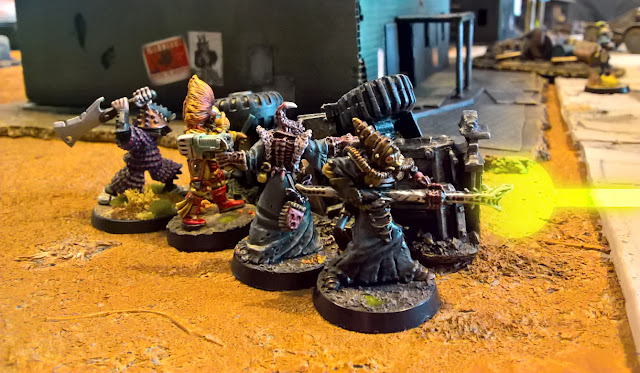 Sean (TheOttoVonBismark) brought a very tasty Slaaneshi chaos cult using the Crossroads Cult rules. This fit very well indeed, with a Keeper of Secrets (Major Entity) appearing in the first turn of the first game. That made me sit up and take notice pretty rapidly, as only a twelve foot four armed one-boobed skull-faced daemon can. 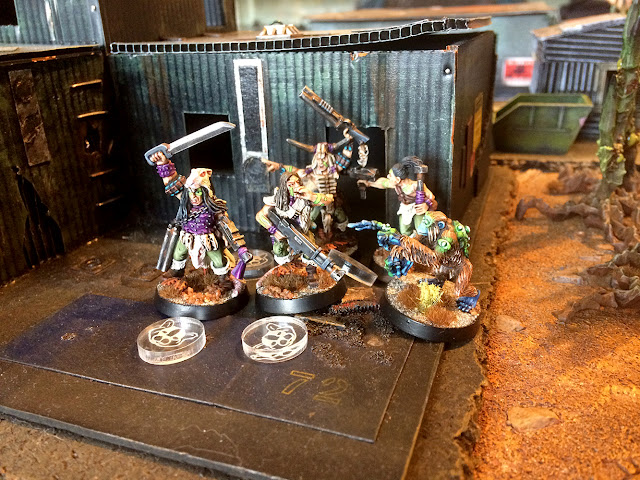 Paul (Cheetor) has a huge gang of Ratskins, which straddle the settings of Dracula's America and the quasi 40k sci-fi setting we chose for it perfectly. In this particulat scenario they are trying to protect a Jokaero from getting murdered by the other posses. The gorgeous terrain is all from Cheetor's collection. 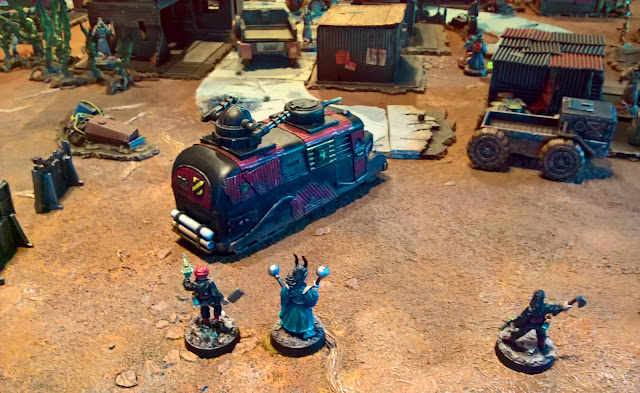 My own posse are The Shadow Empire, Lo Pan's (from Big Trouble in Little China Lo Pan) underground criminal organisation. They match up seamlessly to the Shadow Dragon Tong faction. In this iteration of Lo Pan's existence he has managed to gain access to eldar technology and is retro-engineering it to suit his own foul purposes.


We played two games of Dracula's America, Shootout and Escalation. What struck me immediately was how smooth the rules were. As with all reasonably casual rule-sets a modicum of common sense is required, but assuming that we got into the rules nice and quickly. Building posses is easy, especially when starting with a campaign posse. There are three levels of character, Novice, Veteran and Hero, each using a different dice for tests, a D6, D8 and D10 respectively. You buy the posse weapons (only basic weapons for a starting campaign posse) and that't it. The layout of the book jarred a little, flipping between historical and supernatural sections, but that's a minor quibble.

The card-bases initiative system is a lovely mechanic, even more so when you take the hunting grounds into account. The encounter rules for two players using the same card adds another interesting but not obstructive element, though Cheetor might disagree having been robbed of an opportunity to riddle Lo Pan with bullets when a gloom fell and reduced his weapon range.

We didn't use the hunting grounds in these games, but I like the rules for it a lot. 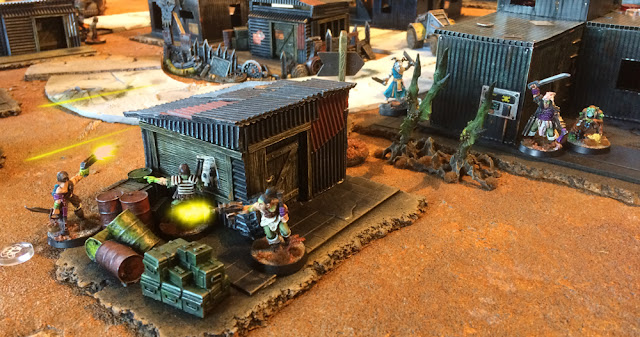 The progression system is very intuitive and pleasant to use. Rolling for injuries, advancements and so on is straightforward and entertaining, including robbing territory from your opponents. Even those who don't advance gain experience which makes it more likely they will advance after subsequent games.


There is one expansion so far, Hunting Grounds, which introduces new rules and factions, including the Shadow Dragon Tong that I was playing, as well as outlaws, mercenaries, new skills, gear and so on. I'm certainly going to be playing more games using these rules, I've already got plans for an addition to the Shadow Empire, an 'undead drifter', or in my case a reanimated eldar that Lo Pan is plying for secrets.

What a jerk he is.

Cheetor is playing with the idea of something vampiric next, but I'll let him loose details on that as he fancies. TheOttoVonBismark is thinking of something orkish. Or genestealery. Or both maybe. 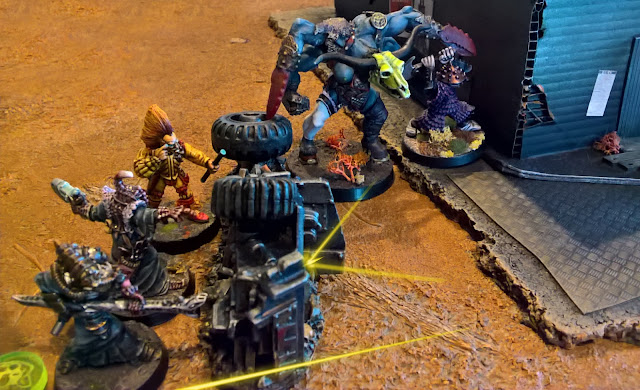 All in all I couldn't recommend Dracula's America highly enough. As you can see, you can play it Weird Wild West style, or go Weird Wild West in Space, or whatever you fancy yourself and it works just dandy.
Posted by Mr Saturday at 4:47 PM