Another BOYL post you say? Well, this one is special, as it's my first one. After many years crying into my pillow while the BOYL photos and posts roll in this time of year, I am at last able to join in. YEAH! Come with me on my whirlwind adventure into hobby overload. Prepare yourself, this is wildly self-indulgent. (Warning: I have shamelessly lifted photos from all over. Should one be yours and you want it removed I will forward the request to HR and legal and we'll be in touch.)

I set off to Notthingham last Thursday. After I met up with some of my my gamer bros who had similarly arrived early, we went on the rip. Several drinks later some more folks arrived and buoyed up by excited anticipation we had a couple more drinks. A good start in my book.


Day 1: Warhammer World
On Friday I rose early and walked through a very sunny Nottingham to have breakfast with yet more of the gaming fraternity. I greeted old friends and met several people I've known online for years but was meeting in the flesh for the first time. They were, to a person, all excellent folks, turns out. With that, off the Warhammer World we went!


I'd never been to the mecca of all things Games Workshop, though I'd wanted to visit it for many years. The plan for the day was for most of us to play a Realm of Chaos warbands campaign, and for myself and a few others to take things a little more easy, take in all the hobby magic, see the exhibition, look at all the shinies, drink a Bugmans and play some Underworlds.


The rest of the fellows had put together some amazing chaos warbands for the day, which they flung at each other with manic gusto.


While the others brutalized each other in the chaos wastes the rest of us got our Underworlds on. I brought my Sepulchral Guard on their first outing. It's a great game, which I lost several games of over the weekend. It's given me a need to deck build and paint some Nightvault terrain.


Once We'd had played a few games and wandered about the hallowed halls, fought the urge to buy everything in Forge World and then had to go and have a sit to calm down, it was time to visit the exhibition. I'd been very much looking forward to this. There were some exhibits in there I'd been wanting to see for decades.


Pat (BazPaz), Paul(Cheetor) and myself dove in. Right at the start of the exhibition, there it sits. John Blanche's undead assault diorama. This kind of stopped me in my tracks, and 12 year old Mr Saturday took over the show. I spent about ten minutes staring at this. Photos are fine, but seeing the real thing really overwhelmed me. I'd still be there if I hadn't had to move on to see everything else.


So, once we tore ourselves away from the many delights of Warhammer World we took to Nottingham town again, with Curis bringing us to an all you can eat place. There are few things better than unlimited options when you're hungry. I ate a great deal. A great deal indeed.

Day 2: BOYL Saturday
Myself, Colin (Whiskeypriest) JB and Sean headed out to Stoke Hall early Saturday. I wasn't sure what to expect, but free range chickens was not one of the things on that list.


I was playing in JB's Epic game. Nine titans would battle in three teams to find out who iz da best. (Little clue there to who won.) For my part I had painted up my first warlord titan ever, the chaos titan Misericordia.


The ork gargants just rocked this game. Within two turns two of the Imperial titans were nothing more than rapidly cooling radioactive vapour. The remaining Imperial game (piloted by princeps Bazpaz) played a canny game of hide and shoot before double-crossing it's new chaotic allies and then paying the terrible price. Sadly the gargants, despite soaking up an incredible amount of fire, then managed to destroy two of the three chaos titans and win the game. The warlord titans poured city-destroying firepower into the gargants, but managed little more than winding a gretchin and knocking over a bin on deck five.


After the epic game it was time to investigate the famous foundry miniature cabinets. In particular I wanted to see Bryan Ansell's genestealer cult, with the famous Dale Hurst limousines.

I wanted a good old look at the chaotic hierarch on the top left here as I have a plan to convert one of my own. I've never seen anyone make a modern version and I'm quite stoked to do it now.


Again, I wanted a hard look at these as I'm planning a possessed magus based on the Blackstone fortress chaos psykers. I may even have a go at that banner. It tickles me to imagine a secret chaos coven inside a generstealer cult. 'Aha, we are revealed! Praise the Star Gods!' 'Actually brother, about those Star Gods...'


Limos. I love all the new cult vehicles, but limos you know? Another thing to look into. I also blew a little kiss to the unreleased hybrid on the right with the halberd. I would donate your kidney for one of those. I'm going to tart up some of those plastic guardsmen with modern cult bits for brood brothers too. I got so much mojo from this.

Following a wander about the miniature cases there was some time to enter the BOYL painting competition. I entered three minis and then got ready to join Michael Cassidy's Strontium Dog game, The Schicklgruber Grab. The game follows a bunch of Strontium Dogs are sent back in time to arrest Hitler near the end of World War 2. Michael had painted up a load of period miniatures for this game, which I was eager to play being a big 2000AD fan.

Before we could get stuck in though, the painting competition results came out, and by the Gods, I won one! The competition was judged by Tony Yates, Garth James and the mighty John Blanche. Having my minis judged by John Blanche hisself is something of a tick on the hobby bucket list. I've been soaking in his artwork since I was twelve. In fact, having so many gaming celebrities around all weekend was a bit mental. Some of ye might be used to this, but this was my first BOYL and it was utterly new to me. Walking past Rick Priestley to get a coffee. Chatting with Kev Adams in the graveyard about the supernatural and sculpting. Totally failing to realise Trish Carden was there. If anything, I wish I'd stopped and chatted to them all a bit more, but one was a tad starstruck in truth.


The mini in question was my hybrid rider, Kol Renko, that I painted for Jon Boyce's (Axiom) Ash Waste Race game. More on that later. Here's the fellow himself.


Having spent no small part of the previous day staring at Mr Blanche's sublime Undead Assault diorama in Warhammer World, this really was a bit surreal and highly excellent. It put a pep in my step for the rest of the weekend. You can see how pep-filled I am here.


Other pals (JB, Chris Webb and Steve Beales - Thantsants. I played epic with him while never realising it was him. I dearly love Somewherethetea'sgettingcold) picked up prizes in the other categories for their excellent minis. The painting standard overall in BOYL is superb.

So, once my feet touched back down we returned to Strontium Dog. Michael had been running it all day and the winner of each game got a full size SD badge that Michael printed and painted himself. He is generally regarded as one of the finest gentlemen in the hobby. Buy him a pint next time you see him.


Our game had four stronts (the others were one of the Stix, Jerry Edams and Slabhead and the Dervish Dogs) make for the central building under heavy shelling and Nazi patrols. My chosen stront, Middenface McNulty punched, blasted and head-butted his way to the building only to be thrown from a second story building by the insane Dervish Dogs who then herded Hitler away to judgement.


Next up was a game by another fine gent, Jon Boyce. The Ash Wastes Race had also been eagerly anticipated, and there was a full lineup of racers. Some of the most mental creations I've ever seen revved engines, slipped mounts stims and racked shotguns. The race was on!


As soon as starter pistol fired the shenanigans started. Racers punched, rammed and shot each other with abandon. Shane (Papafakis) turned his rather excellent racer about and raced off the other way. You do your thing man. The rest of us ploughed on. 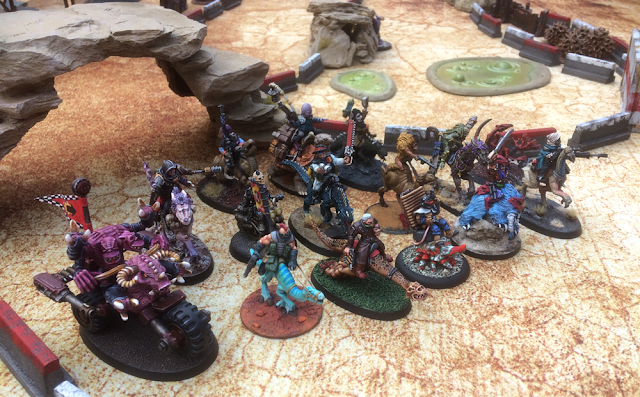 Soon racers began to fall as they were shot from their mounts or engines exploded. There were mines to consider, swampy ground and soon enough the leaders pulled clear. Despite my hybrid unloading several rounds, Papafakis ambushing him and Sean deciding to ride through the barriers with his ork hybrid, Colin brought home the winner's trophy! A cracking game. 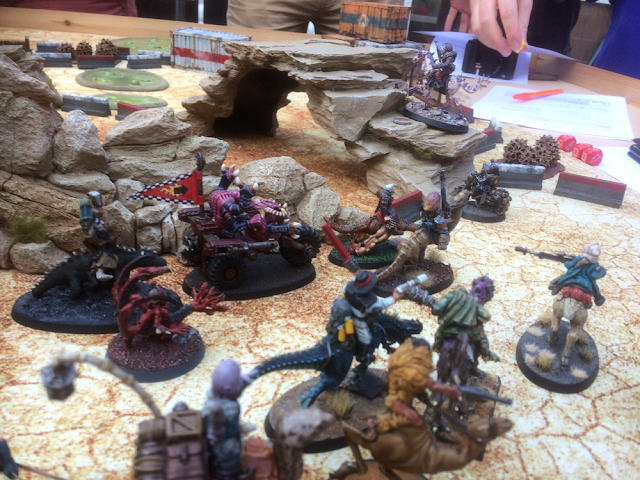 With that, Saturday at BOYL came to an end. We loaded up and headed back to Nottingham. More food, beers and laughs ensued. Turns out Lopez does looks a bit like Tiger Woods in the right light.

Day 3: BOYL Sunday
Sunday saw us face the machine as we played Paul's (Cheetor) terminator survival game. The idea was not to win, but rescue a group of captives and then buy them time to escape by being the last survivor to perish. Terminated players could then play increasingly dangerous machines until all the humans were dead. I had great fun in this game. Bouyed up by taking out a T800 in turn one, I ran, dove and shot my way across the table.


Again, the game attracted a full compliment of players, so the mayhem level was high. There were some great survivor minis, and Cheetor had a very healty compliment of Skynet's finest, including a Hunter Killer.


My favourite moment has to have been Pat's survivor taking down the HK with a missile launcher, only to be shredded by a second coming in behind him. No future baby.


I pulled off the win in this game, well, joint win. Colin and my survivors being gunned down almost simultaneously. Ulysses' body hit the floor a couple seconds later I reckon, having been torn apart by a T800 with a minigun. That's what the T1000 nearby told the ref anyway.

I had planned a game of Space Hulk on Nico's majestic table with JB, but time, she was against us. I did get to have a good chat with Nico where we compared cults and had a chat about hybrids. What a guy.

Before things broke up I just had time for one last game of Underworlds. Chris (Curis) ran at me shouting 'Fight me!' with his hands in the air, and we set to battle. We had tried to get a game in all over the weekend. Chris pounded me with his beautiful orruks, but it was a really fun game and Chris is a pure gent.


So, that about wraps it up. A huge thanks to everyone who organised games, painted minis, drove cars, sorted accommodation, made breakfast baps and ran the thing. I'll see yez all next year!

Email ThisBlogThis!Share to TwitterShare to FacebookShare to Pinterest
Labels: BOYL, Bring Out Your Lead, Mumble