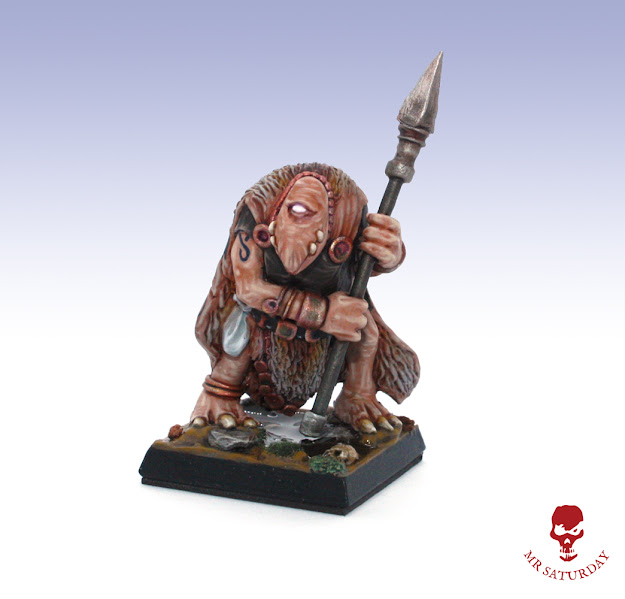 After a bit of a dry spell I have another fimir for you today. Tadhg, Seanchaí of the Fir Domhan. (The Fomorian Wayfarer from Krakon Games) He's a human size fimir, and is unlike many fimir-style models as he looks more of a wanderer than a warrior, despite his long spear.

I've been looking forward to painting him for a while. I decided to take my new Raphael series 8404 brushes on a bit of a test drive with him, so I added a spot of freehand to his cloak. 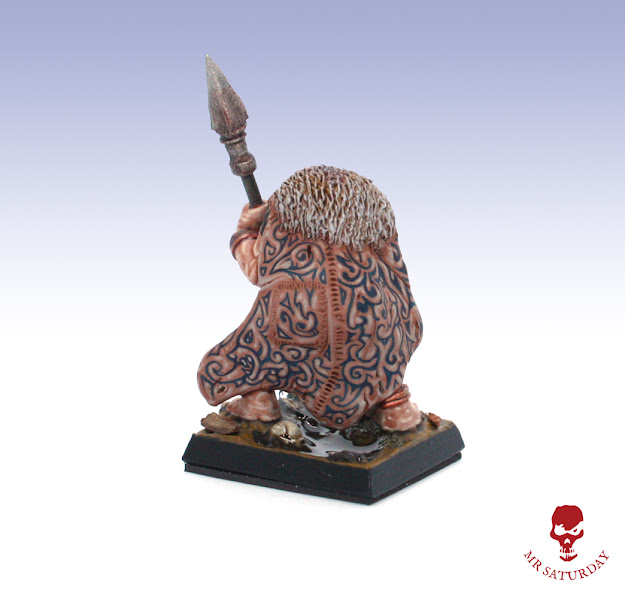 They are really nice brushes. They keep their point very well, and hold a nice volume of paint. I had been reduced to painting with scraggly ruins until they arrived, so it was a delight to have new brushes. I best not leave it so long next time.
Here's Tadhg's backstory:
Tadhg is a welcome sight among the settlements of the Fir Domhan. He often appears around times of festival or celebration, but also times of mourning or ceremony. He is a Seanchaí, or storyteller, a custodian of tradition and keeper of heritage. He is also quite the gossip, and carries news and goings on from village to village. A master orator, his tales of heroism and tragedy are much loved by the fimir, though he is a frequent visitor to the human villages of the Tuatha Taiden as well.
He carries a long heavy spear, though in truth it seems to be more staff than weapon. More famous yet is his cloak, the Eagna Mac Tíre. Cut from wolfskin, it is heavily tattooed with beasts, heroes and passages written in Fimar, the written language of the fimir, which shift and change to compliment whatever tale or speech Tadhg is giving.
Tadhg is not a tall fimir, and is, indeed, of the shearl class. In fact, he is quite rotund, being given to enjoying the constant hospitality offered to him. Despite this, he enjoys the respect and deference of even the dirach and the nobles of the Fianna. The Seanchaí is a sacred office, and to bring harm or disrespect to one is the most terrible offence.
Tadhg's tales are of the past, the present, and on occasion, the future. He presides over matters of custom and gives eulogy over the dead. He recounts to the fimir of the wrongs done to them, and reminds them of the deeds of heroes and villains long gone.
Then he is off on his way, and days are counted until he returns again. 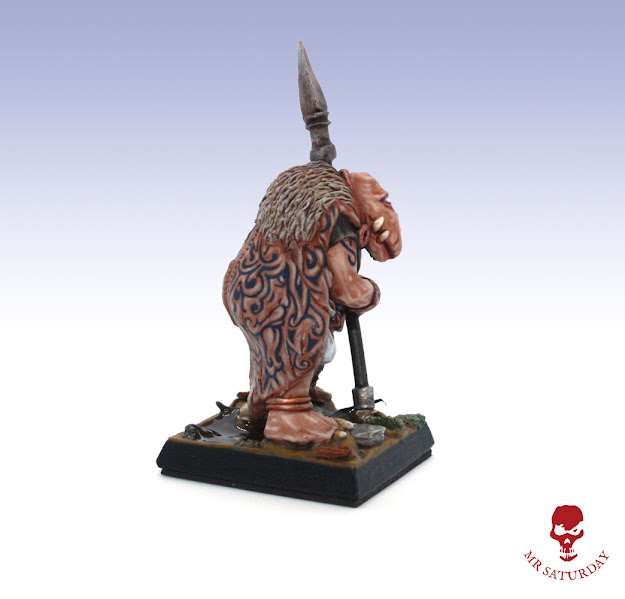 For gaming purposes, Tadhg will count as a minor magic user or lesser hero. I'm adding s few characterful fimir at the moment so I can build up a nice warband for Warcry, Frostgrave and so on. I have a daemonmaniac coming up that'll work for any larger ogre-sized beastie I might need.
Posted by Mr Saturday at 4:44 PM