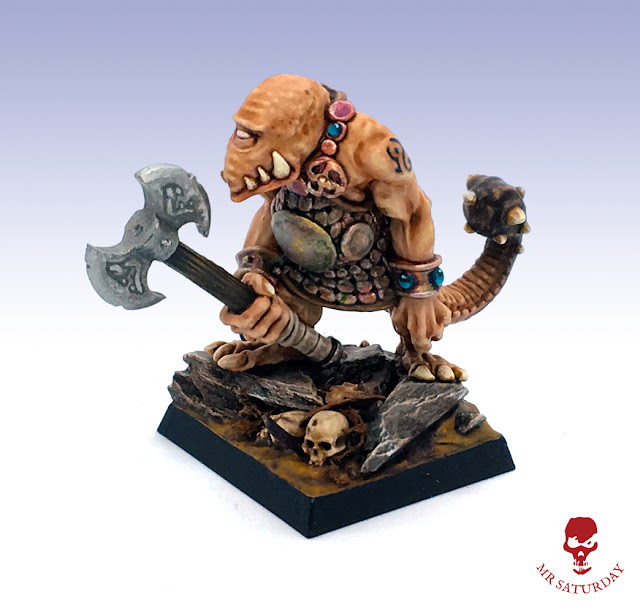 Aah, a return to one of my absolute favourite factions, the fimir! I've been promising myself I'd get around to painting Jes Goodwin's 1987 Limited Edition fimir for years, and finally, here he is. May I present Elatha, Fian of the Warped (Na Buile). I have several bucket list minis I have decided to take on this year, this being the fist.

The fimir were always intended to be roughly human sized, as this fellow is. The reasons they ended up the size of ogres is already well documented already. This rare treasure though, is the archetype as far as I am concerned.

It's been a few years since I painted a fimir, so as you do, I tinkered with my recipes a little. I altered the skin, toning down the yellow and replacing my highlight colour, Elf Flesh, for a less yellow tone, Flayed One Flesh. I also added more green to the bronze. I'm pretty happy with the results. 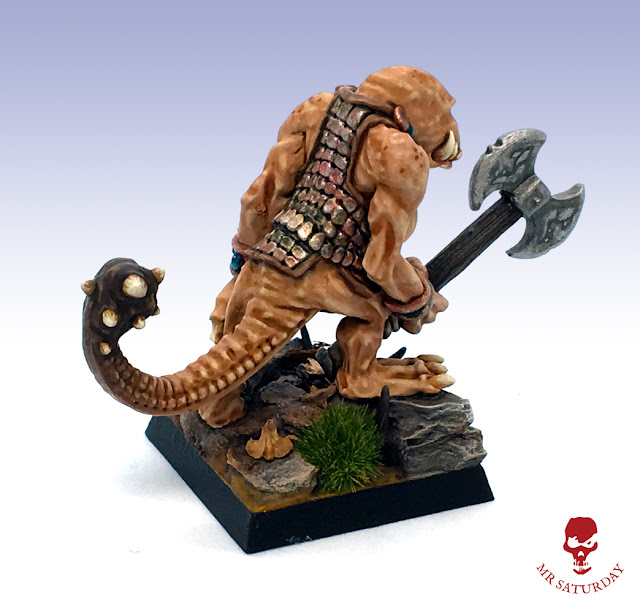 I also had a go at making the club tail quite dark, and blending it into the flesh tone. It gives him a little more visual interest, so I think I'll keep that for now. Elatha is the first member of a new unit of fimm, the Warped. These are fimir that suffer from battle frenzy, and enter into the warp spasm in battle. There will be a lot of weird mutations and so on. I have a couple of larger daemonmaniacs I'll be adding to this unit as unit fillers as well as serving as larger beasties in warbands.

I am finishing off a second fimir right now, of a very different type. A Seanchaí, a wandering storyteller. He'll be for adding to warbands for Frostgrave and Warcry. I plan on proxying the fimir as Bonesplitters in Warcry I think.

Speaking of warbands, here is Elatha, serving as Fian in Fedelmid the Dirach's warband.