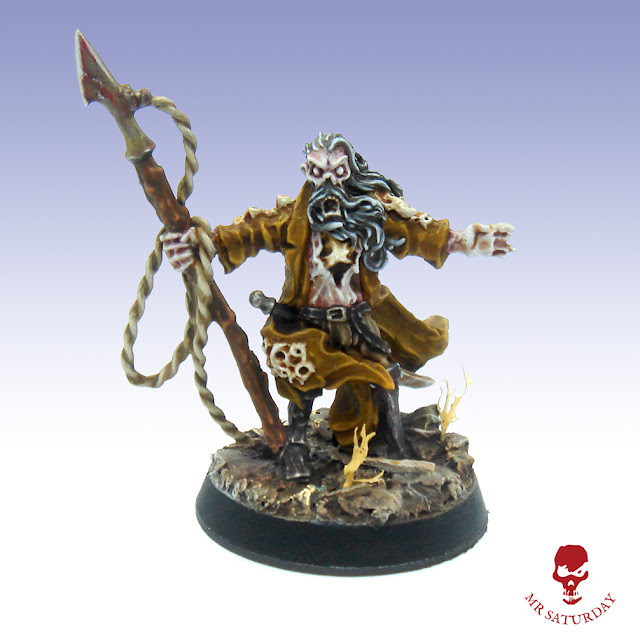 A red letter day for the Ghost Archipelago project today. With the addition of the hunter, Jarl Hakon, the crew finally becomes useable in games, having reached ten members. I do plan on adding a few more, but it's nice to have  game-ready crew.
Jarl here is another Arcworlde sculpt. How that rope cast is a mystery to me, but it looks cool. He'll join the crew as another specialist.
Jarl is only nominally a member of the crew of the Kraken. Though willing to pitch in when required, he is his own creature, and is oft left to his own peculiar devices. No member of the crew is ever foolish enough to touch Gertrud, Jarl's viciously barbed harpoon.
The Kraken came across Jarl Hakon floating on a battered section of ship's hull. He stood astride the wreck, harpoon in hand, as if waiting. When called out to, he shouted back that his ship, the Naglfar, had been attacked by a great beast that morning, and he was the last surivor. He had driven it off with his harpoon, but it was a cunning devil and would wait until he grew weary and attack again and again.
As Jarl roared back this answer The Old Man of the Sea leaned in close to Captain Wither and informed him that Jarl had, in fact, been keeping vigil on the limpet-encrusted remnants of the Naglfar for more than eighty years. Such had been his punishment at the hands of the wight whale. But his penace was at an end now, and the Old Man had need of Jarl's skills.
Thus the Old Man whispered down over the side of the Kraken and across the waves to the agitated Norseman. No soul aboard the ship heard what bargain passed between them, but soon enough Jarl was clambering aboard. Since that day he has proven his mastery over beasts of land and sea, and while he is not to be drawn to discuss the fate of the Naglfar, he is stalwart and reliable, which is enough.
Jarl has an old school whaler thing going on, so I painted his coat like old oilskins. The rest pretty much followed the recipes used on the other crew members. He's a big lad, so he went on a 32mm base. I try to keep base sizes consistent, but sometimes you have to go with what looks best. 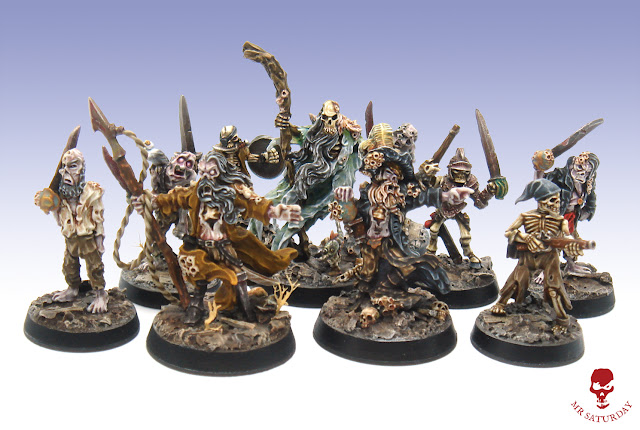 So there we have it! The crew of the Kraken is ready to explore the Ghost Archipelago in search of redemption, and possibly booty. I have a few more pieces to add, some treasure and one or two more crew. Or several. I have fishmen (Like the lads from The Flying Dutchman in Pirates of the Caribbean), more undead pirates, and various sea creatures and monsters all vying for a place on the Kraken. With a few choice additions I can have a viable Warcry band shortly.
So, I hope you've enjoyed the slow muster of the Kraken's compliment, sure twas only a joy to work on me hearties! Yo-ho!
Posted by Mr Saturday at 4:57 PM