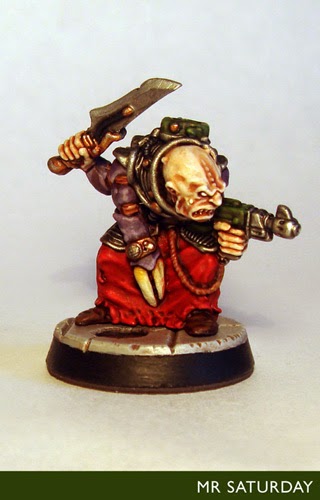 Another hybrid finished. This time we're going old school. This is one of my favourite models from the Rogue Trader era. I didn't get this guy in a fortuitous ebay bid, no. He's been in my possession since he was first released. He's had to wait some decades, but here he is at last. Quite a fiddly model to paint, with a lot of recesses and awkward little details, but for all that a real joy to have finished.

I did agonise over what colour to paint his armour. Black, purple, red, all were considered. In the end, with the scheme I chose, a simple metallic seemed to work best. It also has the advantage of highlighting all the wonderful detail in the armour ribbing and various joints. I did paint the little backpack/powerpack on his back green, which I'm using on guns, satchels and so on as well.

Here he is with his new school brother. Now to give them someone to boss them around.