Last weekend I continued the tradition of getting some mates down for a bit of a painting session. We set up in the man cave and settled down for day's clipping, gluing, painting and basing while talking shite and listening to various stand-up comedy routines on the interwebs.

It's rather amazing when your hobby usually comes in one hour bursts of an evening, how much you can get done in a full day. I managed to build a 50x50mm base extender for my meargh, a small but necessary job I had been putting off. Plundering other folks hobby supplies is an unexpected boon as well. I was offered a stash of volcanic rock for tarting up the base extender which, due to whatever way it forms, scales excellently to 28mm miniatures. I managed to fix a fimm standard bearer who had been damaged in battle, a fiddly job as the standard broke at the top of the pin I had put in, meaning I had to pare back the plastic to reveal enough pin to allow me to glue it back into a newly drilled standard pole. A real pain in the h$*e. He still needs a little paint before he is re-admitted to the cabinet.

Finally, I painted three wyrm daemons which I'll be using as 'crew' for the hellcannon version of Crom. All in all a goodly day's work. My hobby brethren assembled manticores, artillery, hellpit abominations and terrain along with a bunch of other bits and bobs. I am still chuckling after one irate comment: "Argh! There's nowhere I can put my fingers on the plagueclaw catapult where there aren't f@$king spikes!!"

A very pleasant surprise was a box of dark elves that was presented to me as the owner had left the hobby some time ago and they were just hanging about. Delving in I discovered a cache of 3rd edition dark elves, warriors, command and characters, some Marauder, some Citadel. Lovely.

Some games were then played. The very simple bit tremendously fun Ribbit. A great game for kids as well as bitter veteran gamers.

Next up the excellent Letters from Whitechapel. This is a cracker. Similar to Fury of Dracula, it pits the London constabulary against the infamous Jack the ripper. Essentially a game of cat and mouse, Jack must escape from the scene of the crime back to his lair before the police close in. I did manage to do in all the girls and confound the coppers this time round. Muahhahahaaa...

After wiping off the blood of the innocent, we thought we'd give Triumph and Treachery another go. I enjoy this expansion, and this time proved no different. Skaven, Orcs & Goblins and Fimir (chaos warriors) played hold the centre using only 500 points each. 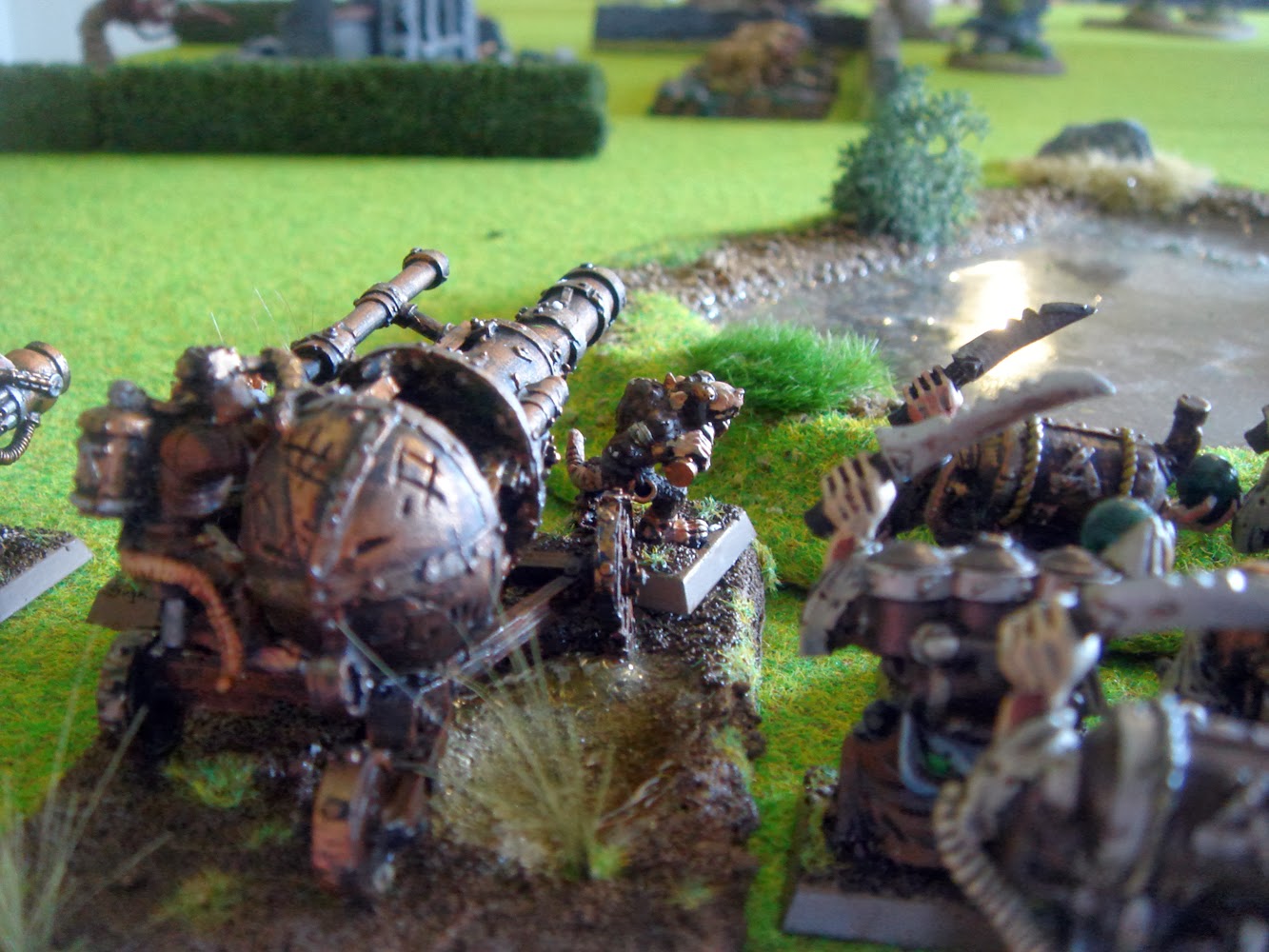 Over the course of the game it tooed and frooed with pleasant regularity, the skaven initially causing terrible damage with thier ranged weapons while the goblins shoved two fanatics in front of my chariot, smashing it to splinters. Of course, the next thing they did was panic off the table along with the spider riders. Heh. 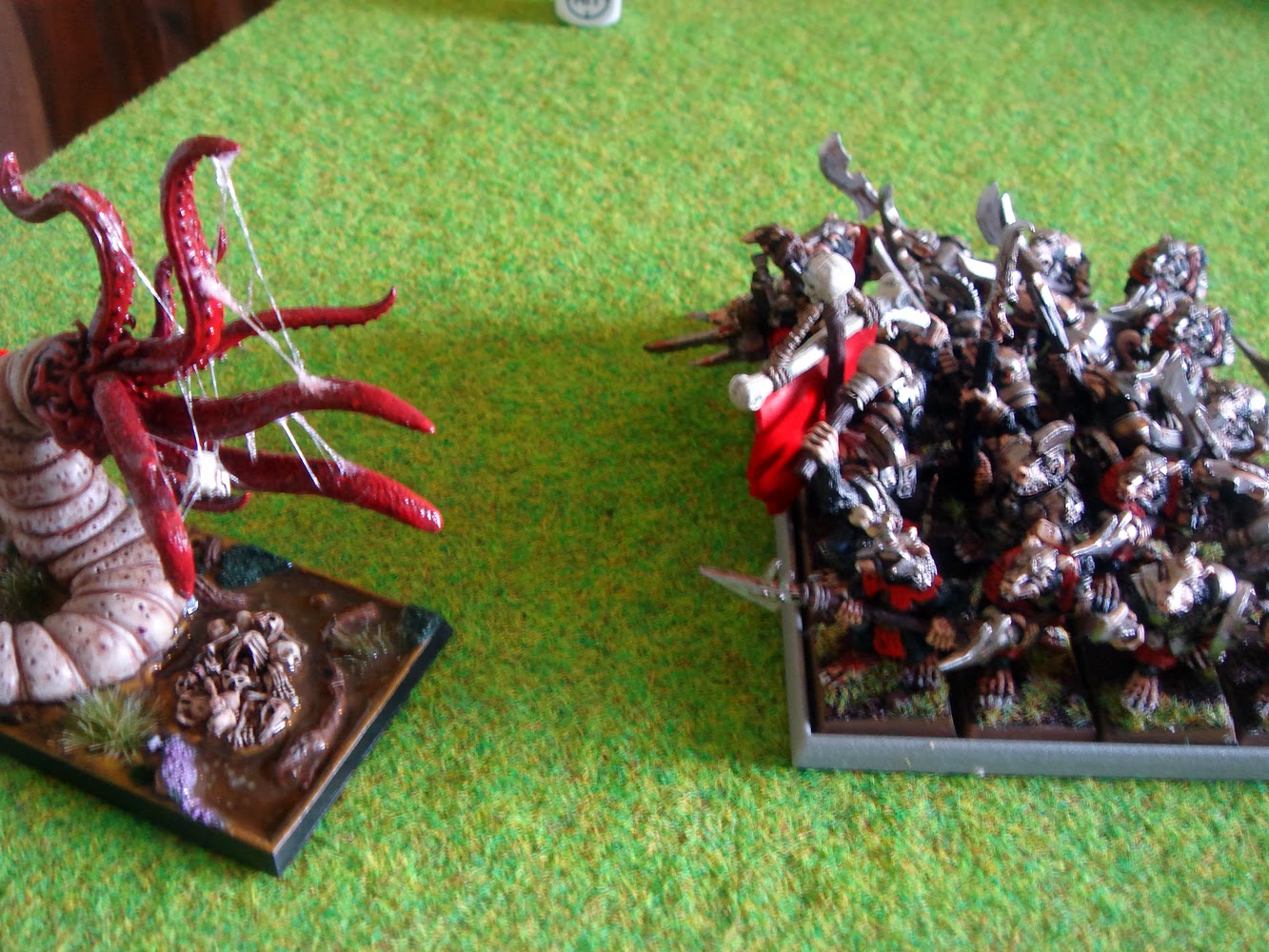 The cards provided constant hilarity, frustrating skaven shooting phases and removing rank bonuses. Not before the warp lightning cannon blasted Crom off the table though. I managed to take the centre and rack up a couple of turns worth of victory tokens before charging Grunsgul into the remains of the savage orcs and getting butchered. MVP certainly went to the savages, who chopped their way through skaven globadiers, the lightning cannon, stormvermin and finally my dirach. Still, I managed to come out with the most coinage and stole the win. Great fun.T&T rewards aggressive abandon combined with ruthless back stabbing, so perfect for my group. 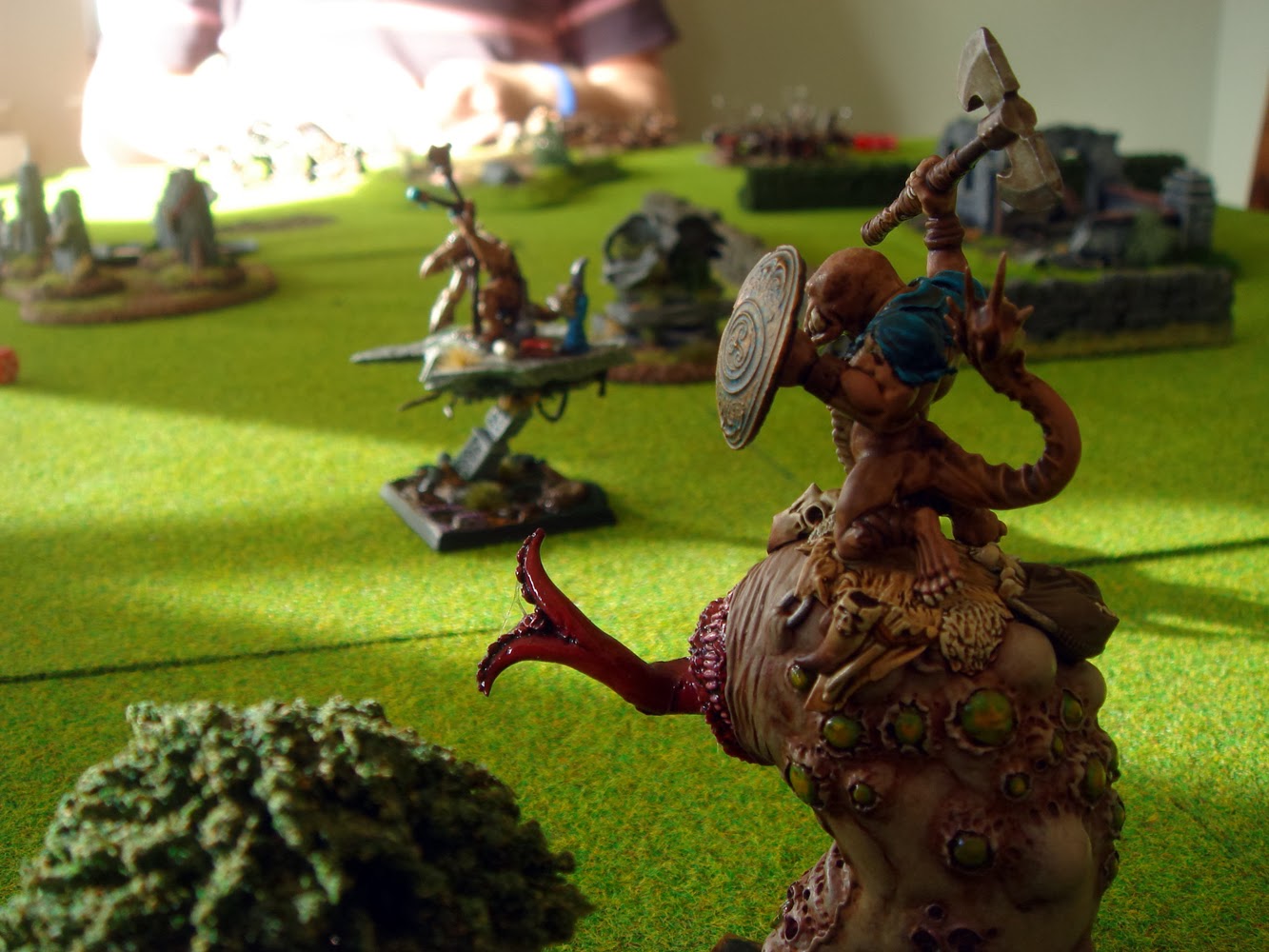 All in all a good weekend, we'll certainly be doing the painting/chatting/drinking thing again.
Posted by Mr Saturday at 12:28 PM