I'm ploughing towards the end of assembly for the half dead, with only two figures left. Then I'll be swapping the green stuff, clippers and files for paint and brush once again. I'm hoping to have the unit painted by the end of February, which for me is a laughably optimistic deadline. Still, there's three already done... 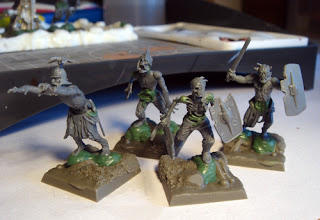 The running fellow is one of my favourite models from the entire unit. Originally the legs weren't in a running pose, but as I'm keen not to have some non standard zombie poses in the unit (yes, I know the guy on the extreme left is classic zombie posing, but you have to have one, don't you?) I adjusted the feet a bit so he looks like he's jogging along at a fair clip. I'm also pretty happy with the torso/head on this lad. Originally a grisly trophy held aloft by a ghoul, I think it makes a great basis for a bog mummy with the chest all disintegrated. Lovely. 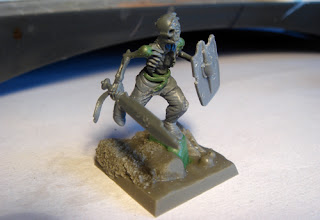 So, the next update will be the completely assembled unit, then, fair readers, it's painty time.
Posted by Mr Saturday at 12:09 PM