So, we stare into the blasted wasteland that is January. Traditionally my least favourite time of year, I refer to the months of January and February as 'the waiting room', as they are the most dreary of months. However, they are great for getting some hobby time in, so this year I will endeavour to make the most of these two grey months and get some stuff made and painted! 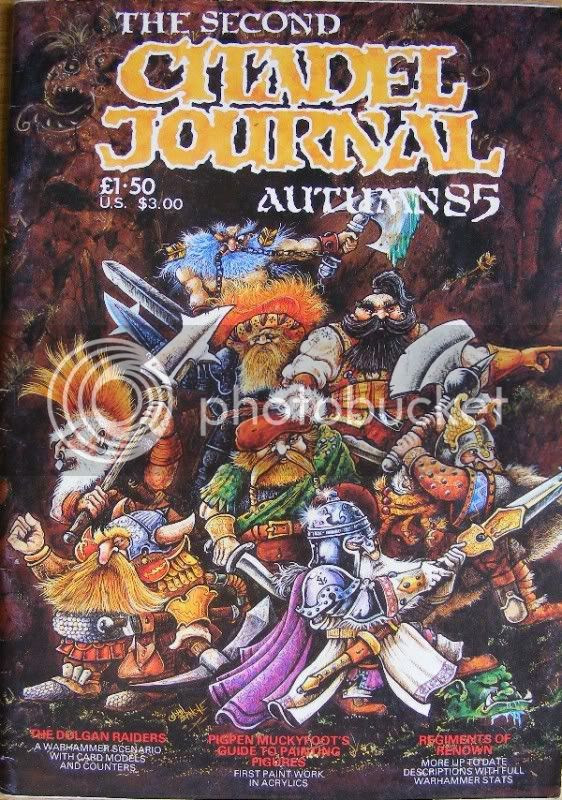 Over the holidays I came into possession of two of the first three Citadel Compendiums, and the second (first version) Citadel journal. Treasure troves of old school warhammer yumminess, they kept me entertained over the holidays with old warhammer scenarios, pages of Citadel miniatures from the golden age of the 80's, the first Kaleb Daark comic strip, even some shield and banner designs and some cardstock terrain! Ah, happy times. Now I just need to track down the rest of these old slices of Citadel nostalgia. I believe there were four journals and three compendiums all in all.

On a more 21st century note, I received the new chaos warshrine as a Christmas present. A great kit, though I wouldn't really be interested in assembling it as intended. No, this beauty is going to end up as a fimir war altar. I have a lot of hacking and sculpting planned for this model. I think turning the mutant bearers into fimir warped ones will be my favourite part of the project, though making a human-scale dirach to stand at the front of the altar will be good fun too. I may magnetise him so I can use him on a 25x25 base as an extra wizard if needs be too. I have yet to do any magnetising apart from bases and movement trays, but I can see the advantages for variety and ease of transport, especially on the newer Games Workshop kits, which are awkward sizes with lots of slender pointy bits.

Right at the moment, I am sculpting detail onto the half dead unit's slave driver filler. He's coming on nicely, and I think will look the business once he's done. There was some jiggery needed to get him in the pose I wanted, as all the GW savage orc arm positions are locked, but that wasn't going to put me off, no sir. I'll post up some photos once he's complete.
Posted by Mr Saturday at 2:41 PM